The National Security Strategy Will Work 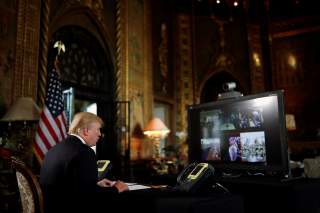 President Donald Trump’s new National Security Strategy codifies what has already been a noteworthy shift from his predecessor’s worldview. It is the difference between “leading from behind” and actually leading.

Early on, the president established a national objective of creating “a more peaceful world, with less conflict and more common ground.” The core strategic concept in pursuit of this objective is “peace through strength.”

In doing so, the White House is returning to a time-honored strategic model. Peace through strength was the guiding concept of President Ronald Reagan’s national security strategy in the 1980s. Reagan understood that American weakness invites aggression. At the time, America’s power and prestige were severely diminished in the wake of the Vietnam War, while the Soviet Union was at the peak of its power. Pundits talked about the “hollow forces”—military capabilities that were undermanned, underfunded and undermotivated. Some saw the United States as a faded power that was past its prime, with the country on the downhill slope, never coming back.

But we did come back. President Reagan energized the economy, rebuilt the military and restored national pride. He engaged our Cold War adversary using all the tools of national power available to him short of open war. And today, the Soviet Union is just a memory. Peace through strength prevailed.

In the last decade, the United States again stepped back from its critical leadership role, and there was a predictable increase in global disorder. The Islamic State and other translational radical Islamist groups expanded in the Middle East and North Africa. A civil war in Syria spawned a refugee crisis and foreign intervention. Iran expanded its illegal missile program and support for terrorism. China pressed its claims to the South China Sea. North Korea continued its provocative nuclear and missile programs. Russia made opportunistic moves on its periphery. And our own country’s poorly controlled borders encouraged illegal immigration, arms and human trafficking, and narcotics smuggling.

The Trump administration has sought to reverse these trends, and the past year has seen a great deal of progress. The new strategy recognizes that the national economy is the center of gravity: the source of our power and influence. No country can long maintain military preeminence without a strong economic base to back it up. Every period of American global strength came about because of a robust economy; every period of economic decline has given birth to international crises. Thus, a critical strategic pillar is to promote prosperity; to restore the U.S. economy as the number one international engine of jobs, innovation and opportunity, and embrace America’s emerging energy dominance while discarding sideshow issues like climate change.

Robust economic growth gives the United States the means to rebuild military forces worn down by decades of conflict, budget cuts and misplaced priorities. It also allows strengthening other elements of national power, whether they be diplomatic, industrial, financial, intelligence, space, cyber or law enforcement. This gives the president a full array of options to respond flexibly to global instability, and be able to take the steps appropriate to the specific challenge. The very fact that we have these capabilities will make potential troublemakers think twice, and prevent crises before they occur.

The strategy also joins these capabilities with commitment. Much of the world expects the United States to provide a steady hand in global affairs. In recent years, some allies have doubted whether America would continue to back them up, while adversary states have shown open contempt. That trend has been reversed. The Trump strategy recognizes that one of America’s greatest strengths is our ability to work with trusted partners in pursuit of common goals. An “America First” strategy does not mean abandoning multilateral efforts in pursuit of common values and interests. Rather, it means leading by example and encouraging other states to join in a coalition of free countries that represent “a positive alternative to political and religious despotism.”

At the same time, the strategy puts adversary states, terror groups and criminal syndicates on notice that any attack on the United States or its allies will be defeated, and any use of nuclear or other banned weapons will be met with an effective and overwhelming response.

Overall, the new national security strategy is a realistic, commonsense framework in which the United States will act as a global leader, not a bystander. The strategy renews the concept that a strong United States is the best guarantor of global peace and prosperity. And if affirms the understanding that peace is not a final destination, but a continuing journey.