The "Near-Abroad" Factor: Why Putin Stands Firm over Ukraine 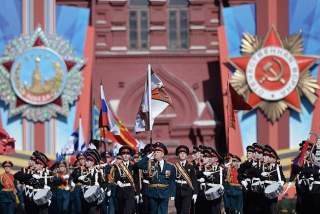 President Vladimir Putin has been hesitant to acknowledge Russia’s role in the escalating violence and instability in eastern and southern Ukraine. Striking a more conciliatory tone, Mr. Putin recently announced a plan to pull back Russian troops from the border in order to ease tensions. Few in the West seem to be buying it, however. Mr. Putin’s credibility was deeply undermined by his past denials of Russian special forces in Crimea, and by the absurd claims that last month’s military exercises on Ukraine’s border were simply routine. As much as the recent aggression in Ukraine flies in face of Mr. Putin’s oft repeated mantra of Russia’s commitment to international law and respect for national sovereignty, in fact his stance is compatible with the ways past Russian leaders have often treated the “near abroad.”

For centuries, Russia has sought to ensure its physical security through its control over neighboring territory. In Russia, the notion of “empire” was not based upon acquiring control over distant unconnected territories on faraway continents, as the British and the French did. Rather, for Russia, an empire was built through acquisition of contiguous territories. This approach to security has left Russia, even after losing its Soviet empire, the largest country in the world geographically. Furthermore, Russia has always made the near abroad—as the territory surrounding Russia’s borders is called—a priority. And while Mr. Putin acknowledged the impossibility of restoring the Soviet Union, he also found unacceptable any further unraveling of Russia’s territorial integrity, for example through the loss of secessionist regions in the Caucasus. His first actions as Prime Minister and acting President were to prevent Chechen independence, even if this required tremendous brutality and violence against Russian citizens in Chechnya.

The geopolitical order in the post–Cold War era, in which not only the countries of Eastern Europe but even the former Soviet republics in the Baltic region, had become members in NATO and the European Union, must have troubled Mr. Putin greatly. Having these bodies expand any further, including right up to Russia’s doorstep with the potential incorporation of Ukraine, was positively unthinkable. Having Ukraine sign the Association Agreement with the European Union, opening the door for future membership, had to be stopped in its tracks, through material incentives if possible, or by military means if necessary. As recent events make clear, for Mr. Putin the line in the sand was Ukraine.

Despite Foreign Minister Sergey Lavrov’s commitments in Geneva to work toward stabilizing eastern Ukraine, it is clear that Russia has no intention of doing so. Western leaders should not expect meaningful cooperation before Russia achieves its primary objective—preventing Ukraine’s Western realignment.

While it looks more and more likely that eastern or southern Ukraine could go the way of Crimea, especially after the recent tragic violence in Odessa and the referenda in Donetsk and Luhansk, an invasion may not be necessary to satisfy Russia’s security objective. A less costly way could be for Ukraine to become a federation. The proposal of a Ukrainian federation may have some odd conditions attached, like the center’s inability to borrow money without the approval of two-thirds of Ukraine’s regions. However, the alternatives to a federation, which include civil war, seem much worse. Until now, Kyiv has strongly resisted a solution that involves a federation with strong powers residing in the regions. And from the Russian perspective, some further convincing seems required. Mr. Putin understands he will be much more persuasive if the threat of invasion remains highly credible. Therefore, Western leaders should not count on Russia to work toward stabilizing eastern Ukraine before Kyiv at the very least demonstrates its commitment to new political institutions, since, along with the tens of thousands of well-equipped Russian troops on Ukraine’s border, widespread instability and the endangerment of pro-Russian Ukrainians make the threat of invasion highly credible and Russia’s bargaining position stronger.

That said, Russia’s willingness to invade eastern and southern Ukraine is no bluff. Western leaders should assume that averting conflict is not the priority for Russia, if it means losing Ukraine in the long term. The tragic deaths of pro-Russian activists in Odessa, Mariupol and other cities have provided President Putin with the justification he claimed to need to engage militarily across sovereign borders.

Thus, despite Mr. Putin’s acknowledgement of the use of Russian forces in Crimea, the agreements in Geneva to promote stability, or Russia’s softer tone, no one should expect pro-Russian separatists in Ukraine to pack up any time soon. Nor should anyone expect Mr. Putin to back down. Even if Western leaders cannot know whether Russia’s aim to strengthen its political control over the “near abroad” involves plans to annex additional Ukrainian territory beyond Crimea, they should at the very least be prepared to face a Russian government willing to pay a high price and take unimaginable risks to prevent Ukraine from slipping any further into the West’s orbit.