The Neoconservatives' Fairy Tales about Syria 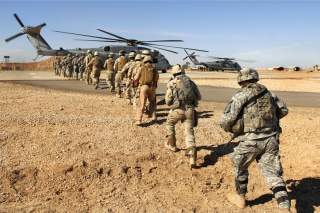 The prince of paradox had a point. But we should also bear in mind that some stories about vanquishing monsters are dangerously false. This is especially the case in Iraq, where a fairy tale has grown up around our long war there.

The dragon in question is the sectarian conflict that was unleashed after the United States deposed Saddam Hussein. Neoconservatives and hawks have dreamed up a yarn that goes something like this: Iraq was initially roiled with violence, thanks to Sunni and Shiite uprisings. It fell to the gallant George W. Bush to ride to the rescue and heroically order a troop surge. This led to peace throughout the land—until the yellow-bellied Barack Obama pulled out the troops, which undermined the Sunnis in western Iraq and ushered in ISIS.

It’s a fairy tale worthy of Mother Goose, but it persists in the minds of many intellectuals. In fact, while violence in Iraq did indeed drop off precipitously after the surge, this had less to do with our troop escalation than it did with General David Petraeus’ ceasefire deals with Sunni warlords—which often involved generous payouts. It was a purchased peace and not everyone was comfortable with it. In 2008, General Douglas MacGregor prophetically warned that “buying off your enemy” is “not a long-term solution to creating a legitimate political order.” Meanwhile, Shiite militias with ties to then prime minister Nouri al-Maliki were ethnically cleansing Baghdad of Sunnis right under President Bush’s nose. Maliki’s policy toward the so-called Awakening Councils also turned ruthless.

The result was an Iraq that was more fragmented down sectarian lines than ever before and united only by an ephemeral peace that was inevitably going to collapse. This was not victory and Obama’s adhering to the Status of Forces Agreement he inherited from Bush was not surrender. Had Obama left a contingent of troops behind—as he attempted to do—they would have lacked the authorization of the Iraqi parliament and been stripped of official legal immunities. No commander-in-chief could have countenanced that.

The Iraq war fairy tale is appealing because it portrays a monochromatic world that rewards virtues like strength and persistence while punishing vices like weakness and cowardice. Of course, this isn’t how foreign policy works—and yet those same elements are now being woven into a second mythical story.

This one is about Syria and, once again, it stars the hapless boy king Barack Obama, who’s spent the past two years bumbling and stumbling after Bashar al-Assad allegedly used chemical weapons on his own people. The moral of the story is that, had Obama listened to his tragically ignored hawkish advisors and armed the moderate rebels fighting Assad’s regime, he could have saved Syria. The notably lionhearted Marco Rubio advanced this argument in the last presidential debate.

President Obama’s handling of Syria has certainly lacked for adroitness. But this is in part because he adopted the preferred policies of hawks like Rubio. The United States has been arming and training so-called “moderate” Syrian rebels since at least 2013, first through the CIA, to the tune of $1 billion a year, and then through the Pentagon, whose program was recently suspended after it admitted only a handful of recruits had actually been deployed. The result of this has been wholly predictable, with American-trained rebels relinquishing their weapons to Al Qaeda and ISIS fighters brandishing U.S.-made anti-tank missiles.

Even if we’d been more tightfisted with the Free Syrian Army, our Gulf State allies would have made up the difference. Saudi Arabia and Qatar pushed in all their chips on a post-Assad Syria and funneled untold weapons to the rebels. Qatar even overrode American objections and sent in heat-seeking, shoulder-fired missiles, which could potentially be used by Al Qaeda to blow civilian airliners out of the sky. As the Saudis became further immersed in Syria, thanks to the precocious Prince Salman, they began openly working with al-Nusra, Al Qaeda’s Syrian franchise.

This should have been a warning light that al-Nusra—and Islamism in general—was too integrated into the Syrian insurgency to be neatly weeded out. Our intelligence agencies were cautioning all the way back in 2013 that Al Qaeda was the best-equipped rebel faction, thanks to the Islamist fighters flooding across Syria’s borders. By May of that year, thousands of Free Syrian Army militants had reportedly defected to al-Nusra. The utility of a powerful and energetic paramilitary group fighting Assad—the enemy of my enemy is my friend—proved too alluring. As Syria expert Charles Lister wrote earlier this year, “In fact, while rarely acknowledged explicitly in public, the vast majority of the Syrian insurgency has coordinated closely with Al Qaeda since mid-2012—and to great effect on the battlefield.”

The notion that America could have propped up the Free Syrian Army, hermetically sealed it off from al-Nusra, plugged up Syria’s 1,408 miles of land border, talked down the Gulf states, deployed enough secular rebels to overthrow Bashar al-Assad and done it all without bolstering thuggish Sunni jihadists is far more fantastical than anything Tolkien ever came up with. Sometimes horrific things happen in the Middle East irrespective of American power. Sometimes our involvement can only make them worse.

That doesn’t make for a very soothing bedtime story, but it does have the benefit of being true. The fairy tales emerging from Iraq and Syria are dangerous because they offer a facile conception of American power that’s able to pacify conflicts simply by virtue of being invoked. They also plug our ears to the lessons we need to learn after fifteen years of war in the Middle East. Unfortunately, in that troubled corner of the world, happily-ever-afters are hard to come by.