The Neverending Debate: The Legacy of Richard Nixon 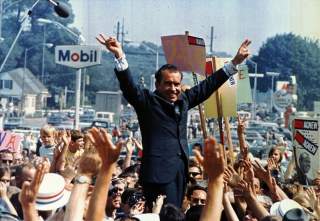 As we hit the fortieth anniversary of the only presidential resignation in our history, it’s a good occasion to explore the two fundamental views of Richard Nixon, which correspond to the two views of politics—and, for that matter, two views of life. In that way, perhaps, we can derive some meaning from the man who brought down upon himself the greatest degree of political obloquy in the American story.

One view is that Nixon was simply evil—always had been, always would be. Ultimately and inevitably, his evil was exposed, and the nation expelled him. Yet the Nixon-as-evil adherents never quite seem satisfied with his political fall and humiliation. They were outraged when his unelected successor, Gerald Ford, pardoned the man, thus depriving them of the thrill of seeing him escorted off to jail in handcuffs. Even four decades later they seem obsessed with this disgraced figure and his ongoing evil.

A distilled example of this outlook is Washington Post columnist Richard Cohen, who writes that Nixon “fouls our politics to this very day.” This because he devised a “Southern Strategy” that brought disgruntled Southern conservatives, theretofore Democrats, into the Republican Party. This, suggests Cohen, has distorted our politics ever since. It was “morally reprehensible.” Nixon, he writes, was “a man of such character flaws, resentments, hatreds and insecurities that it’s hard to keep your eyes off him.” The Nixon-as-evil people will never take their eyes off him and never stop blaming him for whatever ills they perceive in the nation.

The other view is Nixon as tragedy. This view fully acknowledges his character flaws, including his insecurity, resentment and urge to lash out at those he perceived as enemies. But they see other, larger qualities in the man that contributed to some serious political accomplishments. Thus, those character flaws emerge as tragic flaws and Nixon emerges as a tragic figure, like Lear or the Mayor of Casterbridge. This is a far more interesting story that perhaps requires a bit more human perspective to understand.

An exploration of the two views of Nixon might begin with an exploration of Cohen’s thesis that Nixon fouled the American polity for decades with his Southern Strategy. As explained in his column, the story goes like this: Southern white voters, by tradition stretching back to the Civil War, had been Democrats, but with the civil rights legislation of the 1960s, enacted under Democratic auspices, those Democrats became alienated from their party. Along comes Nixon and invites them into the Republican Party, thus turning the GOP into a party of racism. He notes that, before this Nixon action, the Republican Party had been “largely unencumbered with a Southern constituency,” and many African-Americans voted Republican. But now, he says, just look at the GOP, filled with the “fellow travelers” of racists—“creationists, gun nuts, anti-abortion zealots, immigrant haters of all sorts and homophobes’’—in other words, enemies of “modernity.” Thus, in Cohen’s view, Nixon’s Southern Strategy paved the way for every nut and kook that agitates the serenity of Cohen’s morning coffee time.

“The worst thing Richard Nixon ever did,” writes Cohen, “was tell racists they had a point and welcome them into the party of Lincoln.”

This cries out for some historical perspective, and the pursuit of perspective gets us right to the heart of the two views of Nixon. Cohen quotes Wikipedia, of all entities, as saying the Southern Strategy was an appeal “to racism against African-Americans.” Wikipedia also says that it represented a search for “a middle way between the segregationist [George] Wallace and liberal Democrats, whose support of integration was alienating some Southern voters.”

You wouldn’t know it from Cohen’s column, but this was a time of serious racial tensions in America. The civil rights legislation of the mid-1960s, a necessary corrective to a century of abuse in race relations, nevertheless unleashed significant political consequences. Opponents, or their children, had to come to terms with it, and serious political analysts understood that that would occur only over time. But in the meantime, the issue presented some raw political nerves and delicate political challenges.

On top of that, the country experienced some ominous race riots in major cities, not in the South but in the North—Los Angeles in 1965; Detroit, Newark and other cities in 1967; Washington, D.C., and many other cities in 1968. History tells us that few developments generate more political anguish than riots in the streets that turn violent and bloody (just behind serious economic dislocation). Americans expect their government to maintain domestic order and tranquility.

Into this political maelstrom strutted that bantam rooster of a politician, George Wallace of Alabama. Running as an independent presidential candidate in 1968, he collected 10 million ballots, 13.5 percent of the popular vote. He carried five states with forty-six electoral votes. This was a pretty serious development, reflecting the country’s lingering need to absorb the new civil-rights realities and to grapple with race riots that were both ominous and scary to many Americans.

Where, Mr. Cohen, were those 10 million Wallace voters going to go if Nixon had, say, attacked them to make clear they weren’t welcome in the Republican Party? Oh, I get it. They would have merely disappeared. They would have perhaps fallen silent or just slunk off to Pago Pago or maybe all committed suicide out of shame that they couldn’t live up to the political rectitude of the likes of Richard Cohen.

No, in our democratic system, large pools of political sentiment must get absorbed somehow into the polity, which, in turn, means they must be domesticated. Nixon understood this in a way that Cohen, even now, doesn’t. This was all captured at the time by White House counselor Daniel Patrick Moynihan, later U.S. ambassador to the UN and a Democratic senator from New York, who wrote in a memo to the president that a sound racial policy at the time would be “benign neglect.”

Moynihan was no racist. His point was that the process of political absorption must be given some time to progress and that the government needed an approach to the race riots of the day that didn’t exacerbate the situation, either with angry blacks or with frightened whites. Meanwhile, Nixon took a measured but serious approach to school integration, as required by Supreme Court rulings, and launched the so-called Philadelphia Plan requiring federal contractors to hire more racial minorities. This was the country’s first affirmative-action program—hardly racist in intention or outlook. It is worth noting that the effort to push school desegregation, leading to the bussing of school children, generated a serious political backlash during Nixon’s presidency—again, not so much in the South, but in the North. This suggests further the complexity and delicacy of racial politics at that time.

All of this gets us to the two glaring flaws in Cohen’s reasoning. First, why do liberals absolutely refuse to acknowledge any progress in American race relations since the days before the civil-rights legislation of the 1960s? We all can see that progress—in hiring, in promotions, in attitudes, in interaction among the races, in minority accomplishment that would have been thwarted in the old days. And yet people like Cohen insist, against all the evidence, that we have remained frozen in time, that George Wallace remains as politically resonant today as he was in 1968. Sure, the issue merits ongoing attention and vigilance, and Cohen should advocate that in his columns. But to suggest that an effort four decades ago to absorb and domesticate the Wallace vote still “fouls” our nation is worse than silly. It is—to use his word—journalistically reprehensible.

Second, it is a flight of political fancy of the most outlandish sort to suggest that Nixon’s political coalition-building brought forth all the political movements and attitudes that Cohen so clearly despises today—people, for example, who loath late-term abortion, or who lament the decline of traditional marriage as part of the American culture, or struggle with the clash of secular and religious views, or embrace the Second Amendment in clinging to their right to possess guns. All those issues—and all those political sentiments—emerged out of political developments that have arisen since Nixon’s humiliating abdication and had nothing to do with him—and certainly nothing to do with his Southern Strategy. To conflate these things is to betray a hopelessly flawed perspective of politics—and of the human experience. It is a perspective that sees politics in terms of good and evil.

Which is of course the perspective that people such as Cohen bring to the matter of Richard Nixon. He was evil. The evil lives on. End of story.

Dull story. The more correct, and far more haunting, perspective is the one that views Nixon as a tragic figure whose political brilliance and often sound intentions were overwhelmed by his own outsized flaws. In this view, one might even conclude that Nixon’s delicate handling of race relations at a time when racial politics threatened to become dangerously incendiary merits some approbation. Certainly, we can see that his opening to China helped stabilize an erratic region. As Post columnist David Ignatius noted, that represented great presidential decision making, unencumbered by past attitudes.