The New Afghanistan Policy Is Set. The Question Is How to Implement It. 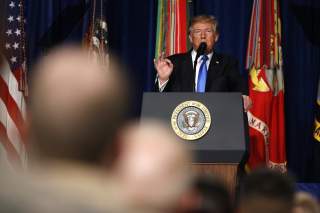 The focus now should be on the implementation of the new U.S. strategy for Afghanistan and the region. Commentators debate the pros and cons of the approach, but it is now U.S. policy. It requires careful coordination and integration of the tools of American power—military, diplomatic, economic and development—to move toward its objective: a negotiated Afghan political settlement. The policy’s specifics must now be defined and executed.

The rationale for continued U.S. engagement—to prevent Afghanistan from again becoming a base for terrorist attacks as it was in 2001—carries much weight given the threats from radical and terrorist groups emanating from Afghanistan, Pakistan and across the region. “Right now (the Taliban) calculates that it can win,” argues a senior U.S. official, and if the United States were to leave precipitously the outcome would be “a state of chaos.” Yet, the tools and actions needed go far beyond “kinetic” actions.

The U.S. approach needs to address: 1) the situation in Afghanistan itself (political, economic, development and military); 2) the role of Pakistan as an enabler of the Taliban and other violent groups and as a possible facilitator of peace; 3) the regional context: other neighbors and key players who can help or hinder a peace process and the India-Pakistan rivalry, which adds a nuclear dimension; 4) the important role of U.S. allies and partners in Afghanistan and in forging a path to peace; and, 5) the objective of achieving a negotiated political settlement which incorporates the Taliban.

American officials stress that the United States is not going to set “artificial” deadlines but will focus on achieving desired conditions on the ground. They also highlight that this strategy integrates Afghanistan into an overarching policy for the region. This will include intense engagement with Pakistan so that it takes decisive action against terrorist groups and helps get the Taliban to the negotiating table. The regional approach will also involve efforts reduce Pakistan-India tensions, including trying to lessen nuclear dangers from that rivalry. This is no easy task set.

Much attention is given to the U.S. troop presence and their security roles, but to succeed this approach needs strong and effective diplomacy, artfully employed. The U.S. policy process certainly needs to get right the specifics about the active U.S. military support for Afghanistan’s security forces in the field, how to improve U.S. training (and equipment provided) for government security forces, and what nonmilitary aid produces good results. But, if U.S. diplomacy inside Afghanistan, with Pakistan, and with other key international players is not effectively and creatively executed, the U.S. strategy will not create a situation in which the Taliban concludes that it will gain more from a peace settlement than continuing to fight.

Having argued for such a comprehensive approach, I know implementation will require exceptionally close U.S.G. coordination. An end game will not come rapidly, even under the best scenarios. Changing the situation sufficiently so that the Taliban are ready to engage seriously in finding a peaceful political solution will persistence, patience and artful use of U.S. tools across multiple lines of action. Effective ways to assess progress and adjust will be essential.

Administration officials say they will work inside Afghanistan with the government of President Ashraf Ghani to build the capacity and performance of security forces, to improve governance and to encourage better economic performance. They correctly point out that whatever his shortcomings, Ghani has long been committed to reform and fighting corruption. Afghanistan and the United States have forged a new “Compact” whereby President Ghani, Afghan CEO Abdullah Abdullah and other ministers will meet regularly with the U.S. Ambassador, the U.S. military commander and top aides to review and assess progress in four areas: security, governance, economic development and the peace process. They have identified benchmarks emanating from earlier bilateral agreements and commitments made to donors and partners during major gatherings of NATO and development partners in 2016.

Reflecting the political stalemate that has blocked and slowed Afghan government progress, U.S. officials say the Afghan government must demonstrate that it is a willing and stable partner that will pursue inclusive government, effective efforts against corruption and credible elections. This is line of work is key in setting the scene for long-term success, a senior U.S. official argues: it is not an end in itself and not nation-building. At the same time, Afghans tell me that while welcoming the recommitment in President Trump’s speech, many worry that the U.S. may focus too much on military assistance, and not on continuing to improve the daily lot of citizens and, thus, Afghan government’s legitimacy.

Ghani has demonstrated commitment to fighting corruption in the military and bureaucracy and improving government performance, but implementation of reforms will likely continue to be a slog. Donors complain that key Afghan ministries that are supposed to be leading reform are still performing below expectations, e.g., in low budget execution. Afghan politics have become more critical of Ghani, making it more challenging to forge agreement on holding parliamentary elections or on political reforms being sought by some Afghan political forces. Ghani and Abdullah will face pressures to cut political deals at the expense of reform. The U.S. Ambassador will need to lead creative, effective diplomacy to work through these kinds of issues. He and other U.S. officials must work closely with international partners and Afghan figures outside the government to facilitate progress. They will also need to be rigorous in measuring progress and ensuring corrective actions as needed.

From the U.S. perspective, the details of enhanced U.S. security advisory role, active support for Afghan forces, and an improved training program need to be spelled out and put into action. On the governance and development front, the United States needs to carefully review current programs and examine ways to better assure their effectiveness, especially as the security situation has made it nigh impossible for American officials to visit projects. Commentators stress the importance of reducing corruption and pursuing reform to build legitimacy for the government.

Key Roles for Allies and Partners

Maintaining, and if possible expanding, allied and partner support for security and development aid to Afghanistan is very important. Almost forty countries maintain some six thousand troops in Afghanistan, and have committed several billion dollars over four years in security aid at the 2016 NATO summit. Similarly, in the Fall of 2016, over seventy donor nations and international organizations committed to provide $15 billion in multi-year development assistance to support governance reform and economic growth, but only if benchmarks and performance conditions are met by the Afghans. The United States and others agreed to funnel more money through international trust funds and the Afghan government. The system for measuring results needs to be rigorous, from tax collection, project implementation, and fighting corruption, to creating jobs and growth in the agricultural sector and urban markets. Nearly 40 percent of Afghans are unemployed, most of them young people. Afghanistan also needs progress in developing mining and natural resource projects while reducing illicit commerce. Enhancing the role of Afghanistan’s private sector is vital for growth. In May, the IMF found Afghan performance “satisfactory” but needing sustained reform to produce the higher economic growth needed for job creation and increased living standards. Having coalition partners engaged adds leverage and eases the U.S. burden. Additional investment from actors like China might also help.

American comments about Pakistan’s negative role in the region, such as giving shelter to the Taliban and other terror group, are a hallmark of the new Afghanistan policy. Some argue that the United States won’t get Islamabad’s attention/cooperation without using sanctions or attacks against insurgent and terror targets in Pakistan. Others note that President Trump’s frank comments about Pakistan’s role sparked very negative reactions in Pakistan, which will make dialogue more difficult.

U.S. officials, however, say they want to take up the conversation with Pakistan in private via diplomatic, intelligence and military channels. “Pakistan has a lot to gain by cooperating with us and a lot to lose,” as one put it. They say the United States wants to recognize Pakistan’s legitimate interests, sacrifices, and good anti-terror work, but that Islamabad needs to stop harboring groups that attack U.S. citizens and providing safe haven to Taliban elements. U.S. officials say they are willing to discuss a range of cooperative measures, including steps to improve security along the Pakistan-Afghanistan frontier. They express hope that Pakistan’s leaders will conclude that their country has much to gain from a mature relationship with the United States and by being a participant in a negotiated Afghanistan solution. Working through these issues and deciding what sticks and carrots to use amounts to very challenging diplomacy, especially given the divisions in Pakistan’s politics among civilian parties, its military hierarchy and between the military and civilians. Also, while President Trump described India as playing a development and economic role in Afghanistan, Pakistan’s apprehensions about any Indian role are deep. The U.S. ambassador and U.S. officials will have their hands full developing a productive dialogue and achieving the concrete actions policy makers in Washington seek.