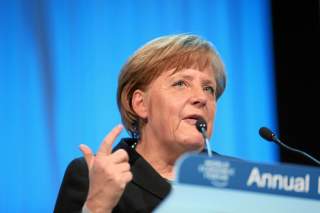 The Syrian conflict, and the resulting refugee crisis, should serve as a reminder that Germany’s foreign policy doctrine of recent decades, a much softer version of the Obama doctrine, urgently needs a reassessment.

Or consider the eurozone crisis. As president of the European Commission Jean-Claude Juncker told Der Spiegel this summer, the most imperiled moments of the crisis seem to have passed.

Think back to the year 2010, when the difficulties began. At the time, the danger was enormous that the contagion could spread to other countries. Had Greece left the euro then, it could very well have turned into a conflagration for the entire euro zone. Today, a Grexit would still have significant consequences, but the fear that it could cause the exit of additional member states has waned considerably.

A semblance of stability has come to the common currency, and largely through German influence. As David Art argues in Political Science Quarterly,

Merkel has taken the unwelcome opportunity of the sovereign debt crisis to reassert long-standing German preferences on fiscal and monetary policy, and the German rescue of the Eurozone has come under German terms.

Merkel, Art writes, “has largely gotten her way.” But Merkel’s way has been to move slowly. Euro-wide collapse has been avoided, Germany wields more influence, yet just as with the movement of people and the status of foreigners, this has been done incrementally and incompletely.

None of the underlying issues has been settled, nor has a plan been set out for how each might be. The deficit and debt limitations ostensibly imposed by the Maastricht treaty and subsequent provisions are useless. The euro area remains a monetary union separate from a fiscal union, and as such risks becoming even more of a transfer union. The EU’s Five Presidents’ report published this summer buried plans for further integration in a paragraph toward the end, simply saying, “as the euro area evolves towards a genuine [economic and monetary union], some decisions will increasingly need to be made collectively,” adding that a “future euro area treasury could be the place for such collective decision-making.”

Since 2007 difficult decisions have been made, not least by Berlin, about how to stop imminent crises. But the euro zone remains in a purgatory of indecisiveness about its future. Without a credible path forward or, barring that, a responsible way to pull back plans for further integration, the eurozone will remain an issue around which European and German politics harden.

Until recently, Merkel has been highly attuned to public preferences, whether they are about European integration or about foreigners crossing borders. She has consistently acted to ensure stability and dampen political disputes in Germany. She has sought simply to govern. But the absence of resolution to these important issues threatens to amplify German preferences into more active political campaigning, and into more vocal challenges to the chancellor. Enterprising politicians will surely seek to raise their own status by running with these politics.

In short, more static and noise are entering the German decision-making process. And making decisions under the catchall heading of “pragmatism” as a cover for incrementalism may no longer suffice. How Merkel and future chancellors will govern such a Germany—whether it will mean more flip-flopping or decisive action, more domestic populism or foreign activism—is the newest 'German question' that remains to be answered.