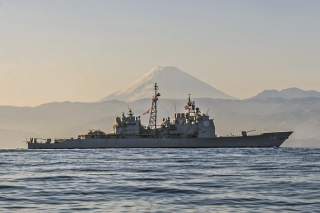 The nation’s three Sea Services have revised their 2007 Maritime Strategy, more formally titled A Cooperative Strategy for 21st Century Seapower: Forward, Engaged Ready. Changes in the world since 2007, new strategic guidance, and our current fiscal circumstances have compelled this revision. Security threats have become more sophisticated, widespread, and sinister. We face new or evolving threats from violent extremist organizations such as Boko Haram, al Qaeda in Yemen, and the Islamic State of Iraq and the Levant (ISIL); from Russia with its current unlawful aggression in the Ukraine; from North Korea and Iran; and from the proliferation of anti-access and area-denial (A2/AD) capabilities that threaten our access in cyberspace and in the global commons. Additionally, we face a rising China that presents both opportunities and challenges. In response to this new security calculus, the revised Strategy explains how the U.S. Navy will design, organize, and employ its forces in support of national security interests. It describes a Navy built and ready for any challenge from a high-end war to humanitarian operations.

From a U.S. Navy perspective, the 2015 Maritime Strategy identifies the biggest challenges to forward progress confronting the Navy and describes how it will design, organize, and employ its forces in support of our national security and defense objectives. It also sets Navy priorities in an era of constrained resources, while emphasizing warfighting capabilities and forward presence to protect our global national interests. It is a well-defined strategy to ensure our citizens and political leaders understand and support the Navy’s national security role, the necessity of the Navy’s existence, and the Navy’s resource requirements. A separate, Navy-only classified annex addresses the Navy’s strategic approach to regional threats and challenges.

The revised Maritime Strategy achieves its purpose by stressing the importance of seapower to the nation’s security and describing how the Navy will move forward through a coherent set of key Navy implementation actions:

- Sustain Forward Presence—Being Where It Matters, When It Matters;

- Continue to Strengthen Alliances and Partnership;

- Rebalance to the Indo-Asia-Pacific Region;

- Build the Navy of the Future.

The Importance of Seapower to the Nation’s Security

The United States is and will remain a global leader with world-wide interests and responsibilities. The geopolitical reality is that the United States exists as an island nation between two great oceans. These realities mandate that the United States must be a seapower nation if it is to influence global security conditions. Freedom and the capability to use the oceans are absolutely essential for any U.S. defense policy to insure the security of the United States and our allies and partners. The United States must have the ability to use the sea for whatever purposes are necessary to the nation, as well as the ability to deny its use to a potential enemy. Moreover, no matter what kind of military power the United States projects overseas—naval, ground, or air—the nation will always use the seas to sustain that military power. Indeed the Navy and all members of the Joint Force must be able to conduct their missions at a given time and place without prohibitive interference by any opposing force. In short the Navy must ensure that the United States in conjunction with its allies has maritime superiority sufficient to put at risk the survivability of any potential enemy.

Operating routinely from the sea, and not from land-based and fixed locations, the Navy advances and protects our national interests and responsibilities. Seapower is the ability to project military power or influence through the control and exploitation of the maritime domain to include the maritime littorals and the air above it, as well as space and cyberspace, to achieve strategic, operational, or tactical objectives. What makes sea power so crucial in current conditions is that it can exert its influence without resorting to force. It can be present without another country’s permission. Seapower offers mobility, both to engage where we wish and to disengage as we must in both cases at minimum cost.

Naval forces are essentially self-contained offensively, defensively, and logistically to insure U.S.strength and influence can always be exerted where and when needed. With their unique combination of combat power, mobility, sustainment, and multi-mission flexibility, these forces are well suited to a global security environment in which threats cannot be anticipated and prepared for long in advance. Moreover Navy forces operating around the globe in peacetime have the same capabilities as they would in time of war. They are armed and ready for action, designed to cross broad expanses of ocean space to conduct sustained, large-scale Joint military operations upon arrival wherever in the maritime domain.

Defending our nation and winning its wars is the core task of the U.S. Navy. The Navy must have the capabilities and capacities to defeat any adversary and defend the homeland and honor our alliances worldwide. The Service’s number-one responsibility is to deter aggression and, if deterrence fails, to fight and win our nation’s wars.

Because the maritime domain supports the bulk of the Joint Force’s forward deployment and sustainment, as well as enables the commerce that underpins the global economic system, the Navy and Marine Corps team places a significant premium on warfighting. To safeguard U.S. and partner nation interests, we must guarantee that the Navy and Marine Corps team, as part of the Joint Force, is prepared to oppose any nation’s actions that jeopardize access to and use of the global commons or that may threaten the security of our allies. We will ensure a modern and capable force that is “combat credible” because of its ability to project power against advanced air defenses, conduct and enable littoral/amphibious operations in opposed environments, and establish blue-water dominance against highly capable surface, sub-surface, and air threats. Above all, we must provide U.S. Combatant Commanders with versatile maritime forces.

The Navy guarantees strategic nuclear deterrence through its fleet of ballistic missile submarines (SSBN). These submarines provide the United States with assured, precise, nuclear second-strike capability. We are always at sea, patrolling undetected, in constant communication ready to strike at a moment’s notice. The Navy operates the most secure and survivable leg of the nuclear triad, and will maintain it at peak-performance and readiness.

We will ensure a dominant Navy and Marine Corps team as compared to potential adversaries and challengers. This means the capability to exert sea control when and where needed, to sustain operations in these areas indefinitely, to support and influence operations on land, and to ensure freedom of movement for a nation’s forces. It also means the capability to do high-performance TACAIR, high-tempo submarine operations, large-scale amphibious operations, power projection from the sea with precision strike, and joint and combined operations.

We will maintain our dominance by continuing operations and training in a range of capabilities that are unmatched by any potential challengers. We will exhibit the following characteristics: strategic and tactical mobility; kinetic and non-kinetic options for the use of forces to influence events ashore and at sea; tailorable packages of forces that are sustainable at sea for long periods of time; support and enable amphibious operations; assured access and protection for maritime and joint forces; and command and control of international maritime coalitions across a spectrum of operations.

The Navy’s increased attention on its warfighting mission is underscored by the Navy’s active role in the on-going Operation Inherent Resolve. Since the president ordered the first air strikes in December 2014, the Navy has been at the leading-edge of the Joint and international coalition conducting targeted strikes in Iraq and Syria to degrade and defeat ISIL.

The U.S. Navy is forward deployed primarily to project power into critical world regions, quickly. However, forward naval presence is central to everything we do. By operating forward the Navy also acts to protect U.S. interests and citizens; reassure allies and partners of U.S. political and military commitment; deter potential aggressors; support humanitarian and disaster-response needs; conduct counter-terrorism and maritime-security operations; and respond to crises rapidly, before they escalate into more costly conflicts.

U.S. Navy forward presence can be visible or invisible, large or small, provocative or peaceful, depending upon what best serves U.S. interests. The sight of a single U.S. warship in the harbor of a friend can serve as tangible evidence of the United States’ close relations with or commitment to that country. The U.S. Navy can modulate presence to exert the degree and kind of influence best suited to resolve the situation in a manner compatible with U.S. interests. In a crisis where force might be required to protect U.S. interests or evacuate U.S. nationals, but where visibility could provoke the outbreak of hostilities, U.S. Naval Forces can remain out of sight, over the horizon, ready to respond in a matter of minutes.

The U.S. Navy, unlike land-based forces, does not have to rely on prior international agreements before taking a position beyond a coastal state’s territorial sea in an area of potential crisis. U.S. Naval Forces do not have to request overflight authorization or diplomatic clearance. By remaining on station in international waters, for indefinite periods of time, naval forces communicate a capability for action that ground or air forces can duplicate only by landing or entering the sovereign air space. U.S. Naval Forces can be positioned near potential trouble spots without the political entanglement associated with the employment of land-based forces.