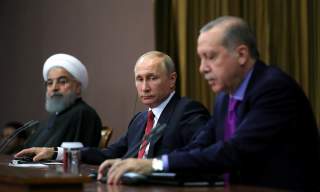 “Both Russia and Turkey think the decision of the U.S. to recognize Jerusalem as the capital of Israel is not helping the situation in the Middle East,” Russian president Vladimir Putin said during a December 11 press conference in Ankara. The leaders were meeting for the eighth time in 2017, a sign of increasingly close relations after the nadir in November 2015 when Turkey shot down a Russian fighter jet. At the same time, Turkey has grown closer to Iran over the past few months. Together with the talks in Astana aimed at ending the Syrian conflict, Iran, Russia and Turkey are cementing ties as they plan the post–ISIS Middle East. If this trend continues, then it will have major ramifications for U.S. policy, the West and U.S. allies such as Saudi Arabia and Israel.

Putin’s December meeting with Erdogan came in the context of Erdogan’s call for an emergency meeting of the Organization of Islamic Cooperation to condemn President Donald Trump’s decision to recognize Jerusalem as the capital of Israel. Russia already recognizes West Jerusalem as the capital of Israel but wanted to show Turkey that it is sympathetic to Ankara’s position. At the same time Turkish and Russian officials were finalizing a deal to sell Turkey the S-400 missile system. Buying Russian military equipment is symbolic of the fact that Turkey and Russia, which have backed different sides in the Syrian conflict, see much to be gained by working together.

Turkey was able to convince Russia to postpone a peace congress scheduled for Sochi in November. According to Erdogan’s spokesperson Ibrahim Kalin the main sticking point was Russia’s invitation to the Kurdish PYD party, which controls the People’s Protection Units or YPG in eastern Syria. Turkey views the YPG as part of the Kurdistan Workers Party and as a terrorist organization. However Russia has had amicable relations with the PYD over the years of the Syria conflict. This may now be changing as Moscow looks to Ankara. The United States is closely allied with the Syrian Democratic Forces, of which the YPG is a major component in eastern Syria.

When the Astana talks began and Russia, Iran and Turkey were invited, they appeared to be a way to reduce conflict in Syria and were heavily stacked in favor of the regime of Bashar al-Assad. Russia and Iran are the main backers of Assad. The talks have been successful at creating de-escalation zones in Idlib and southern Syria near Jordan and Israel. When Rouhani, Putin and Erdogan met in Sochi on November 22 they agreed to make “every effort to resolve the primary task of establishing peace and stability in that country and preserving its sovereignty, unity and territorial integrity.”

Russia has also sought to reduce its forces in Syria. Before Putin met Erdogan on December 11 he traveled to Khmeimim air base in Syria and announced that Russian soldiers were coming home. “Over slightly more two years the Russian Armed Forces have routed, together with the Syrian army, the most combat-capable grouping of international terrorists,” Putin said.

Erdogan has backed a Russian troop withdrawal from Syria. In November he was quoted in Hurriyet saying that if Russia believed there was no military solution to the Syrian war “then those who say this should pull their troops out.” It would appear Ankara has now received what it wanted, the withdrawal of most of Russia’s troops and the rescinding of the invitation to the PYD.

Iran is also growing closer to Ankara. As recently as February 2017 Iran had summoned the Turkish ambassador over comments by Foreign Minister Mevlut Cavusoglu criticizing Iran’s role in Syria. However, opposition to the Kurdistan Regional Government’s independence referendum in northern Iraq in September helped bring Iran and Turkey closer together. Rouhani and Erdogan smiled and laughed during a meeting in Tehran in October. After the December 13 OIC meeting, Erdogan and Rouhani met at the Yildiz Mabeyn Palace for forty-five minutes. They shared their common opposition to Trump’s Jerusalem move. On Jerusalem and on Kurdistan Iran and Turkey share similar views.

Russian, Turkish and Iranian media have all touted this new era of cooperation. PressTV reports that Russia, Iran and Turkey have agreed to protect Syria’s “integrity.” It highlighted an address by Russian foreign minister Sergei Lavrov to Russia’s Federation Council in which he said the interests of the countries don’t always coincide, but they agree on certain goals in Syria. Also, Sputnik, a Russian news organization, highlighted in November what it says were Turkish politicians praising Russia-Turkish-Iranian cooperation. Erdogan’s advisor, Kalin, warned in the Daily Sabah on December 2 that in post–ISIS Syria “a new power game is brewing.” He argued that the United States in eastern Syria was attempting to be a counterweight to Russia and Iran. In this case, Turkey’s cooperation with Iran and Russia is essential.

The Turkey-Iran-Russia entente is not welcome news for Washington. It has excluded the United States from talks in Astana, Sochi and elsewhere. The frequent meetings of these leaders, eight between Erdogan and Putin in 2017, show how the United States has been left aside. At the Woodrow Wilson International Center for Scholars Secretary of State Rex Tillerson claimed that Iran and Russia could not offer Turkey the economic and political benefits that “membership in the Western community of nations can provide.” This seems too little too late, and it is not clear if beseeching Ankara is effective.

For U.S. allies in the region the Ankara-Moscow-Tehran strategic cooperation is in stark contrast to the lack of meetings between U.S. leaders and those in Jerusalem, Cairo and Riyadh. Assad’s threats against U.S. Kurdish allies in Syria, calling them “traitors” during a meeting with Russian deputy prime minister Dmitry Rogozin on December 18, clearly indicate that the Assad regime feels empowered by this chain of events. Other countries in the region are looking to this triumvirate as well. Iraq’s prime minister Haider al-Abadi is close to Tehran, while Turkey has sent troops to defend Qatar. Jordan’s King Abdullah has also sought out Turkish support on the Jerusalem issue. Russia and Iraq have both declared victory over ISIS while the United States has said that there is more work to be done in eastern Syria. But with combat operations winding down, in 2018 the United States may find the frequent high-level discussions Iran, Turkey and Russia are having harder to ignore.