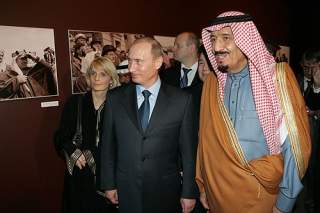 Saudi Arabia’s Deputy Crown Prince made a surprise visit to Russia last week, meeting with President Putin on the sidelines of the St. Petersburg International Economic Forum. Mohammed bin Salman’s visit—and his invitation to Putin to visit the King—only adds to speculation that, after several years of frozen relations, Saudi-Russian cooperation is finally improving.

This is good news: though a friendlier Saudi-Russian relationship raises some concerns for the United States, it may just be the key to a more stable and peaceful Middle East.

The meeting produced six agreements on issues such as civilian nuclear power and energy production. Announcements of the agreement’s contents were vague, and final details may not be known until Putin’s upcoming trip to the Kingdom. Possible areas of cooperation included space exploration, infrastructure development, and trade, all of which would boost the Russian economy.

The main agreement was a legal framework for civilian nuclear cooperation, with Saudi TV reporting that the country may pay Russia to operate as many as sixteen civilian nuclear power reactors. If accurate, such a deal would be hugely beneficial for both sides: Russia’s Rosatom would receive a lucrative contract, topping up government coffers, while the Saudis would be able to export significant amounts of oil and natural gas that are currently used to meet high domestic energy demand.

The growing cooperation between Saudi Arabia and Russia certainly raises some concerns for the United States, chief among them, Russia’s ongoing ability to mitigate U.S. sanctions by seeking alternative partners. Just like recent Russian trade, energy and finance deals with China, or its joint oil exploration venture with Norway’s Statoil, increased cooperation with Saudi Arabia offers the Putin regime a source of income, which can offset some of the losses from U.S. and European sanctions.

Russia’s attempts to find new trade partners are hardly unexpected, however, and last week’s agreements are otherwise largely innocuous. Collaboration on space exploration is uncontroversial, and though a new Saudi-Russian working group for joint oil and gas projects was announced, there was no agreement on the more impactful issue of oil production levels. There is also little need for the United States to worry about the nuclear agreement itself. Saudi Arabia has previously signed nuclear cooperation agreements with states like France, while the civilian cooperation discussed is clearly permitted under the NPT.

In fact, increased Saudi-Russian cooperation has the potential to be beneficial for U.S. diplomatic goals, particularly in the Middle East. The two states have had limited diplomatic relations since the conflict in Syria began, as strong Russian support for the Assad regime conflicted with the Saudi role in funding and arming anti-Assad rebels.

More recently, Russia has been at odds with Saudi and Western states over their approach to the ongoing crisis in Yemen, calling repeatedly for peace talks and a humanitarian ceasefire. Russia’s traditionally close relationship with Iran has provided much of the basis for animus between the two states; Russia supports an Iranian nuclear deal, for example, while the Saudis are strongly opposed.

Yet closer cooperation with Saudi Arabia would allow for better communication and more effective negotiations on key issues like Syria, Yemen, and ISIS. Though improved relations will not automatically resolve the many differences in opinion between Russia and Saudi Arabia, more frequent high-level diplomatic talks on these issues will be extremely helpful.

Though last week’s meeting focused primarily on trade issues, the two leaders reportedly discussed other issues, including Yemen and ongoing peace talks in Geneva. The forthcoming visit by Vladimir Putin to Saudi Arabia offers another excellent opportunity to focus on Middle Eastern security issues. Direct talks between Russia and Saudi Arabia on these issues lessen the burden on the United States to act as an intermediary, and increase the chances of cooperation.