The Next 9/11: What's the Next Impossible Terror Threat? 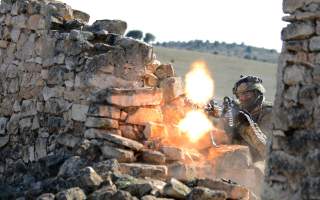 Over the past three decades, the terrorism threat has evolved from the detonation of a bomb in the World Trade Center’s parking garage, to the use of jetliners as missiles against the epicenters of American power, to the transformation of a truck into a weapon of mass destruction against a crowd of civilians along France’s southern shore. While the U.S. counterterrorism budget has doubled since 9/11 to reach $16 billion, nearly half of this expenditure funds the Transportation Security Administration, despite the notable shift in the terrorism threat away from civil aviation and towards soft targets. With Al Qaeda and the Islamic State of Iraq and the Levant proving profoundly agile and adaptive in the face of formidable countermeasures, the U.S. counterterrorism strategy remains stuck on the defensive, responding to evolving terrorist strategies, rather than anticipating and disrupting them.

In the 9/11 Commission Report, the “failure of imagination” was cited as an intrinsic weakness of the United States’ pre-9/11 counterterrorism strategy, along with significant gaps in inter- and intra-agency communications and capabilities. While the flurry of organizational reforms that spawned the Office of the Director of National Intelligence, the Department of Homeland Security and various mission centers addressed many of these vulnerabilities, the failure to imagine the unimaginable continues to undermine our nation’s counterterrorism prevention efforts. As President Trump embarks upon his ambitious inaugural promise to “eradicate radical Islamic terror from the face of the Earth,” he will need to prioritize imagination to forecast and materially combat burgeoning terrorist groups, along with their changing tactics and targets. However, before imagination can be wielded as an effective counterterrorism tool, a nuanced understanding of how the terrorism landscape has evolved is paramount.

Phase I: Al Qaeda and the Weaponization of the Airplane

The inception of the transnational terrorist threat in the new millennium arguably begins with the formation of Al Qaeda in 1988. In the 1990s, the late Osama bin Laden issued various declarations of holy war against the United States. His 1998 ruling is perhaps the most chilling: “The ruling to kill the Americans and their allies—civilians and military—is an individual duty for every Muslim who can do it in any country in which it is possible to do it.” Rhetoric turned into action with Al Qaeda’s 1998 U.S. embassy bombings in Tanzania and Kenya, and the 2000 bombing of the USS Cole.

Despite these warnings, and known intelligence that Al Qaeda was flirting with the tactic of suicide pilots—including evidence of a failed Al Qaeda plot to fly an explosives-laden plane into the CIA headquarters—U.S. officials could not conceive that planes could be used as weapons. As noted in the 9/11 Commission Report, in the years, months and days leading up to 9/11, counterterrorism officials were confined by the habit of dismissing seemingly unimaginable scenarios.

Phase II: The Threat Adapts and Shifts to Soft Targets

By the time ISIL claimed its resurrection of the caliphate in June 2014, the United States had significantly bolstered its counterterrorism capabilities. The creation of new institutions and policies—such as the Transportation Security Administration, the Federal Air Marshal Service and the fortification of cockpit doors—enabled the United States and its allies to thwart numerous terrorist plots, most notably the 2001 shoe bomber, the 2006 liquid bomb plot and the 2009 underwear bomber.

In 2015, ISIL eclipsed Al Qaeda by executing more visible attacks against western European and U.S. interests, and the nature of the threat changed. Given that the U.S. counterterrorism methodology was largely tailored to the Al Qaeda threat, the United States scrambled to learn the new rules of engagement in the redefined terrorism landscape; as the United States channeled resources towards preventing Al Qaeda’s signature coordinated, large-scale attacks, ISIL sidestepped arduous countermeasures to attack smaller-scale “soft targets” around the globe, encouraging sympathizers worldwide to act on their own initative. The United States, along with western Europe, has struggled to shield densely populated areas from terrorism, as demonstrated by the 2015 Paris attack, the 2016 Brussels attack, the 2016 Orlando nightclub shooting and the 2017 Istanbul nightclub attack.

Beyond the physical battlefield in cyberspace, the United States has similarly struggled to play from the offensive line in stemming the attraction of ISIL propaganda and interrupting the online radicalization of ISIL sympathizers. While several nonprofits and NGOs have made strong contributions to the “counter-narrative” campaign, the State Department’s counter-narrative campaign was widely criticized as ineffective in discouraging susceptible recruits from traveling to Syria. Given the growing number of ISIL sympathizers who are radicalized remotely and inspired to conduct attacks in their home countries, the need to counter ISIL’s ideological penetration of social media with imaginative and resonant countermessaging is as important as fighting the group on the battlefield in Iraq and Syria.

The frequency of ISIL-inspired attacks, many of which are performed out of opportunity, mental illness, or revenge, rather than an ideological adherence to ISIL, makes the accuracy of future predictions immensely difficult. However, an understanding of the different playbooks by which Al Qaeda and ISIL determine their strategies can get us one step closer to staying ahead of the threat.

In ISIL’s propaganda and publicized declarations, the group constantly signals who and what it will target next. In September 2014, when ISIL’s operations were largely confined to Iraq and Syria, ISIL’s late spokesman Abu Muhammad al-Adnani issued a statement signaling the group’s intention to expand internationally: “Kill a disbelieving American or European . . . or an Australian, or a Canadian, or any other disbeliever from the disbelievers waging war, including the citizens of the countries that entered into a collation against the Islamic State.” In contrast to Al Qaeda’s inclusion of complicated bomb-making manuals in its Inspire propaganda magazine, al-Adnani supplemented his statement with the prescription of simple albeit crude “kill methods”: “Smash his head with a rock, or slaughter him with a knife, or run him over with your car, or throw him down from a high place, or choke him, or poison him.”

While propaganda, taken at face value, is often factually inaccurate or misleading, the proliferation of ISIL-inspired attacks has led to the repurposing of ISIL’s statements as simplified training manuals for the remotely radicalized. Sympathizers from countries across the globe continue to answer al-Adnani’s directive: Ayoub El Khazzani wielded an AKM assault rifle and box cutters aboard a Thalys train en route to Paris; a fifteen-year-old girl stabbed a police officer in Hannover station in Germany; Mohamed Lahouaiej-Bouhlel plowed a truck into a crowd of Bastille Day revelers in Nice; and Anis Amri demolished the Berlin Christmas market with a stolen truck.

While not every call to action made by ISIL will elicit a response, the correlation between ISIL’s identification of specific strategies and sympathizers’ reciprocal selection of attack methods speaks to the importance of reading the “signals” of terrorist propaganda. Looking to the future, the use of drones to direct suicide bombers, cyber hacks to undermine national infrastructure and high-profile kidnappings are all tactics that ISIL has entertained using, and that U.S. counterterrorism analysts should take seriously.

The dual challenge of identifying which soft targets to harden before terrorists strike, while concurrently designing a counter-narrative that dissuades prospective militants from joining Al Qaeda or ISIL before they commit attacks, illustrates the gravity of the imagination gap; the inability to imagine the crude ways in which unconventional weapons—such as planes and trucks—could be used to terrorize targets of everyday life—including skyscrapers, restaurants and nightclubs—reflects the unsustainability of the current defensive strategy. Unless U.S. counterterrorism officials study the evolution of the terrorism trajectory and use it to imaginatively forecast what transnational terrorists will weaponize next, they risk misdirecting critical resources as the threat shifts yet again.

If President Trump is serious about combating terrorism, he will need to encourage his team to read the “signals” of propaganda and trace the terrorist threat into the future by imagining the unimaginable. Only then can the United States move its counterterrorism strategy onto the offensive line.

Jacqueline R. Sutherland is the Terrorism & Asymmetric Warfare Fellow at Young Professionals in Foreign Policy (YPFP). She is also a security-focused Senior Analyst at The Chertoff Group and serves as a non-resident Counterterrorism Fellow at the London-based Asia-Pacific Foundation, through which she is regularly interviewed as a counterterrorism expert on international news shows. She holds a Master's in International History from the London School of Economics.