The Next Crisis You're Not Watching: Don't Ignore the South Caucasus 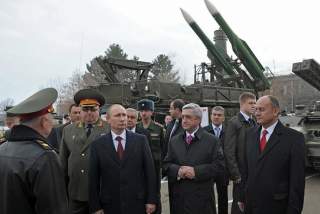 Paris and Syria share the headlines today, but worrying developments in the South Caucasus raise alarm bells about weak governance and the risk of war. The countries of the region—Armenia, Azerbaijan, and Georgia—have chosen diverging domestic and foreign policy paths, but all face intense pressures from Russia to expand its influence. The West should act now to diminish the likelihood of a new war and press for greater political pluralism.

The most serious concerns are internal developments in Azerbaijan and prospects for a resumption of hostilities between Azerbaijan and Armenia over Nagorno-Karabakh, an area populated and militarily controlled by Armenians but located within Azerbaijan.

For the past eighteen months, Azerbaijan has consistently repressed press and media freedom and basic human rights. Rigged parliamentary elections on November 1 produced an overwhelming vote for the ruling party and its satellites with the opposition shut out. There was no credible monitoring, as the OSCE and European Parliament cancelled missions when the government did not allow them to operate according to international standards.

Key opposition voices remain imprisoned or exiled with the only ray of light being the recent transfer to house arrest from prison of the prominent human rights activist, Arif Yunus, for health reasons. International calls for the release of his wife Leyla Yunis, Ildar Mammadov and other political prisoners have fallen on deaf ears. Anti-Western and pro-Russian rhetoric is increasing from official sources, focusing on alleged efforts by the West, especially the United States, to repeat the Maidan popular uprising of Ukraine in Baku.

With oil and gas prices falling, Azerbaijan is experiencing hits to its budget, the banking system is in crisis due to questionable loans to regime loyalists, and speculation about another currency devaluation is rife. The recent removal of the powerful Minister of Security and eighty of his colleagues, and the Minister of Communications with overtones of massive corruption are signs of division within the circle of the autocratic President Aliyev and his lack of control over key security ministries.

Concurrently, the situation on the ceasefire line with Armenia over Nagorno-Karabakh threatens to deteriorate, as the number of sniping deaths and attacks with sophisticated weaponry is mounting. Bilateral and international peace efforts remain frozen as the respective leaders make no effort to prepare their publics for compromise and Moscow enables both sides with arms deliveries. A key risk is a major escalation resulting from a series of smaller clashes, a scenario which could eventuate as Aliyev’s popularity falls and he resorts to a military strike to unify the nation. Aliyev, of course, must weigh Armenia’s defense pact with Russia and the probability of a military defeat. Yet he is using paranoia, populism, and unpredictable, bold strikes to build public support. He is also undermining the OSCE Minsk Group process—the only hope for a peaceful resolution of the Nagorno-Karabakh conflict.

The Armenian political situation is relatively quiet. After buckling under Russian pressure and joining the Eurasian Economic Union (EEU) in lieu of an Association Agreement with the EU, Armenia and the EU are now to begin negotiations to salvage part of the old Association Agreement and reconcile it with Armenian EEU membership. This effort by Yerevan to maintain some balance in its foreign policy and gain more access in a rich market may yet run into difficulties with Russia. Armenia continues its hostile narrative vis-à-vis Azerbaijan over Nagorno-Karabakh, even as the continuing state of war with Azerbaijan saps its economy, reinforces its semi-authoritarian political system and provides Russia with leverage regarding the Nagorno-Karabakh conflict.

Georgia’s reputation as a leader in democratic growth and judicial reform in the former Soviet Union is now coming into question. The immediate issue is a battle over the ownership and control of Rustavi 2, an independent television broadcaster and leading media voice critical of the ruling Georgia Dream government.

The legal maneuvering has been anything but judicially sound and transparent. A lower court ruling in the middle of the night contradicted the Constitutional Court and turned the station back to a previous owner, who supports the government. The latter argues that he had been forced by the prior government of President Mikheil Saakashvili to sell his asset at a giveaway price. The latest turn is that the lower court judge has altered his original ruling to now leave control of the station to the present owners until their appeal process is completed.

Many in the West and in Georgia see this evident judicial abuse as a direct attack on freedom of the press, at a time when the government’s popularity is falling due to Georgia’s weak economic performance and alleged indecisive leadership. To thicken the plot, intercepted tapes of alleged phone conversations between Saakashvili, now governor of the Odessa region in Ukraine, and several of his supporters in Georgia, record his calling on them to use the Rustavi 2 issue to develop a “revolutionary” scenario to challenge the current government. Parliamentary elections will be held in October 2016, and right now, undecided voters are in the majority.

The development and export to world markets of Caspian energy remains a Western strategic interest. But with the emergence of alternative global sources of energy, the drop in oil and gas prices, and the reduced need for logistical support to NATO forces in Afghanistan the South Caucasus may become less important in these dimensions.

The pivotal location between Russia, Turkey, Iran and the Middle East, however, requires that the West pay more policy level attention to the South Caucasus. Peacemaking with Armenia and Azerbaijan has long been frustrating for the West and Russia, but it remains worthwhile to reduce the risk that Nagorno-Karabakh will erupt into a hot war. It could even ensnare Turkey, Russia and Iran in wider tensions. This requires the parties to decide that face-to-face negotiations under Minsk Group mediation are the way forward. Second, the West should pursue tough love with Azerbaijan to counter its authoritarian spiral and free the remaining political prisoners. Finally, the West ought to conduct a more direct dialog with the Georgian government and opposition about democratic principles and freedom of the press, and how they may affect its Euro-Atlantic aspirations.

Denis Corboy is a visiting senior research fellow at King’s College London and was European Union ambassador to Armenia and Georgia.

Richard Kauzlarich is Co-Director of the Center for Energy Science and Policy at George Mason University and was U.S. ambassador to Azerbaijan and Bosnia and Herzegovina.

Kenneth Yalowitz is the Director of the Conflict Resolution Program at Georgetown University, a Global Fellow of the Woodrow Wilson Center and was U.S. Ambassador to Belarus and Georgia.