The Next Dilemma for U.S.-China Ties: A Communications Breakdown? 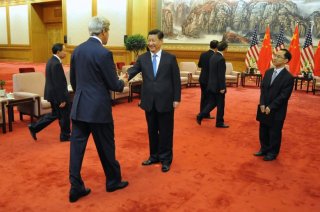 Confronted with some of the most complex geopolitical challenges of the twenty-first century, the Asia-Pacific region has entered a state of heightening tensions, threatening to undermine this key driver for the global economy and vital strategic region for the United States. A central element of how the United States (and the international community) takes steps to manage instability in the Asia-Pacific region requires a comprehensive set of efforts to not only enhance cooperation with U.S. allies and partners and invest in multilateral institutions, but to adapt mechanisms and advance creative diplomatic means to engage the new Chinese leadership. Against this backdrop, U.S. and Chinese officials convened last week in Beijing for the sixth round of the Strategic and Economic Dialogue (S&ED), among the most comprehensive bilateral engagements in U.S. foreign policy.

Yet despite measured progress through the dialogue, particularly on steps to reduce carbon emissions, it is increasingly clear that the United States is facing a profoundly different China from President Obama’s first term. President Xi Jinping has rapidly consolidated power internally and advanced a more assertive regional policy, raising serious concerns about the ability of the United States to channel messages to China’s top decision makers. As a result, Washington will have to expand and adapt the way it does business with Beijing.

President Xi, who only assumed office in March 2013, has embarked on a remarkable consolidation of power early in his tenure. In order to press his priorities through China’s byzantine bureaucratic system, he has created new institutional structures to cut through the red tape. On security issues, he instituted China’s first ever national-security council with him as its head to press a “unified” approach to both domestic and external security challenges. In order to drive his substantial economic agenda through China’s sclerotic system, Xi launched a leading group to act as an overall coordinating body to manage the entire reform process from policy formulation to design and implementation, again choosing to chair the body himself. Additionally, as tensions continue to rise over cyberespionage, Xi has created and taken charge of a new body overseeing cybersecurity, pledging to turn China into a “cyber power.”

These bureaucratic steps notwithstanding, Xi’s greatest power play has been his wide-ranging anticorruption campaign, which netted its largest target last month in General Xu Caihou, who previously served as the military’s second-in-command and critically had direct oversight of personnel appointments in China’s People’s Liberation Army. His purge from the Communist Party and deliverance to the prosecutors’ office on charges of selling military promotions was a clear signal that President Xi would crack down on corruption even in near-sacrosanct institutions, including the military. Behind the scenes, it also demonstrates Xi’s hands-on approach to the military, underscoring his willingness to dismantle former President Jiang Zemin’s network within the PLA (unlike his predecessor Hu who never commanded a strong relationship with the military).

The move against Xu is just the latest in a series of high-level anticorruption investigations under Xi’s watch. Major Chinese state-owned enterprises and their government regulators are in a near state of paralysis, looking over their shoulders to see if they may be the next target of the wide-ranging probes. Taken together, Xi has made clear that he intends to press his will through the government and there are real costs to those standing in the way.

In 2009, the S&ED was launched in part as a U.S. attempt to break down bureaucratic stovepipes in the Chinese system. The assumption was that if the United States brought together high-level officials from across its interagency to meet with their Chinese counterparts, the ensuing constellation of Chinese officials would not only speak with the Americans, but also each other – in time building habits of greater interagency transparency essential to enhancing U.S.-China cooperation.

But in the Xi era, the greatest divide is no longer between China’s disparate ministries, but instead the growing distance between the president and China’s bureaucracy. The previous Chinese co-chairs of the S&ED, Vice Premier Wang Qishan and State Councilor Dai Bingguo, had significant influence within the Chinese government, and with President Hu in particular, which allowed them to serve as effective counterparts to Secretary of State Hillary Clinton and Secretary of the Treasury Tim Geithner. Now there is an emerging sense that President Xi keeps his own counsel and relies on only small number of advisors. This presents significant difficulties for U.S. officials, particularly as discussions in Washington increasingly turn to cost-imposition strategies and other means to dissuade Chinese assertive behavior. The absence of reliable channels to Beijing can hinder the effectiveness of U.S. policy and multiplies the potential for miscalculation.

How should the United States respond?

To adapt to this new reality, the Administration should pursue multiple avenues both to better understand Chinese decision-making and to reach the most relevant interlocutors. For starters, the Administration can creatively employ senior White House officials to engage Xi’s inner circle – passing messages between leaders and conveying strategic perspectives and intentions. Along these lines, this year’s S&ED featured an important evolution: the subtle inclusion of White House Counsellor Jon Podesta. As the embodiment of the Obama Administration’s decision to use executive actions to advance its agenda in the second term, particularly on climate change, Podesta was perhaps uniquely suited to travel to China as a low-profile White House addition to the State and Treasury-led delegations.

At last year’s summit in Sunnylands, California, Presidents Obama and Xi began by outlining their respective domestic priorities and visions, recognizing that issues at home often command the majority of leaders’ attention and substantially impact foreign policy. U.S. officials like Podesta could be tasked with picking up this thread in U.S.-China dialogue with officials close to President Xi’s thinking, such as Wang Huning, Xi’s longtime consigliore who heads the Communist Party’s Policy Research Office, and Liu He, Deputy Director of China’s powerful National Development and Reform Commission, charged with crafted China’s updated economic blue print. Like Podesta, these Chinese officials’ influence goes well beyond their bureaucratic designation, making them ideal for better understanding Xi’s vision for China as well as raising serious concerns on issues such as cyber-espionage and economic nationalistic policies to China’s power projection in the East and South China Seas.

This diversification of White House contact with the Chinese government would build on the Obama Administration’s pivot to Asia as a natural extension of the U.S. government’s strategic framework on China policy. Last November, National Security Advisor Susan Rice laid out her vision for America’s future in Asia in a major foreign policy address at Georgetown University. In the context of China, Rice emphasized the importance of “managing inevitable competition while forging deeper cooperation on issues where [our] interests converge.” A Rice visit to China in the coming months could help to set expectations on the steps Beijing must take to operationalize its desire for a new model of major power relations and set the metrics of success for Obama’s November trip to Beijing, where he will meet with President Xi after the APEC summit.

As China stands up its new coordinating bodies on national security, economic reforms, and cyber security, it will be important for NSC senior officials like Ambassador Rice to meet their members and develop channels of communications. China has resisted this approach, arguing they are inward-looking bodies and, instead, the foreign ministry handles diplomacy. However, given the extent to which Xi seems intent to empower these bodies to develop and implement security and economic policies, the U.S. government should employ pressure to break this Chinese stonewalling, tying access to members of these bodies as prerequisites for U.S.-China engagements.

Finally, it will be essential to continue to identify the emerging set of top advisors who have the greatest access and influence on Xi’s decision-making. The U.S. Embassy in Beijing and intelligence agencies should be tasked with developing a better understanding of these key figures as, for the sake of U.S. policy, it will at times be as important to understand who is making decisions as what decisions are being made.

While dialogue and enhanced contacts between senior officials will not alone resolve major challenges in the U.S.-China bilateral relationship, more nuanced relationships and personal contacts are essential to working effectively with the new China. As President Xi breaks the mold of China’s bureaucracy, Washington must also expand its approach to Beijing.

Brian Andrews is an Engagement Manager at The Asia Group. From 2008-2013, he served at the State Department, Defense Department, and White House on Asian policy.