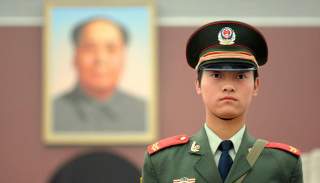 Although China could initially only observe the advent of the Information-Technology Revolution in Military Affairs, the People’s Liberation Army might presently have a unique opportunity to take advantage of the military applications of artificial intelligence to transform warfare. When the United States first demonstrated its superiority in network-centric warfare during the first Gulf War, the PLA was forced to confront the full extent of its relative backwardness in information technology. Consequently, the PLA embarked upon an ambitious agenda of “informatization” (信息化). To date, the PLA has advanced considerably in its capability to utilize information to enhance its combat capabilities, from long-range precision strike to operations in space and cyberspace. Currently, PLA thinkers anticipate the advent of an “intelligentization Revolution in Military Affairs” that will result in a transformation from informatized ways of warfare to future “intelligentized” (智能化) warfare. For the PLA, this emerging trend heightens the imperative of keeping pace with the U.S. military’s progress in artificial intelligence, after its failure to do so in information technology. Concurrently, the PLA seeks to capitalize upon the disruptive potential of artificial intelligence to leapfrog the United States through technological and conceptual innovation.

For the PLA, intelligentization is the culmination of decades of advances in informatization. Since the 1990s, the PLA has been transformed from a force that had not even completed the process of mechanization to a military power ever more confident in its capability to “fight and win” informatized wars. Despite continued challenges, the PLA appears to be on track to establish the “system of systems” operations (体系作战) capability integral to integrated joint operations. The recent restructuring of the PLA’s Informatization Department further reflects the progression and evolution of its approach. These advances in informatization have established the foundation for the PLA’s transition towards intelligentization. According to Maj. Gen. Wang Kebin (王克斌), director of the former General Staff Department Informatization Department, China’s “information revolution” has been progressing through three stages: first “digitalization” (数字化), then “networkization” (网络化) and now “intelligentization” (智能化). The PLA has succeeded in the introduction of information technology into platforms and systems; progressed towards integration, especially of its C4ISR capabilities; and seeks to advance towards deeper fusion of systems and sensors across all services, theater commands and domains of warfare. This final stage could be enabled by advances in multiple emerging technologies, including big data, cloud computing, mobile networks, the Internet of Things and artificial intelligence. In particular, the complexity of warfare under conditions of intelligentization will necessitate a greater degree of reliance upon artificial intelligence. Looking forward, artificial intelligence is expected to replace information technology, which served as the initial foundation for its emergence, as the dominant technology for military development.

Although the PLA has traditionally sought to learn lessons from foreign conflicts, its current thinking on the implications of artificial intelligence has been informed not by a war but by a game. AlphaGo’s defeat of Lee Sedol in the ancient Chinese game of Go has seemingly captured the PLA’s imagination at the highest levels. From the perspective of influential PLA strategists, this “great war of man and machine” (人机大战) decisively demonstrated the immense potential of artificial intelligence to take on an integral role in command and control and also decisionmaking in future warfare. Indeed, the success of AlphaGo is considered a turning point that demonstrated the potential of artificial intelligence to engage in complex analyses and strategizing comparable to that required to wage war—not only equaling human cognitive capabilities but even contributing a distinctive advantage that may surpass the human mind. In fact, AlphaGo has even been able to invent its own, novel techniques that human players of this ancient game had never devised. This capacity to formulate unique, even superior strategies implies that the application of artificial intelligence to military decisionmaking could also reveal unimaginable ways of waging war. At the highest levels, the Central Military Commission Joint Staff Department has called for the PLA to progress towards intelligentized command and decisionmaking in its construction of a joint operations command system.

Although the PLA’s initial thinking on artificial intelligence in warfare has been influenced by its close study of U.S. defense innovation initiatives, including the third offset strategy, its approach to intelligentization will evolve over the course of its engagement in the stages of speculation and subsequent experimentation required for military innovation. In their writings to date, leading PLA academics, not unlike the U.S. military, project that the impactful military applications of artificial intelligence will include: intelligentized command and control, as well as support to decisionmaking; intelligent unmanned military platforms; and the expansion of human stamina, skills and intellect through artificial intelligence. The initial conferences and workshops on the topic have convened influential academics, including from the PLA’s Academy of Military Science, National Defense University and National University of Defense Technology, along with leading artificial intelligence experts, such as Maj. Gen. Li Deyi (李德毅), from the Central Military Commission Equipment Development Department’s 61st Research Institute. Among them, Hu Xiaofeng (胡晓峰), a PLA wargaming and simulation expert, has engaged in extensive study of DARPA’s Deep Green program, which sought to create and evaluate potential options for commanders. There are indications that PLA researchers have been experimenting with the development of a comparable system.

Ultimately, the PLA’s employment of artificial intelligence on the battlefield will likely diverge from the U.S. approach, given its own distinctive strategic culture and organizational dynamics. Speculatively, the PLA’s traditional approach that “technology determines tactics” could contribute to an inclination to rely upon artificial intelligence, perhaps to a greater degree than the United States. Certain PLA thinkers anticipate that the dynamics of future warfare will demand that artificial intelligence take on an increasingly integral function at the strategic and operational levels of command. In particular, the demands for cognitive speed in warfare are expected to result in progression towards a battlefield “singularity,” a point at which the rapidity of reactions required exceeds human capabilities. At this point, it is too early to anticipate the future trajectory of the PLA’s employment of artificial intelligence. However, it is notable that the intense concerns over keeping a human “in the loop” that tend to be pervasive in U.S. debates on the topic appear to be less prevalent in the PLA’s writings. Perhaps, the PLA could approach the issue of “meaningful human control” differently than the United States. Looking forward, the PLA’s thinking on and progression in multiple dimensions of intelligentization will be a critical determinant of its future military capabilities.

Elsa Kania is an analyst at the Long Term Strategy Group. She recently testified before the U.S.-China Economic and Security Review Commission on China’s unmanned systems and military applications of artificial intelligence.