The North Korea Crisis: Could a Freeze-For-Freeze Deal Avert a Showdown? 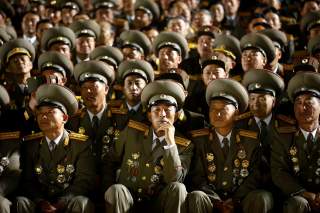 As President Trump and North Korean dictator Kim Jong-un trade public insults the world now faces the very real possibility that a nuclear skirmish could break out on the Korean Peninsula. The two sides need to find a way to step back from the brink of war.

The problem, however, is that Washington and Pyongyang possess completely different—and apparently irreconcilable—positions. The official position of the U.S. government is that North Korea must end its nuclear program and give up all of its nuclear weapons, while North Korea demands that the world accept it as a nuclear power.

At this point, the Trump administration faces a series of very unpalatable policy options on North Korea. While the president and his staff publicly maintain that a military strike to destroy North Korea’s nuclear weapons program is a viable option, the reality is that it is not. Tens of thousands—if not millions—of people would die in a full-scale war, and with Pyongyang’s weapons and facilities spread throughout its mountainous territory, it is far from assured that an American “shock and awe” first strike would fully eliminate North Korea’s nuclear infrastructure anyway.

By the same token, however, the policy pursued by Presidents Bush, Obama and now Trump —sanctioning North Korea and pressing China to cut off Beijing’s support for Kim’s regime—has never really worked either. China, in particular, fears that if the Kim regime were to suddenly collapse, then it would bring a stream of North Korean refugees across its border, while a united Korea allied with the United States could bring American troops right up to China’s border with North Korea on the Yalu River, which was the original reason for why China intervened in the Korean War.

Russian president Vladimir Putin may have a good idea for how to proceed. Putin contends that North Korea would rather “eat grass” then abandon its nuclear program and that the North Koreans “see nuclear weapons and weapons of mass destruction as the only way for them to protect themselves” from regime change. Surprisingly, Putin’s views align with what leading American experts on North Korea and nuclear nonproliferation believe.

To put an end to the gathering momentum for war, Putin proposes that the United States and North Korea agree on a “freeze for freeze”—North Korea would stop testing it missiles, in exchange for an end to American and South Korean military exercises. Moreover, both of the freezes would be easy to verify by conventional means.

While this “freeze for freeze” isn’t a permanent solution, it could lead to one. The yearly American-South Korean military exercises cause great consternation in North Korea, which sees them as possible preparations for an invasion of the North. This leads Pyongyang to respond with its own threats to wage war.

It is certainly in America’s national interests to consider offering the Kim regime a “freeze for freeze.” The American intelligence community believes that North Korea could possess the ability to launch a nuclear attack on the U.S. mainland some time in 2018, so if any hope remains of freezing it short of the point where North Korea can strike the U.S. with a nuclear weapon, then it is in America’s interest to grasp it.

To be clear, Putin’s motives for making these suggestions are all about promoting Russia’s own interests. Moscow’s position in the crisis stems from a desire to boost Russia’s international prestige at the expense of America’s, as well as remind its public that Putin is a strong leader who won’t give in to Western pressure. Indeed, just as the Trump administration’s strategy of pushing China—North Korea’s leading patron—to cut economic ties with Pyongyang appears to be bearing fruit, Moscow has stepped up its own economic support for Pyongyang, thereby throwing the Kim regime a vital economic lifeline just as sanctions start to bite.

Yes, Putin’s proposal is self-serving, but that is no reason to ignore the fact that it is also an advantageous option for the United States, especially if it helps Washington and Pyongyang step back from the brink of nuclear war.

Josh Cohen is a former USAID project officer involved in managing economic reform projects in the former Soviet Union. He contributes to a number of media outlets including The National Interest, Reuters, Washington Post and others.

Nicolai Petro is Silvia-Chandley Professor of Peace and Nonviolence at the University of Rhode Island.