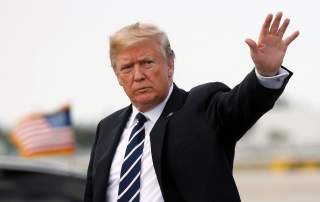 The Kennedys are back, in all their personal and political glamor. CNN’s buildup to this month’s mini-series evokes the Hollywood-style aura of America’s first entertainment presidency. The mythology that was created before our eyes then has remained part of the tragic Camelot mystique ever since.

Syndicated cartoonist Mike Luckovich recently made a small contribution to the Kennedy zeitgeist when he lampooned President Donald Trump’s handling of foreign policy. He put imagined Trump quotations in the mouths of three former presidents. His drawings clearly portrayed the real historical figures, but they were whimsically identified as Franklin D. Trump, John F. Trump and George W. Trump.

He depicts Roosevelt after Pearl Harbor and Bush after September 11 as naïvely friendly to Hirohito and Bin Laden, respectively. Obviously sardonic, it is meant to show those presidents’ real-world command effectiveness in the face of foreign attack and ongoing threat—presumably by contrast to the present commander-in-chief.

But, remarkably, the quote Luckovich attributes to JFK as Trump—“Russian nukes in Cuba? Fake news!”—is substantively identical to the position the real Kennedy took before the Cuban Missile Crisis.

In August, 1962, New York Sen. Kenneth Keating announced that the Soviet Union was sending arms to Cuba. Kennedy publicly dismissed the claims as groundless rumors even though he had seen intelligence reports confirming some of the senator’s charges. Keating accused the administration of not telling the American people the truth about what was happening in Cuba and allowing the danger to grow.

Over the next few months, in the face of repeated administration denials, Keating’s warnings became more ominous, and in early October he made the stunning claim that offensive Soviet missile bases had been built on the island. The Central Intelligence Agency now confirmed that Keating had been right all along, and the Cuban Missile Crisis was dramatically upon us.

The tense U.S.-Soviet nuclear confrontation had the world holding its collective breath until Kennedy and Soviet Premier Nikita Khrushchev reached a deal trading Soviet missiles in Cuba for American missiles in Turkey that Moscow had long wanted removed—and a U.S. security guarantee for the Cuban Communist regime of Fidel Castro.

In his book, The Kennedy Legacy, Theodore Sorenson repeatedly describes the Soviet emplacement of missiles in Cuba as “sudden” and makes no mention of Keating’s increasingly urgent warnings over a period of months.

Robert Kennedy’s own memoir of the events, Thirteen Days, also says nothing of Keating and the building crisis. Instead, he dates its beginning as October 16. That was when the president told him that after a U-2 photographic mission over Cuba “the Intelligence Community had become convinced that Russia was placing missiles and atomic weapons in Cuba.”

Other writers and scholars, however, have observed that the record had vindicated Keating’s persistent warnings from the start and that JFK had knowingly deceived the public about the festering peril.

(Two years later, and a year after the president’s assassination, RFK changed his official residence from Massachusetts to New York, ran for the Senate against Keating, and defeated him.)

The Luckovich cartoon is intended to show that President Trump is not the cool, competent JFK of the Cuban Missile Crisis. But the record shows that, until October 16, 1962, neither was the real Kennedy.

The larger irony the cartoon inadvertently highlights is that the Trump administration confronts the same dilemma Kennedy’s team did then: how to deal with an existential threat to the United States posed by nuclear missiles in the hands of a menacing foreign power.

JFK decided not to use preemptive or preventive force but to “quarantine” (i.e., blockade) the island to prevent expansion of the threat and to compel the removal of missiles already there. In addition to withdrawing NATO missiles from Turkey, he also acceded to Soviet demands that Washington would not seek regime change in Cuba. The reckless Russian missile deployment thus managed to produce strategic dividends for both Moscow and Havana.

By analogy, the United States decades ago withdrew tactical nuclear weapons from South Korea to facilitate a nuclear-free Korean Peninsula, but China and Russia went on enabling North Korea to develop its own nuclear and missile arsenal. Now, the three Communist powers demand further U.S. concessions, while Beijing and Moscow continue to support and protect Pyongyang.

Kennedy faced a dangerous situation that emerged entirely on his own watch. Trump, as he frequently but justifiably reminds us, now must grapple with a crisis that developed and deepened under prior administrations of both parties.

United Nations sanctions against North Korea have authorized the interdiction of ships carrying contraband materials into and out of North Korea. Whether this will expand to the complete blockade Kennedy ordered for Cuba (and Henry Kissinger once suggested the United States undertake with China against North Korea) remains to be seen—as does the question of whether Beijing and Moscow will offer cooperation or challenge. Meanwhile, if negotiations, sanctions and interdiction do not work, the force option for “John F. Trump” remains very much on the table.

Joseph Bosco is a senior associate at the Center for Strategic and International Studies. He served as China country desk officer in the Office of the Secretary of Defense and taught a graduate seminar on U.S.-China-Taiwan relations at Georgetown’s School of Foreign Service.