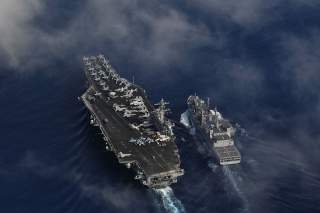 If North Korea truly desires state of the art nuclear weapons and missiles—something that can deliver an atomic payload to say Los Angeles—then we are indeed in for some tense time ahead.

The only way Kim Jong-un—the portly pariah of Pyongyang—can truly develop a medium-range missile that can hit even Hawaii or Alaska is through a rigorous testing program. Even in failure, the Kim regime gains vital technical data that creates pathways to future success. The same goes for making nuclear weapons small enough to place atop such a missile. While Washington, Moscow or Beijing might have mastered the Jedi arts of nuclear weapons decades ago, North Korea is still in padawan mode—but making slow and steady progress.

And that is where the danger lies. Kim’s testing schedule will only escalate if he really wants to deter America and its allies through atomic means. If Kim is serious about building missiles that can hit the U.S. homeland he will need to thoroughly test them—over and over again. His first few intercontinental ballistic missiles tests (ICBM)—which the international community will surely go gaga over in the coming months—will likely end in spectacular failure. But as time goes on, as Pyongyang learns from past mistakes, it will slowly put together the guidance systems, the tracking capacity, the targeting technology and heatshield materials needed to hit the target. But the cost for such a weapon comes at a steep price. With every launch tensions will rise. As each missile goes further and further afield, more demands for action—military action, that is—will be made.

From there it could get worse. What happens if a North Korean missile test goes wrong, and say crashes on South Korean or Japanese territory? What happens if innocent civilians are killed? As I explained recently, it could set Asia on a path to war:

Let's say in the not-too-distant future a North Korean missile veered off course and crash landed in the outskirts of Seoul, killing several hundred people in a tragic accident. South Korea would be hard pressed not to respond. In this fictional tale, Seoul would strike back with a missile of its own, destroying the North Korean launcher and crew responsible.

So where do we go from here? As I have explained on a few occasions now, we do have options short of a unilateral strike—not an option at all if you consider what happens if you can’t guarantee taking out every single one of Kim’s nuclear weapons.

First, President Trump and his team must work to contain North Korea's nuclear and missile programs so they are unable to gain any outside assistance. Tough secondary sanctions would be placed on any nation, financial entity, company, or individual who dares help the regime develop such weapons. The Trump administration must make it clear: if you seek to profit from helping one of the world's most rogue regimes build nuclear weapons or long-range missiles you will pay the most severe of prices—slapped with the label of international pariah. While sanctions won’t solve the problem entirely, or erase the nuclear knowledge from the minds of North Korea’s scientists, such measures could greatly slow the rate of technological development and raise the costs of such work for Pyongyang.

Second, the Trump administration must use sophisticated cyber tools, just as the Obama administration did in the case of Iran's nuclear program, to trip up North Korea’s nuclear and missile efforts at every turn. While reports indicate such efforts seem underway, the administration should make every effort to ramp these programs up as much as possible. Again, the goal would be to slow the progress of these programs, and increase their cost.

Lastly, and as repulsive as it sounds, the time has come where talks with North Korea would be most wise—something the administration now seems open to after remarks to the contrary. To be fair, history shows such an option has a slim chance of success—Pyongyang is not exactly the most reliable of negotiating partners and has rarely kept its word. But considering the risks, we owe it to our allies and the American people—the potential new targets of North Korea’s nuclear tipped missiles—to act on Winston Churchill’s axiom: to jaw-jaw is always better than to war-war.