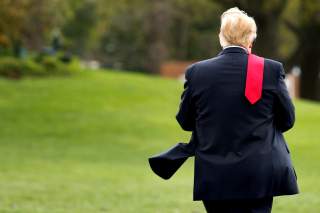 Don’t be mistaken. American President Trump’s cancellation of the June 12 summit with North Korean leader Kim Jong-un does not mean that negotiations about North Korea’s nuclear weapons and related questions on the Korean Peninsula will not take place. On the contrary. It is the start of these negotiations. Behind the veil both sides carefully keep the option of a summit and future meetings open.

Over the years North Korea has displayed a masterly skill to negotiate about to negotiate. In fact, North Korea is adept at moving the chess pieces in its favor before coming to the table. Trump is now emulating that tactic. By cancelling that specific meeting in his own brusque way- but also by not doing away with the idea of meeting- he ensured he would avoid being seen by North Korea as being too willing and too eager to clinch a deal. Without cancelling the summit, he would have been read as easy to push around. North Korea would have felt that it was already one up before the meeting started and therefore would have increased its demands for a settlement believing the U.S. would buckle. The result would have been a dismal failure souring, and maybe even destroying, any prospect of a genuine deal along the road.

It is strange that this president, who lacks any experience with foreign policy and diplomacy, is the first and only U.S. president to read North Korea correctly. It is about playing hard ball, refusing to make concessions before negotiations, and most importantly playing by your own rules. By doing this, you force the other party to dance to your tune and disregard normal and conventional diplomacy. This is what North Korean leaders have been doing for decades to America and the world- over and over again- and successfully too. It appears that Trump’s game plan apparently is tit for tat.

These two leaders, Trump and Kim, have one thing in common. They both reject the established set of rules for international relations. They are monomaniacs in the sense that they do not care about the global system, how they are perceived by others and interests of other countries. They do not see a global system as a plus sum game where everybody gets a slice of the cake. It is only about the interests of their own country.

North Korea and Kim Jong-un can pursue such a policy as has been the case for decades. It may be the only way to prevent the existing North Korean system (Juche) from collapsing.

The U.S. and President Trump, however, cannot. America is a global power and the leader, at least until recently, of an elaborate network of alliances and friendships build over seventy years. That network of military commitments is underpinned by economics, trade, investments, technological cooperation, and people to people connections that delivered a reasonably stable and secure world with all nations feeling better off compared to any thinkable alternatives.

The plinth was not hard power – maybe not even soft power in the form of economics and trade. Rather, the basis of this system was the certainty that the U.S., as leader, played by established and well-known rules primarily through a network of international institutions, but also when acting bilaterally. The rest of the world followed identical rules because it was in their interests. Over the last decade or two dissatisfaction have surfaced from several countries (Russia and China) who let it be understood that the rules were too lopsided and favored the U.S. too much. But despite this, only a few countries, most notably North Korea, chose to break those rules.

That America, the founding father (together with Britain) of this international system, now seems on its way to break some of those rules is a paradox that future historians might ponder on.

For America’s allies the Trump policy is a watershed moment in which the global alpha male turns its back on its allies and friends. The result is unpredictability and uncertainty in global relations and, for U.S. allies, a feeling that America can no longer be relied on—at least not as used to be the case.

The Trump style, vocabulary, and selfish way adds insult to injury. Japan has steadily supported the U.S. as a strong ally since the outbreak of the Korean War in 1950. Apart from South Korea, no country has more at stake from negotiations of nuclear weapons on the Korean peninsula than Japan. Yet, as far as we know, Japan has been totally sidelined, maybe not even informed, by the Trump administration when the decision to seek a summit was made. In fact, Japan was probably not informed of Trump’s decision to cancel either. Furthermore, two days before the cancellation South Korean President Moon Jae-in met President Trump in the White House with smiles all over the faces in view of him being instrumental as a go between. Barely had he landed in Seoul before he learned of Trump’s decision. A press photo shows him presiding a meeting at the Blue House with grim expressions on the faces of all seven people around the table, which clearly shows not only surprise and disappointment, but a sense of having been misled and taken advantage of.

If the North Korea situation was the only example of this disregard for America’s allies and the international system, such a conclusion might be seen as superficial and too hasty. But it is not. It comes after withdrawal from Trans Pacific Partnership, withdrawal from the Paris agreement on climate change, demands for renegotiation of the North American Free Trade Agreement, withdrawal from the Iranian nuclear deal, the decision to discontinue the funding of international institutions (or threatening to do so), announcing that the U.S. would not necessarily comply with international rulings (e.g by the World trade Organization), stirring up anxiety and anger by loose talk of trade wars, and a lukewarm attitude vis-à-vis the North Atlantic Treaty Organization combined with a lack of understanding about the European Union. These threads weaved into a tapestry which conveys a picture of an American foreign and security policy breaking with established international system and rules.

For America’s allies, the challenge is whether they can now stand on their own feet.

Image: U.S. President Donald Trump walks on South Lawn of the White House in Washington, U.S., before his departure to Michigan, April 28, 2018. REUTERS/Yuri Gripas TPX IMAGES OF THE DAY