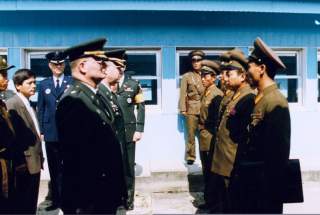 Over the past few months, North Korea has become increasingly assertive on both the international and domestic stage. The Hermit Kingdom conducted its fourth nuclear weapons test in January, successful launched a satellite that also functioned as a ballistic missile test in February, and convened the seventh Congress of its ruling Korean Workers’ Party (KWP)—the first such gathering since 1980—earlier this month.

To analyze these important developments, the Center for the National Interest on May 24 held a discussion with Georgetown University professor and former George W. Bush administration National Security Council official Victor Cha and Lt. General Wallace “Chip” Gregson, Jr., former Assistant Secretary of Defense for Asian and Pacific Security Affairs (2009-2011) and Senior Director of the Center’s China and the Pacific Program. Jacob Heilbrunn, editor of the National Interest, moderated.

Throughout the focus was on the limited options that the U.S. and its allies possess in dealing with North Korea—and the perils that confront them. Cha addressed the dangers that North Korea’s nuclear ambitions represent in 2016 as well as over the next decade. In both cases, he holds a pessimistic view. Although a lull currently exists in Pyongyang’s nuclear-related activities following the Congress, Cha expects this to change by August when the United States and South Korea hold their annual joint military exercises. Moreover, given Pyongyang’s propensity for demonstrating its ability to flex its muscles around election time in the United States and South Korea, it is quite likely that it will pursue provocative behavior in November.

Aside from these near term considerations, Cha also discussed three structural factors undergirding his gloomy outlook. First, the DPRK nuclear weapons program is increasing in sophistication, and it is only a matter of time before it develops an ICBM reentry vehicle and smaller nuclear weapons capable of being placed on a warhead. Second, the North Korean regime is confronted with a “legitimacy spiral” in which the two sources of legitimacy it is pursuing—economic reform and nuclear weapons—are undermining each other.

As Pyongyang aggressively pursues nuclear weapons program, the international community levels sanctions that impair the country’s economic prospects. This, in turn, causes the regime to rely more on nuclear weapons as its primary source of legitimacy. Third, Cha argued that the United States policy community is underestimating the increasingly grave North Korean threat. The logic of the Obama administration’s “strategic patience” approach is one in which Washington does not overreact to DPRK provocations; yet, this policy is becoming outdated as Pyongyang demonstrates increasingly sophisticated and worrisome capabilities.

Cha also briefly discussed recent political and social trends inside the reclusive Stalinist state. He explained that the aim of this month’s KWP Congress was to firmly establish Kim Jung-un’s rule for the next half century. Yet, in lacking the stature of his grandfather and father, Kim Jung-un’s tenure will be measured much more by a performance metric than his predecessors. Moreover, as the youngest Kim oversees a more rigid political system and an economy characterized by the expansion of markets, a “tear” could emerge that is triggered, perhaps, by an effort to rein in the markets.

In looking to the future, Dr. Cha advanced five policy recommendations. First, China, as the current chair of the Six Party Talks, should call a Five Party Talks that excludes North Korea, which in any case has shown no recent desire to engage in dialogue. Second, sanctions should be made tighter, especially a ban on all forms of fuel exports to the DPRK. Third, President Obama’s executive order sanctioning third parties that do business with North Korean entities should be fully implemented. Fourth, China should regulate trade along the Sino-North Korean border to prevent Pyongyang from acquiring materials that aid its nuclear weapons program. Finally, the United States, South Korea, and China should jointly discuss various contingencies that may develop on the Peninsula. China in the past had been reluctant to engage in such discussions due to North Korean sensitives, but is less concerned now, Cha mentioned.

Lt. General Gregson’s remarks focused on the regional implications of North Korea’s activities as well as its impact on U.S. policy in Asia. He emphasized that North Korea has repeatedly defied conventional wisdom and U.S. intelligence estimates, and so should not be underestimated. For example, despite U.S. reassurances to Japan that Pyongyang did not possess a three-stage rocket, it surprised many with the launch of its Taepodong intermediate-range missile over the Japanese main islands in 1998. By extension, he argued that U.S. policymakers should not underestimate North Korea’s nuclear capabilities.

What to do? Ambassador J. Stapleton Roy raised the question of whether—based, as he put it, “on the well-known strategic principle that a small crisis is better than a big crisis”—the U.S. should seek to use an anti-ballistic missile capability to shoot down North Korean “tests of longer range missiles.” In Gregson’s view, “that’s a really intriguing idea and appealing at some point. We can logically get there…and that might be a much better way to demonstrate deterrence.”

But perhaps the most fundamental question was posed by Center president Dimitri K. Simes. He asked, “What would a military conflict with North Korea look like?” Unlike the Korean War of the 1950s, Gregson pointed out that a future conflict involving North Korea would not be confined to the Korean Peninsula. If such a conflict broke out, Pyongyang could decimate Seoul with its formidable conventional capabilities directly across the border, threaten nearby Japan with a nuclear strike, and send millions of refugees fleeing towards China. Such a grave scenario involving America’s key Asian allies of Japan and South Korea would necessarily force to the U.S. to intervene.

Just as Cha intimated in his remarks, Gregson highlighted the limited policy options available to restrain North Korea’s nuclear weapons program. He questioned whether China has the capacity and will to monitor the flow of goods across the border, as this would be both expensive and impractical. Moreover, if China fails to play a more decisive role through resumed Five Party Talks, the United States along with South Korea and Japan should strengthen and streamline their capabilities around the Korean Peninsula to send a clear signal that they would prevail in any contingency. Gregson also recommended that war games should be conducted at the principals’ level within the American government.

One topic of the broader discussion with the audience centered on how Tokyo and Seoul will likely respond to North Korea’s growing capabilities. Both Cha and Gregson agreed that Japan and South Korea will likely consider a preventive strike option or seek such assurances from Washington as the DPRK’s nuclear weapons capabilities menacingly advance. Cha, however, warned that a preemptive strike option, when brought to its logical conclusion, is incredibly destabilizing because certain scenarios—such as North Korea’s 2010 sinking of the South Korean frigate Cheonan—can quickly escalate to the nuclear weapons level unintentionally.

The ultimate question confronting Washington, however, is how it defines its national interests in Asia. Ambassador Roy put his finger on the problem when he noted that for an American president to declare it “intolerable” for North Korea to possess intercontinental ballistic missiles is tantamount to saying to Japan and South Korea “it’s OK for you.” The somber tenor of that remark captured the broader tenor of the discussion about America’s limited options in dealing with the threat posed by North Korea.