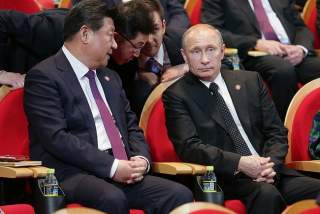 This week’s 30-year $400 billion Russia-China natural gas deal has justifiably attracted considerable attention for both its scale and its symbolism. Indeed, it is an important agreement that could have profound consequences. Nevertheless, there may also be less to the immediate arrangement than meets the eye.

On the surface, the agreement appears to be a major accomplishment for President Vladimir Putin and for Gazprom, Russia’s state-controlled natural-gas monopoly, even if the company made price and other concessions to secure the agreement with China National Petroleum Corporation, China’s largest energy producer. Mr. Putin accurately described the deal as "the biggest contract in the history of the gas sector of the former USSR" and, as this thinking goes, artfully deflected Western efforts to isolate Russia politically or economically over the annexation of Crimea, implied that a new Moscow-Beijing axis could produce a global political realignment, and secured an important new role for Gazprom in Asia’s vast energy markets.

Some appropriately question just how much Moscow had to give away—Russia needed this deal, and international observers expected it, so failure could have left the Kremlin looking somewhat deflated. The fact that the Russian president himself acknowledged that the Chinese had been “difficult, hard negotiators” and that the final pricing appears to be below what Gazprom originally sought adds weight to this. Others speculate whether it is really in Russia’s national interest to be too close to China or express skepticism that Moscow and Beijing can ever get along due to mutual suspicion and competing aims. But these are long-term questions and may not be answerable until after Russia, China, Europe, Asia, the United States and others have already experienced the consequences.

What is largely lost in this discussion is whether after years of negotiations Moscow and Beijing have actually reached an agreement that they can implement. If there are no new gas fields, pipelines, and other infrastructure, the gas won’t flow and the deal won’t end up mattering nearly as much as it seems to today.

This leads to two immediate questions. The first is whether the deal is actually all that it seems to be in press reports. As Eurasia energy expert Julia Nanay of the global-market intelligence firm IHS notes, Russia and China have released “few details about this complex series of agreements and it is not fully clear what has been settled and what remains to negotiate in inter-governmental agreements.” Taking into account the years-long history behind the deal and many false starts, this is not a trivial point.

The second is how Russia and Gazprom will live up to their end of the bargain. According to press accounts, Russia has agreed to invest some $55 billion in gas exploration and development, pipeline construction, and other necessary infrastructure. China appears committed to investing some $20 billion, but it is unclear how much will be spent in Russia rather than on China’s pipelines and infrastructure on its side of the border.

Russia’s commitment matters because the Kremlin and Gazprom will have to spend this money up front—considerably before natural-gas deliveries planned for 2018 actually begin. Moreover, when the gas does begin to flow, it will not immediately commence at the full volume. Finally, according to some reports, Gazprom may have conceded on advance payments for gas (meaning that the company could not use funds received in advance to cover its start-up costs) to protect its pricing. But even if China provides $25 billion in advance, as Russian Energy Minister Alexander Novak has suggested may be possible, Russia and Gazprom will still need a lot of money.

How will Russia finance this huge project? Moscow had $50 billion to burn in Sochi, probably for less return, but likely has fewer options now due to uncertainty over the trajectory of U.S. and European Union sanctions. Even sanctions on individual Gazprom executives—far short of the sectoral sanctions that Washington has threatened (and that the EU has soft-pedaled)—could be enough to discourage Western firms and others who depend on the goodwill of Western governments. Moscow can find other sources of money, but it could take time and may well delay the first deliveries. In extremis, Russia’s government has substantial reserves, though drawing them down too much could be politically unattractive if the economy remains stalled and the government relies on deficit spending to satisfy public expectations for increased government benefits. All of this suggests that it is a little too early to pop the champagne corks (or chill the vodka) in the Kremlin to celebrate.

Nevertheless, the Obama administration would do well to focus much more closely on the overall Russia-China relationship. Among other things, we do not know what other agreements—or informal understandings—Mr. Putin may have reached in talks with Chinese President Xi Jinping. Exchanges of military technology or of intelligence, whether gathered through cyberspying or the old-fashioned way, could be problematic for Washington. So could closer coordination between Moscow and Beijing on a host of international security issues in Asia and the Middle East. None of this would require a Russia-China alliance or any comprehensive agreement on other mutually frustrating issues; Moscow and Beijing might not find it too difficult to compartmentalize and subordinate their differences in competing with the United States. Skepticism toward Russia’s possibly wishful thinking should not facilitate our own.