The Nuclear Deal is a Chance to Change Iran's Behavior 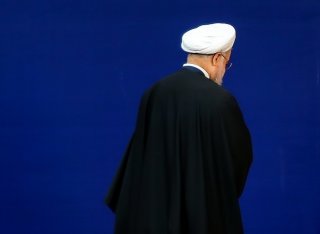 The anniversary of the nuclear agreement was just another day on the calendar, because no one believed that Iran would violate the agreement even before it had enjoyed the considerable benefits that agreement confers on Iran.

The key question facing Western decisionmakers and the American administration is how to make sure that the years gained by the nuclear agreement, assuming that Iran does not violate it, will be utilized to bring about a substantial change in Iran’s policy—in the regional theater, in its support for terrorism, and in its treatment of its citizens—and restore it to a place of honor among the nations of the world.

There is no doubt that the Iranian regime’s supreme goal has been, and remains, its survival and the preservation of the revolution. In this, incidentally, it does not differ from other regimes. Therefore, when the economic pressure generated by the sanctions and concern about their escalation became concrete, Iran’s Supreme Leader Ayatollah Ali Khamenei realized that push had come to shove, and he approved the opening of secret talks with the United States in Oman. Some important conclusions can be drawn from this development: The ultimate decision maker was and remains the supreme leader. He is strong enough to force acceptance of an agreement that had many opponents. And, what is particularly important, he is rational, and weighs costs against benefits.

Today, after the implementation of the nuclear agreement and the removal of sanctions, the political struggle in Iran between the main power groups is also focusing on questions involving the continuation of the revolution and the survival of the system, together with the struggle for positions of economic power as a means of perpetuating rule. The Rouhani faction is striving to prove to the public that Rouhani’s campaign promise—that the centrifuges will continue rotating, and the sanctions will be removed—has been kept. This faction therefore wishes to open up the Iranian economy to foreign investment and to take other measures to ease the public’s economic plight.

On the other hand, the more conservative faction, to whom the supreme leader also belongs, whose main power base is the Revolutionary Guards, is afraid of economic openness to the West, which it believes will contribute to the penetration of money, culture and interests, thereby imperiling the character of the regime in the long term. Furthermore, the policy of the other faction, which seeks Western investment, means above all a blow to the economic monopoly enjoyed by the Revolutionary Guards, providing it with large profits and jobs. It could be said that the Rouhani faction would like to introduce the Chinese model of economic openness and political inflexibility, while the opposing camp cites the example of Gorbachev in the former Soviet Union, where reforms and openness brought about the regime’s collapse.

As I see it, the West lacks real and immediate tools for contributing to the empowerment of the Rouhani faction, a reason cited by some to justify a reconciliatory policy. On the contrary; the West has tools for influencing the other faction—the Revolutionary Guards—which is responsible for problematic Iranian regional policies, its involvement in terror, and its violations of human rights.

To do so, the West, led by the United States, needs to formulate a plan of action in every one of the theaters in which the Revolutionary Guards are active; deny them achievements in Syria and Yemen; repeatedly emphasize to investors the risks incurred in economic agreements with the many straw companies established by the Revolutionary Guards, and at the same time ease the way for cooperation with legitimate companies in the country, according to the commitments under the nuclear agreement; respond resolutely to Iran’s cyberattacks and set a red line with actions, not words, for its continued activities in this sphere; issue statements and take action against Iran’s continued supply of weapons to Hezbollah and the Houthis; tighten overall intelligence and security cooperation with Saudi Arabia and the Gulf states; and take action against the regime’s repression of journalists, artists, ethnic minorities, the Baha’is, the gay and lesbian community, and human rights in general.

These methods of action must be gradual, rather than automatic, and be applied in conjunction with a close and consistent monitoring of the situation and the possible implications of every move. The concern that is sometimes raised—that a response to Iranian acts of defiance might harm the nuclear agreement, and might even cause Iran to back out of it—in my opinion is baseless. Over the next few years the Iranian regime needs stability more than anything. Stability is essential to significant improvement in the Iranian economy, partly based on raising foreign investment, which will be possible only if Iran does not generate a crisis over the nuclear issue.

The years during which the nuclear agreement has kept a distance between Iran and the bomb must not go to waste without bringing about a real change in its policy. The economic achievements so desired by the public in Iran must not help the regime perpetuate its brutality in the regional theater and towards its own public.

Sima Shine was until recently the Deputy Director General of Israel's Ministry of Strategic Affairs, responsible for the Iranian file. Currently she is Senior Research Fellow in the Institute for National Security Studies (INSS) in Tel Aviv.