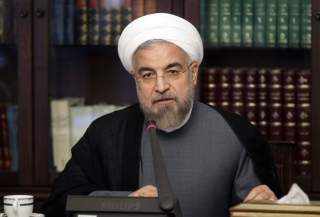 At its core, the proposed nuclear deal with Iran is a bet on the future direction of the Iranian regime. Two former Secretaries of State, Henry Kissinger and George Schultz, argued in a recent critical piece in the Wall Street Journal that the central claim of the deal’s proponents is that Iran will be less aggressive in ten years than it is today.

They implied that they too might sign on if they could believe in such a positive trajectory. In other words, the other criticisms of the deal that they and others have voiced about proliferation in the region, the extensiveness and verifiability of the proposed limitations, etc. are difficult but not insoluble problems. But they rightly point to Iran’s “3 ½ decades of militant hostility to the West and established international institutions” as well as Washington’s questionable record in predicting the course of domestic transformation in places like Libya, Iraq, and Afghanistan as ample grounds for skepticism regarding the optimists’ projections.

If it were simply a matter of rolling the dice on the future of Iran, there would be good reasons to choose caution over optimism. But how might the deal itself affect that future? What impact will it have on Iran’s domestic politics and how should that factor into Washington’s calculations?

That depends on where the Iranian leadership finds itself right now. The Islamic regime was established in the late 1970s and early 1980s in a massive social revolution. The 1960s and 1970s had seen a wave of these sorts of revolutions sweep Asia, Africa, and Latin America. Their fundamental thrust was to establish a dignified, prosperous existence for states and peoples that had suffered the depredations of colonial rule, economic exploitation, and cultural repression. Marxism held tremendous appeal for many of these revolutionaries, but the example of Soviet communism ultimately disabused many of the notion that Marxism offered effective solutions to the problems posed by global inequality. In Iran, Marxism appealed to urban, educated Iranians as well as workers, making the Soviet-oriented Tudeh (Masses) Party the most powerful political organization in the country. In response, Iranian nationalist thinkers such as Jalal Al-e Ahmad, religious revolutionaries such as Ali Shariati, and clerics such as Ayatollah Sayyid Mahmud Taleqani produced a distinctly Iranian Islamic alternative to Marxism. They argued that Islam could ensure a more just and less corrupt economic order, create social cohesion, and enable cultural and political self-assertion. Islam was supposed to provide superior solutions to the problems of a state struggling with underdevelopment and the legacy of foreign domination than Marxism could.

The crowds that brought down the Shah were some of the largest of the twentieth century. They included masses of white and blue-collar workers alongside politically diverse youth and religious seminary students. Accelerating inflation, economic inequality, and a slowing of the rapid pace of growth that had characterized Iran in the mid-1970s helped spark the revolution. For this reason, Khomeini and his circle, backed by newly created institutions such as the Revolutionary Guards, sought to put in place a program of economic reform that would answer the demands of the crowds and prevent a turn back towards the Marxist Left. Khomeini spoke of the aspirations of the Mostaz’afin (the poor), set up a Mostaz’afin Foundation to use state resources to aid the needy, and began an extensive program of land reform and nationalization of major industries, policies inspired in part by Marxist economic prescriptions.

These reforms were neither consistent nor successful. With the Iraqi invasion of September 1980, the Islamic regime in Tehran shifted its focus from domestic change to combatting external enemies. The support given to Iraq in the 1980s at times by both superpowers only exacerbated the sense of siege and messianic mission in the Islamic Republic. Ever since, the political history of Iran has been a continuous oscillation between mobilizing against an external threat and attempting to finally shift the attention of the regime back to domestic issues. When the war ended, many hoped that the regime would focus on domestic tasks, particularly economic reconstruction. Their hopes crystallized in the surprising election of Mohammad Khatami in 1997, who tried to prioritize domestic reform and reduce international tensions. His efforts were checked by forces in Iran militantly opposed to the West, such as the Revolutionary Guards, that were able to leverage continued external tensions against the reformists. The backlash culminated in the election of Mahmoud Ahmadinejad in 2005, a leader so militant that he legitimated the fears of many observers about the aggressive nature of the Islamic Regime.

Ahmadinejad's administration engendered understandable skepticism with regard to the possibility of reform in the Islamic Republic. Kissinger, Schultz, and others point with reason to our poor record in predicting domestic transformation. Such predictions have been wrong about Iran in the past, and we have no guarantees today.

Nevertheless, there are two reasons for optimism now.

The economic situation in Iran, partly because of the sanctions, has deteriorated to the point that new president Hassan Rouhani was elected largely on a platform of economic improvement. So far it appears that the Supreme Leader Ayatollah Khamene’i has supported Rouhani because the protest wave of 2009 showed how volatile the situation is. Khatami was always treated with a certain level of suspicion by Khamene’i, which made his success far less likely. It appears that the Iranian political establishment, both conservative and reformist, has finally understood that the regime is in real trouble if it does not begin providing for its people.

The deal itself is the second reason. It gives Rouhani, Foreign Minister Mohammad Javad Zarif, and others concrete grounds for arguing that Iran is on the verge of achieving enough international stability to finally allow it to turn its attention to the domestic tasks of the revolution.

Domestic reform is more than ever at the center of political discourse in Iran. It is being raised not only by the opposition, but also within the religious seminaries and among those committed to the regime. This debate is not just limited to the economic sphere. Many are questioning how Islamic rule should be manifest culturally. As Abbas Milani, Director of Iranian Studies at Stanford University, described in a recent article in The Atlantic, Iran is in the midst of “culture wars” over the role of Islam in society, and the regime is occupied with preserving and legitimizing Islamic rule. It desperately needs to prove that it can provide economic growth to show that Islamic rule is not just holding Iran back.

Iran might be reaching a point like China in the late 1970s. Desperate economic circumstances, the manifest bankruptcy of its world revolutionary project, and rapprochement with the United States gave the communist regime the breathing space it needed to shift its attention to internal matters. The Chinese Communist Party has not given up power, and it has never publicly disavowed its revolution. Like Iran, though, its revolution was as much about internal improvement as external confrontation. Many now see economic growth rates as Beijing’s main source of legitimacy. Rouhani too has made it clear that Iran has to choose between international isolation and economic growth.

As with China, we should not expect Iran to suddenly perform a political about-face. Iran’s interests are not completely aligned with ours, and that is likely to be the case for the foreseeable future. Tehran supports proxies around the region such as Hezbollah that threaten American interests. There is already much talk in Iran, though, about the flood of resources going to these overseas adventures and how they could be put to better use at home.

A similar phenomenon became evident in the Soviet Union in the late 1980s, as a desire for domestic reform led the regime to gradually abandon its forward international commitments. Furthermore, the United States has been able to deal with many Middle Eastern countries that pursue interests contrary to our own, and Washington has more reason for optimism with Iran than it has ever had with, say, Saudi Arabia.

A nuclear deal with Iran could be an important step in pushing the regime back to concentrating on its revolutionary tasks at home. By offering Iran a measure of security and cooperation, the United States would allow the forces of reform to shape the trajectory of the Iranian Revolution without a perpetual demand to mobilize against a supposed American threat. That could mean weakening the most militant forces in Tehran and enabling, rather than just passively hoping, for the change we want.

We may still be making a bet, but in this case that bet might stack the deck in our favor.

Jeremy Friedman is the Associate Director of the Brady-Johnson Program in Grand Strategy at Yale University, and he will be joining the faculty of Harvard Business School this fall. His first book, "Shadow Cold War: The Sino-Soviet Competition for the Third World," will be published by the University of North Carolina Press in September. He is currently at work on a second book project entitled "Revolutionary Dreams: Constructing Third World Socialisms," that tackles the influence of the ‘Second World’ on the trajectory of post-colonial socialist revolution in the ‘Third,’ using Indonesia, Tanzania, Chile, Angola, and Iran as case studies.