The Nuclear Deal Has Already Made Iran Stronger 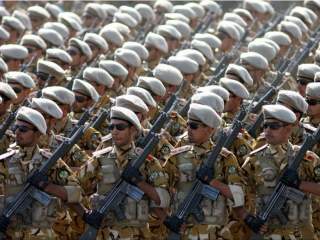 Editor’s Note: The National Interest and the Heritage Foundation have partnered for a multi-part occasional series examining various aspects of the Iran nuclear agreement. The below is part one of this series.

Back in 2011, I attended a meeting with a senior member of the royal family in one of the Gulf states. He posed a simple question that has stuck in my mind ever since: “If President Obama was willing to throw Poland and the Czech Republic under the bus [over the issue of missile defense] for better relations with Russia, why wouldn’t he do the same thing to us for better relations with Iran?”

How right he was.

At the beginning of the nuclear talks with Iran, the stated goal of the P5+1 (the five permanent members of the U.N. Security Council, plus Germany) was to stop Iran from ever getting a nuclear weapon. But the terms of the Iran deal agreed to last year do not accomplish that goal.

Now key American allies in the region, from Israel to the Gulf States, feel hung out to dry and abandoned by the administration. Iran, on the other hand, will become richer, more aggressive, and more dangerous because of the deal.

There are three key flaws in the Iran deal—something that no amount of White House spin can disguise.

First, rather than cutting off all paths to a nuclear weapon, the Iran deal only slows, temporarily, Iran’s progress toward a nuclear weapons capability. Most of the key restrictions disappear after ten to fifteen years.

Furthermore, the International Atomic Energy Agency (IAEA) only has 24/7 access to those nuclear sites that Iran has officially declared. If the U.S. has reasons to believe that illicit nuclear activity is taking place at a location not explicitly stated in the Iran deal, it could up to twenty-four days before inspectors were allowed to visit the site. In fact, using certain delaying tactics—as the Iranians have in the past—Tehran could well stall access to IAEA inspectors for months.

Secondly, the huge windfall Iran receives because of the deal will have geopolitical consequences. Iran has already regained access to around $100 billion in previously frozen assets—the equivalent to almost one-third of Iran’s total GDP. (If the United States were to receive one-third of its GDP overnight, it would amount to $5.6 trillion.)

These unfrozen assets do not include the hundreds of billions of dollars that Iran will receive over time due to the lifting of international economic sanctions. That’s a huge sum of money, and even Secretary of State John Kerry has admitted that some of it will doubtless go to fund Iranian-sponsored terrorism.

In addition to funding terrorism, Tehran will use this injection to find ways to cheat on the deal and speed its progress toward getting a nuclear weapon—all while arming itself to the teeth.

Thirdly, under the Iran deal the U.N. arms embargo ends in five years, and international ballistic missile restrictions are lifted in eight years. This allows Iran to upgrade its conventional weapons through imports from foreign suppliers and enable it to more easily arm its foreign allies and surrogates. Not that the existing ballistic missile restrictions are respected anyway, as Iran’s recent missile test has shown.

In the absence of these restrictions, Iran can pursue an even more aggressive foreign policy in the Middle East. Iran already possesses missiles that can reach the fringes of NATO. And Israel is squarely in the crosshairs. The Associated Press reported that two of the missiles fired in Tehran’s most recent illegal missile tests were emblazoned with the slogan “Israel must be wiped out.”

A more aggressive Iran will buttress Syrian President Assad, boost Hezbollah and embolden the Houthis in Yemen. Iranian-backed instability up and down the Persian Gulf will increase. After all, Iran is the only country in the region whose constitution calls for the “continuation of the Revolution at home and abroad.”

Nothing in the Islamic Republic’s thirty-six-year existence indicates that it will be faithful to its international obligations under the Iran deal. As they say: once a cheater, always a cheater.

After about fifteen years, if not sooner, Iran will be in a very good position with respect to its nuclear program. It will also be better off financially.

The growing threat of a nuclear-armed Iran will lead to an arms race in one of the world’s most dangerous regions. Having ended one nuclear arms race by winning the Cold War, is this the legacy we want to leave to the next generation?

The fallout of the Iran deal might not be John Kerry’s problem, but it will definitely be the problem of America’s next generation of foreign policy practitioners.

Luke Coffey is director of The Heritage Foundation’s Allison Center for Foreign Policy.