The Obama Doctrine: Made for the '90s, Disastrous Today 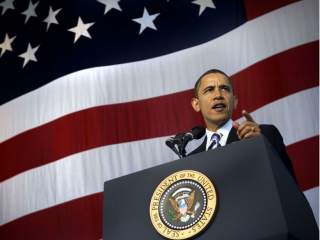 Among the copious commentary on President Obama’s extraordinary foreign policy interview with the Atlantic’s Jeffrey Goldberg (“The Obama Doctrine”), Paul Pillar’s approving piece in the National Interest stands out with its cogent summary of Obama’s thinking. Pillar sees in Obama’s views "Splendidly clear. . . realist principles,” to “deal with the world as it is” and “address specific problems. . . rather than subordinating everything under general labels.” Pillar notes that for the president, “not every troublesome dictator is a Hitler,” “solving a problem does not always mean it is the United States that should do most of the work” and “states have no permanent friends or allies, only permanent interests.”

From all this it is clear that the president sees the world as a continuation of the happy post–Cold War era, with his policies tailored to it. As he told Goldberg, he is generally optimistic about the world’s trajectory. The president’s mindset clearly is strongly influenced by the “realist” approach following the Cold War, associated with General Brent Scowcroft, George H.W. Bush’s national security advisor, whom Obama offers much praise. That mindset assumes that no one is challenging that trajectory—namely, the expanding dominance of the liberal, collective security, market-and-law-based international order. Given this, and the absence of existential military threat to either America (as Obama emphasized) or most other significant states, policy issues involving possible force, such as Kosovo, North Korea, Saddam in the 1990s, and Ukraine and Syria today, are to be viewed like other issues—refugees, climate, the financial crisis—as individual sui generis problems with which a state can chose to engage seriously, halfheartedly (Somalia, Syria) or not at all (Rwanda, Crimea).

In such a world, states make choices on the necessity of engagements based on assessing the individual issue’s cost and benefit. Realists such as Obama, and Generals Scowcroft and Colin Powell, peg costs particularly of military action high and question benefits. Liberal interventionists, symbolized by Madeline Albright, rate highly the benefits of humanitarian imperatives, defending values and keeping the global system as healthy as possible, and thus tend towards intervention. But both groups understand the basic system did not face an existential threat. Thus, each discrete policy decision is one of choice, not of necessity.

Obama, assuming this world continues today, and, as Pillar put it, viewing issues individually without “general labels,” made clear that he sees his decisions as choices. True to his realist roots, he repeatedly weighs costs, especially military intervention, as high and benefits as low, and thus eschews engagements.

There is a case for his approach if the trajectory of history is as he sees it, and thus no “correct” or “incorrect” exists between the realist or liberal interventionist approaches. One can conduct realist policy wisely, or blunder—as Clinton in his realist phase did in not intervening initially in Bosnia. The same applies to liberal interventionist policy, as seen in the 1991 Somalia operation. Given Obama’s views, plus the unhappy outcomes of his “interventionist” first-term moments—the Afghanistan surge, Libya bombing and chemical-weapons red line in Syria—as well as the mood of the American people after Iraq, Obama’s policies not only are understandable, but laudable in the world in which he sees us.

But what if we are not in 1989’s optimistic world of upward trajectory? In his December 2013 essay “The End of History Ends” in the American Interest, Walter Russell Mead argued that “a coalition of great powers” (he named Russia, China and Iran) “has long sought to overturn the Cold War Eurasian settlement that the United States and its allies imposed after 1990; in the second half of 2013 that coalition began to gain ground.” Certainly, subsequent developments—South China Sea militarized “islands,” Crimea, Ukraine, Syria—undergird his argument. This does not mean we are now back in that period of extreme danger, 1940–90, when all foreign policy decisions had to be taken in the context of a Manichean struggle. Neither China nor Russia has any intention of waging war against the United States or fully replacing the global order. But they certainly are, as Mead says, trying to overturn that order in areas of interest to them. The best analogy is the 1930s, when there was a risk that world order could collapse, but no such inevitability.

Under such circumstances, robust reactions to challenges to the system are not "choices," so much as obligations to protect system integrity, as challengers gain strength—and further temptation—by victories against the system's values, especially rule of law and collective security. Even in a world under challenge, you can’t defend everywhere (see Tibet), and applying global priorities to individual problems can fail (Vietnam). But you also cannot react to assaults on places like Crimea or Aleppo, or the Sudetenland, Manchuria and Abyssinia, solely on the basis of their “intrinsic value.” In a collective security system, security has to be nearly indivisible, applying most everywhere, and the values that justify action universal. In such a world, the attitudes Pillar ascribes to Obama, from no permanent friends to avoiding general labels when dealing with individual problems to letting others solve them, can be deadly. You defend a collective security system with the allies and friends you have, not the ones you want; if you are the strongest, you lead, because anything less risks failure; you value “credibility,” a concept Obama repeatedly dismissed, because it is crucial to allies’ trust and system predictability.

That is arguably where we need to be today, even acknowledged by Obama in his September 2015 UN address: “The United States… [built] an international system that imposes a cost on those who choose conflict… [but] dangerous currents risk pulling back into a darker, more disordered world.” But with Goldberg, and with his actions, Obama seems to have forgotten his wise words. By throwing up his hands because Russia cares more about the Ukraine, or wanting Saudi Arabia to “share” the Middle East with Iran, he is not reconciling ancient animosities with no objective right or wrong; he is yielding to those “dangerous currents” that oppose the global status quo. That is the path to catastrophe.

James F. Jeffrey, the Solondz Fellow at The Washington Institute, is a former Deputy National Security Advisor and Ambassador to Iraq and Turkey.