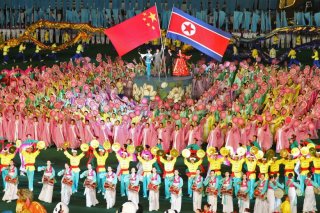 Are Beijing and Pyongyang finally on the outs? Recent reports that the People’s Republic of China (PRC) has not exported any crude oil to North Korea for the last three months certainly raise the possibility.

But hopes of a rift have been dashed before. To assess the situation accurately, one must first understand Chinese security calculations about the Korean peninsula. These calculations are a product of Chinese national interests and concerns of the Chinese Communist Party, all colored with historical and political considerations.

For the PRC, national security is rooted in several “core interests.” These were formally enunciated in 2009 by Senior Councilor for Foreign Affairs Dai Bingguo: The PRC’s number one core interest is to maintain its fundamental system and state security; next is state sovereignty and territorial integrity; and third is the continued stable development of the economy and society.

This characterization highlights that the PRC’s foremost priority is the Chinese Communist Party’s (CCP) ability to retain power. The two pillars of nation and Party are viewed as inseparable. Indeed, a major element of national security is the ability of the Party to “stand up to hostile or meddling powers that might challenge the CCP’s credentials as guardians of China’s international interests.” From the Chinese perspective, national security requires continued CCP rule.

The PRC’s security assessment of Northeast Asia, and especially the Korean peninsula, must reconcile several realities:

·   South Korea (ROK) is a major trading partner, even as it is also a major ally of the United States

·   North Korea is an economic cripple, even as it is aligned with the PRC.

·   North Korea is not necessarily amenable to Chinese advice, much less Chinese instruction.

·   The United States maintains a major security presence in the region, leveraging access to bases in Japan and the ROK.

The “core interests” laid out by Dai Bingguo suggest that the PRC’s security interests would be best served by maintaining good relations with both North Korea and the ROK, while forestalling development of any grand coalition of the ROK, United States and Japan that could contain the PRC and adversely affect Chinese economic development.

Yet, for much of the 2000s, Beijing pressed historical and territorial issues that would antagonize Seoul. In 2003, Chinese officials asked UNESCO to declare ancient tombs from the kingdom of Koguryo in the PRC as world heritage sites. Simultaneously, the “Northeast Asia History Project,” a Beijing-funded endeavor, tried to establish that the Koguryo kingdom was, in fact, a part of Chinese culture. It is believed that the latter project was meant to forestall any future attempt by a reunified Korea to claim Chinese territory with substantial ethnic Korean populations. However, it might have been intended to signal to Pyongyang, and possibly Seoul, that instability on the peninsula could lead to Chinese intervention—justified by historical claims to the northern portion. Chinese claims to the Senkakus and much of the South China Sea appear rooted in similar claims.

Another territorial dispute arose in 2006, when Chinese officials indicated that Socotra Rock was properly part of the PRC, based on the PRC’s exclusive economic zone (EEZ). The issue became more pointed in 2011, when Beijing dispatched three vessels to the vicinity of the disputed are—and, more recently, when it declared that its Air Defense Identification Zone (ADIZ) includes the airspace over Socotra Rock.

Sino-South Korean relations arguably reached their nadir in the wake of the 2010 North Korean attack on the South Korean frigate Cheonan and the subsequent shelling of Yeonpyeong. While neither action was perpetrated by the Chinese, Beijing’s refusal to condemn the attacks alienated the ROK.

Sino-South Korean relations have improved, however, since these 2010 incidents. Economic ties between the two states were never disrupted, and the constant stream of commerce limited the impact of Chinese reticence. The PRC remains the ROK’s most important trade partner—serving as both the largest exporter of goods to the ROK and as its largest export market. Efforts to negotiate a Sino-South Korean free trade agreement reflect this extensive economic relationship.

Meanwhile, Chinese officials not only went silent on the issue of Koguryo, they took steps to curry favor with Koreans. Beijing’s decision to build a museum dedicated to Ahn Jung-geun is clearly an attempt to improve relations with the ROK—at the expense of Japan.

Beijing likely thinks the time is right to foment trouble between Seoul and Tokyo, given the two nations’ shared suspicions of Japan, and especially Japanese Prime Minister Shinzo Abe. Moreover, the last-minute failure to establish an intelligence-sharing agreement between Japan and the ROK reflects ongoing, if not deepening, tensions between the two states and also jeopardizes any meaningful military cooperation in such areas as missile defense.

Given the geographic realities of Northeast Asia, the inability of Japan and the ROK to share intelligence information, including early warning, significantly undermines the effectiveness of any missile shield. And given the substantial Chinese investments in ballistic missiles as a major striking force for the PLA, this clearly benefits Beijing.

On the other hand, the East China Sea ADIZ declaration clearly antagonized the ROK. The ROK dispatched jet fighters to challenge the PRC’s claim regarding air space over Ieodo (the Korean name for the disputed area) and instructed its flag carriers not to notify the Chinese military about commercial flights entering the area. The ROK also extended its own ADIZ to cover Ieodo and stepped up its patrolling.

The PRC’s reaction was muted, however. The ROK, in turn, has now decided to let airlines to inform the Chinese of their flight plans. This suggests that relations between Seoul and Beijing are improving—and that the PRC is willing to be conciliatory toward the ROK, if only to develop additional opportunities to undermine ROK-Japan and ROK-Japan-U.S. security cooperation.

Beijing’s warming toward Seoul has not, however, translated into greater willingness to criticize Pyongyang. For example, the PRC reacted negatively—indeed, obstinately—to the UN’s damning, 400-page report on human rights in North Korea. That Chinese diplomats would condemn the commission’s findings as not being “impartial, objective, and effective” because of “the inability of the commission to get support and cooperation from the country concerned” reflects the lengths to which they have turned logic on its head to shield North Korea. It also suggests that the PRC will only go so far to improve relations with the ROK at the expense of its links to the north.

Chinese Security and the Future of the Korean Peninsula

Given the importance of the Korean peninsula in the PRC’s security calculations, Beijing naturally seeks to influence security developments there. And how the political situation develops in the wake of Kim Jong-un is doubtless a major concern.

For the PRC, the ideal outcome in a post–Kim Jong-un world, arguably, would be for the Korean peninsula to remain divided, but with a North Korean leadership that was more amenable to implementing economic reforms. A system that loosened centralized planning and adopted at least some market-reform measures (such as Deng did in the 1980s) would both alleviate North Korea’s extreme poverty, and reduce the likelihood of a domestic meltdown that would saddle the PRC with a refugee crisis. Moreover, a more economically capable North Korea would be a potential trading partner, giving the PRC greater economic leverage against the ROK.

Such an outcome, however, is unlikely, given the ruthless elimination of all North Korean elements that might support anyone outside the Kim-family regime, beginning with the 1956 purging of the “Yan’an” and “Soviet” factions.

If the PRC cannot secure a compliant, relatively reformist North Korea, it would likely strive to create a neutralized, reunified Korean peninsula under Seoul. There can be little doubt that reunification would entail an extensive—and expensive—period of rebuilding and assimilation. While it’s impossible to forecast the cost with any accuracy, estimates range from several hundred billion dollars to $1 trillion or more. Meanwhile, the ROK Finance Ministry in 2013 estimated that any reunification would likely require the ROK to devote, for a decade, 1 to 7 percent of its annual GDP to rebuilding and assimilating the North. Such massive costs will require substantial adjustments in South Korean spending and budgeting, as well as outside aid and financing. The PRC, with its enormous hard currency reserves, may be willing to play a role—for a price.

By contrast, one of the worst case scenarios for Beijing would be a reunified Korean peninsula that was allied with both the United States and Japan. In that situation, the PRC would see itself being contained by three of the largest economies in Asia, adjacent to its territory and capable of wielding enormous military power. Certainly, the prospect of American forces being based in close proximity to Chinese territory, even if not in the former DPRK, would be concerning, if only due to the potential for intelligence collection. Moreover, the Chinese would likely see the steady expansion of NATO as presenting a malignant model for East Asia, with an American-led coalition steadily encroaching upon Chinese territory and jeopardizing the PRC’s ability to access the seas.