The Only Iran Deal Alternative Worth Considering 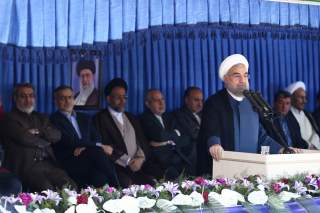 The current debate on the Iran nuclear agreement has focused on potential alternatives to the deal. Led by Israeli prime minister Benjamin Netanyahu, opponents of the proposed accord claim a better deal can be found. Its proponents, chief among them President Obama, argue that the current agreement will prevent Iran from developing a nuclear-weapons capability. Moreover, they claim that opponents have not presented a realistic alternative. Congressional rejection of the nuclear accord could lead to an Iranian nuclear-weapons capability, and most likely “some form of war,” as President Obama has claimed. Can a better deal be found, as opponents claim? Is war the only alternative to the Iran nuclear agreement?

The nuclear accord has been nearly thirteen years in the making. In 2002, an Iranian exiled opposition group disclosed the Iranian government’s construction of secret nuclear facilities, setting off a tortuous dispute between Tehran and the world. There were moments of hope. Iran and the EU3 (France, Germany and the United Kingdom) agreed that Iran would temporarily cease uranium enrichment in 2004 in return for “a mutually acceptable agreement on long-term arrangements,” including “objective guarantees that Iran’s nuclear program[me] is exclusively for peaceful purposes;” this deal was negotiated by then national security advisor Hassan Rouhani (who is Iran’s current president) and reportedly blessed by Supreme Leader Ayatollah Ali Khamenei. The agreement fell apart amidst disputes between Iran and the EU3. Iranian government officials also claimed that the George W. Bush administration had opposed any level of Iranian enrichment at the time, leading to the collapse of the EU3 deal and resumption of enrichment in 2005.

The subsequent presidency of Mahmoud Ahmadinejad (2005-2013) witnessed heightened tensions over the nuclear issue. Iran under Ahmadinejad responded to growing international and American sanctions against Iran by advancing the nuclear program. At times it appeared that Iran and the United States were on the verge of war. The 2013 election of Rouhani ended the game of chicken between Iran and the United States. Rouhani agreed to retrench the program in exchange for sanctions relief; by this time Iran’s nuclear program had grown significantly while its economy declined precipitously.

The current nuclear accord is a product of reality: the past thirteen years have shown that Iran would not accept a complete end to uranium enrichment, even under sanctions and the threat of war. But it is willing to make compromises assuring the P5+1 (the original EU3 plus China, Russia, and the United States) that its nuclear program cannot be used to produce nuclear weapons. For example, in return for sanctions relief, Iran has agreed to the most stringent inspections regime faced by any country. It has agreed to dramatically reduce the number of its centrifuges, turn the hardened Fordow facility into a research center, reconfigure the Arak heavy-water reactor, and limit its stockpile of enriched uranium. The current agreement lasts fifteen years, but Iran will still be a member of the Non-Proliferation Treaty after that time period, and will remain under close international inspections and scrutiny.

Is there a better deal than this? Ideally, Iran would not have a nuclear program at all. But it is completely unrealistic to expect such an outcome, given the history of nuclear negotiations. P5+1 support for the agreement is based on an acceptance of an Iranian civilian nuclear program, rather than a complete surrender of all nuclear activity. Critics such as Netanyahu may want nothing short of a complete dismantling of Iran’s program, but the P5+1, comprised of some of the world’s largest economies, does not endorse this view. Congress may reject the agreement and leave U.S. sanctions standing, but the rest of the world is under no obligation to enforce them. Europe, China, India and Russia want to trade with Iran again. Some foreign countries and companies might be hesitant to deal with Iran in consideration of U.S. sanctions, but many others are likely to find ways to ignore or bypass them. This can be done through banks set up to deal with Iran exclusively; under U.S. sanctions, any company dealing with Iran could be penalized by losing access to the U.S. financial system. However, banks with no ties to the U.S. financial system could do business with Iran without being penalized by the United States. In addition, U.S. enforcement of sanctions could hurt the American economy. Will Washington sanction the Chinese Central Bank if it deals with Iran? A trade war with China over an American rejection of the nuclear accord could be a potential cost of Congress rejecting the accord.

The P5+1 and Iran will not go back to the table if Congress rejects the agreement. Iran will keep its entire nuclear program without facing any restrictions while arguing for the lifting of all international sanctions. It could even accelerate its nuclear program in the future; thus, the most realistic alternative to the current agreement is a nuclear weapons–capable Iran with better ties with the international community. Iran will still be isolated from the United States, but on the issue of Iran, the United States will be isolated from the rest of the world.

At that point, a nuclear-capable Iran would be a major security threat to both the United States and Israel. But Washington needs global cooperation to enforce sanctions, and if it cannot tighten the sanctions regime against Iran, then it has two basic choices: tolerate an Iranian nuclear-weapons capability, or conduct military strikes against Iran’s facilities. The latter choice would result in a unilateral war condemned by the international community, possibly including America’s closest allies. And a war with Iran would not even guarantee an end to its nuclear quest, but could actually convince it to pursue nuclear weapons more aggressively than before.

The United States should be commended for building an international coalition to pressure Iran into signing the agreement; but now it is time for Washington to prove its leadership and implement the deal. The alternative is a major diplomatic defeat for America, and an unrestricted Iranian nuclear program.