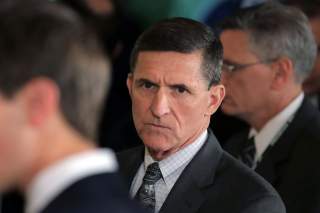 If being brash, vulgar, uninformed, undisciplined, uncouth, occasionally silly and sometimes crazy like a fox were impeachable offenses, Donald Trump would have been presidential toast a long time ago. None of them are, so he is still with us.

This drives many members of the liberal media—most of whom had heavily invested in a Hillary Clinton election victory, and were taken completely by surprise when Trump scored his upset victory—absolutely bonkers.

Indeed, as I have observed in print more than once, one of the best things Trump has going for him is the fact that his own antics, goofy as they sometimes seem, have a way of rendering his opponents even goofier. There are moments when he literally drives them nuts.

Such a moment came last week with the announcement that Michael Flynn, the retired Marine Corps general, early Trump supporter and fired national security advisor, had pled guilty to lying to the FBI about two conversations he had with Russia’s then ambassador Sergey Kislyak in the period between the election and the inauguration. In return for his guilty plea, Flynn hopes to avoid jail time and has agreed to cooperate with the Mueller investigation. What, if anything, he has to say that could incriminate President Trump in any way is a matter of conjecture and, in the case of some compulsive Trump haters, morbid wishful thinking.

Nevertheless, the instant result was a media feeding frenzy, in some cases so hysterical that at least one major outlet (ABC News) ran with an unsubstantiated report so over the top that even MSNBC singled it out as discredited—some might call it “fake news”—and ABC eventually had to issue a retraction.

Meanwhile the Gray Lady, while not yet singing, had gone into her gloating mode. In its lead Saturday (December 2) editorial, entitled “Flynn Flipped. Who’s Next?” the New York Times could scarcely contain its glee: “Well, well, well,” it began. “We now have a better idea of why President Trump went to such great lengths to shield Michael Flynn, his former national security advisor, from the prying eyes of the F.B.I. and various congressional committees over the past year. Unfortunately for Mr. Trump, it didn’t work out as he had planned.”

After a droning recitation of stale facts and factoids that have been on the public record for months—and while revealing nothing new—the Times concluded, “Mr. Trump built and sustained his long, gaudy career by demanding loyalty from people to whom he gave nothing in return. He is not used to being on the short end of that deal.”

If you were to substitute “Bill and Hillary” for “Mr. Trump” in that sentence, you would have a spot-on description of the seamy couple the Times defended, excused and enabled throughout long, scandal-tainted careers, ending when Hillary—despite the Times’ endorsement and unabashedly biased reporting against the Trump candidacy, went down in defeat last November.

So what have we here? Nothing more, I would suggest, than a case of old wine in new bottles. What Michael Flynn pleaded guilty to last week—concealing or lying about contacts with Ambassador Kislyak after the election and before the inauguration—was exactly what President Trump revealed and fired him for in the early days of his administration. Nothing new here. Period.

Indeed, the only new information to come out about the investigation of real or imagined—and as yet totally unproven—“collusion” between the Trump campaign and the Russian government during the election campaign was a tantalizing tidbit that even managed to make the front page of the Sunday (December 3) Washington Post. The headline tells the story: “Russia investigator axed over Trump text: Agent moved off probe in summer for privately criticizing president.”

According to the Post, “The former top FBI official [one Peter Strzok, deputy head of counterintelligence at the Bureau] assigned to special counsel Robert S. Mueller III’s probe of Russian interference in the 2016 election was taken off that job this summer after his bosses discovered he and another member of Mueller’s team had exchanged politically charged texts disparaging President Trump and supporting Hillary Clinton.”

To borrow a phrase from the New York Times editorial cited above, “Well, well, well.”

Aram Bakshian Jr. served as an aide to presidents Nixon, Ford and Reagan. His writing on politics, history, gastronomy and the arts has been widely published in the United States and overseas.