The Only Thing Nigeria Fears More Than Boko Haram 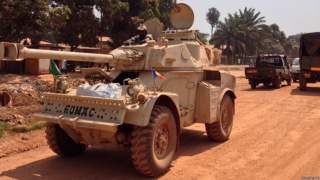 Five years into Boko Haram’s pernicious insurgency in northeast Nigeria, the casualties continue to mount. Though exact figures are difficult to pinpoint, estimates suggest fighting between the radical Islamic group and Nigerian forces killed upwards of 6,000 civilians in 2014. A January massacre in the town of Baga took the lives of hundreds more. Boko Haram’s latest casualty, the widely anticipated Nigerian election originally slated for February 14, has been postponed until March 28 for “security” reasons. Nigeria’s demonstrably ill-equipped army, having failed for five years to contain the rebellion, is now expected to do so in six weeks.

At the same time, novel efforts to combat Boko Haram from a different angle show signs of promise. In January, Chad—Nigeria’s battle-tested neighbor—deployed troops to the Nigerian frontier with Cameroon, forming a defense against militants who have taken refuge there. In early February, the Chadian military launched two cross-border incursions into Nigeria itself, reclaiming the border town of Gamboru Ngala from extremists. Niger, too, coordinated with the Chadian air force to thwart an assault by Boko Haram on its southern periphery.

These events mark the first shots fired in what will become an African Union (AU) intervention force, expected to number around 8,750 soldiers, police and humanitarian officials. This comprises 3,500 each from Nigeria and Chad, with smaller contributions from Benin, Cameroon and Niger.

On January 21, as plans for the new mission were being developed, Boko Haram’s purported leader Abubakar Shekau exhorted “the kings of Africa” to “attack me even now. I’m ready.” Nigeria’s neighbors have accepted the challenge, honoring Shekau’s wish.

If the emerging AU force achieves success, the damage to Boko Haram will have been in part self-inflicted. It was the extremist group’s brazen abduction of more than 200 Nigerian schoolgirls in April 2014—the impetus behind the #BringBackOurGirls campaign—that inspired closer cooperation between Nigeria and its four immediate neighbors: Benin, Cameroon, Chad and Niger. Within a month of the kidnappings, the five countries met in France, vowing to collectively wage “total war” on Boko Haram. (Around the same time, President Obama deployed eighty U.S. military advisers to an operating base in Chad to assist in the search for the captured schoolgirls. France, in conjunction with plans to station 3,000 troops across the Sahel, took on a supporting role in the budding regional coalition.)

Moreover, what began as Boko Haram’s cross-border efforts to recruit new members and establish rear bases has transformed into more active attempts to destabilize Nigeria’s neighbors, particularly Cameroon and Niger. Rather than cowing regional players, however, these attacks have encouraged the region to fight back.

Shekau’s taunting mirrors the bravado of Al Qaeda in the Islamic Maghreb (AQIM), which in 2012 dared foreign troops to invade Islamist-held northern Mali, threatening to turn the Sahara into a “graveyard for your soldiers and a disaster for your interests.” The following year, a potent, French-led force swept through northern Mali and sent the boastful Islamists scrambling into the desert.

The objective of the new Nigerian mission is to match the military accomplishments in Mali, or at least the African Union’s relative success in combating al-Shabaab in Somalia since the Kenyan invasion in 2011. To that end, many Nigeria watchers are hopeful about the prospects of the coordinated regional force as a refreshing alternative to five years of bungled counterinsurgency.

Chad, expected to play the commanding role in the AU force, is no stranger to conflict. Armed with little more than a fleet of Toyotas and French MILAN anti-tank missiles, the Chadian army in the 1980s brought an invading Libyan force to its knees. President Idriss Déby, himself an ex–army commander, has fought off a flurry of rebellions in the country’s east since taking power in a coup d’état in 1990. More recently, Chadian troops fought alongside French Special Forces in early 2013 in some of the toughest offensives against Islamist militants in northern Mali.

A regional force with Chad at the helm, however, will face both challenges and risks. For one, Boko Haram is likely to prove a more ruthless and resilient foe than previous adversaries the region has confronted. The threat is also immensely diffuse. Though media and policy makers have a tendency to cluster Boko Haram as one entity, it is more likely an amalgam of relatively independent cells, making the insurgency harder to defeat.

Moreover, Chad’s tenuous human-rights record raises a number of questions. Last April, President Déby pulled the plug on military involvement in the Central African Republic (CAR), where Chadian peacekeepers were widely accused of gunning down civilians and siding with a Muslim rebel coalition. At home, Déby has been Chad’s one and only president since 1990, and international monitors accuse him of brutally repressing political opposition.

Broadly speaking, Chad’s stated foreign-policy objectives—including regional stability and civilian protection—do not tell the whole story. Military contributions in Mali, CAR and Nigeria are by no means altruistic. Should Chadian efforts turn the tide in Nigeria, expect them to come at a price. This could entail additional oil rights around Lake Chad—which straddles the border between Nigeria, Niger, Cameroon and Chad—or a more general admission to cement Déby’s role as regional kingmaker, a part he has actively pursued.

At this point, the Nigerian government appears content to permit its four neighbors to hunt Boko Haram on its territory, provided that they cooperate with Nigeria’s armed forces. Failure to make progress, however, could place avowed coordination under strain.

On balance, an African intervention force for Nigeria is a novel, welcome development in an arena that has seen no shortage of failures. Boko Haram, whose now-infamous kidnapping last year earned the group regional and global scorn, may soon meet its match. But as great as it all sounds, putting an end to the killing—while keeping Chad’s outsized influence at bay—will be an enormous challenge.

Andrew Wojtanik is a freelance writer and analyst and former research assistant at the Harvard Kennedy School’s Belfer Center for Science and International Affairs. He manages a blog on forgotten conflicts titled Notes on the Periphery.