The Only Thing Scarier Than Iran's Nukes 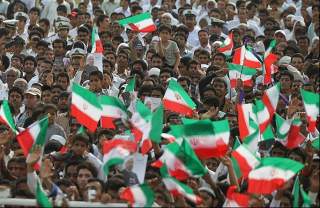 Denying Iran nuclear-weapons capability is not only a means of limiting the proliferation of weapons of mass destruction. It is also part of a broader ideological struggle that Tehran is taking much more seriously than is the United States.

This month, Iran celebrates the 36th anniversary of the return of the Ayatollah Ruhollah Khomeini from exile in 1979 and the advent of the Islamic Revolution. In speeches, rallies and state-sponsored television shows, Tehran is reaffirming the messages of the heady days of the downfall of the Shah, the supremacy of Shi’a Islam and the destruction of Iran’s enemies, particularly Israel and the United States. The celebration reminds us that Iran is not just a Middle Eastern adversary state with dreams of regional hegemony. It is a revolutionary regime seeking to reshape the map of the region, and the belief system of the world.

Tehran remains committed to its revolutionary agenda. Today, Iran is active in promoting its ideology in Iraq and Afghanistan. Iran supports the largest international terrorist network in the world, including backing Hezbollah and Hamas. Iranian-backed Houthi rebels in Yemen have captured vast swathes of territory and disrupted the established government. This is a revolution in action, and it illustrates that Tehran is not simply seeking to extend its influence in the region. Rather, it is working to impose Khomeini’s Shi’ite Islamist agenda beyond its borders.

Yet the White House is loathe to wage a war of ideas with Iran. Given President Obama’s well-documented sensitivities regarding Islam, his administration prefers to focus on other aspects of the effort to achieve global stability. Jihadist terror groups such as the Sunni-aligned ISIS or pro-Tehran Houthis are termed “violent extremists.” The Western rivalry with Iran is reduced to the language of power politics, ignoring the ideological dimension.

But Iran is not seeking nuclear-weapons capability simply to preserve its regime; it is also doing so to extend its revolution. When Iran can deter the use of force, it can also increase the reach of its ideas. And if Washington refuses to promote a convincing counterargument for freedom, it is unilaterally disarming.

Tehran, meanwhile, is not timid about promoting its vision in the West. In January, in the wake of the jihadist attack on the offices of the magazine Charlie Hebdo in Paris, Iranian Supreme Leader Ayatollah Ali Khamenei penned an open letter to the youth of the West making the case for Islam. He maintained that the view of Islam most young people receive is filtered through hostile governments and negative press reports. He asked why “attempts are made to prevent public awareness regarding an important issue such as the treatment of Islamic culture and thought” and encouraged young people to “study and research the incentives behind this widespread tarnishing of the image of Islam.” As well, Khamenei asked them to study the Koran themselves, because, he said, “the future of your nations and countries will be in your hands.” For its part, the White House is making little effort to promote the cause of freedom among Iran’s youth, even though—given the radical, repressive nature of that regime—it is likely to be a much easier idea to sell.

Focusing only on the nuclear dimension of the Iranian threat is a mistake, because the ideological conflict is the root cause of the problem. Absent Tehran’s revolutionary aspirations, there would be no drive to acquire weapons of mass destruction and no Iranian-backed global terrorist network. Arms-control agreements, verification regimes and contentious international inspections cannot guarantee that Iran is not still secretly developing nuclear weapons.

When a regime leads its people in chants of “death to America,” we should do them the courtesy of believing that they mean it.