The Only Way Out of the Qatar Crisis 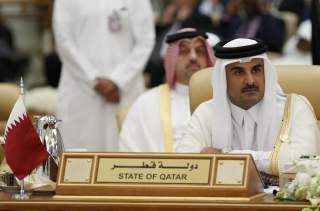 Qatar has been known for years as a small peninsula nation that punches far above its weight. Its immense oil wealth and enormous influence, through its English- and Arabic-language Al Jazeera channels, have given it diplomatic clout across the Arab world. Its soft power has been felt in negotiations in Darfur, Tripoli, Sanaa and elsewhere. Everywhere it has been either admired or envied.

Now Qatar is on its back feet, fighting off criticism from all sides. Qatar’s candidate to run UNESCO is now almost certain to lose; a few months earlier, he was the frontrunner. Activists are pressing FIFA to bar Qatar from hosting the World Cup. Pressure is mounting to close the U.S. air base in Qatar; U.S. Air Force general Charles Wald, who opened the base in 2001, is now, in retirement, publicly calling for its closure. A coalition of thirty-four thousand predominantly African American churches is set to protest Qatar in Washington, DC, on June 28, citing Qatar’s persecution of Christians, Jews and other religious minorities. (Qatar bans crosses on the outside of churches and bars public prayer by Christians, even though there may be more Christians in the country than the three hundred thousand native Qataris.) The protest, outside Qatar’s embassy at Twenty-Fifth and M Streets, is the first-ever public demonstration against Qatar in Washington. It won’t be the last.

Even more dramatically, Qatar’s neighbors and allies have turned against it. Saudi Arabia, Egypt, Bahrain and the United Arab Emirates have cut diplomatic ties with Qatar and closed their air and sea ports to Qatar’s planes and ships. The Arab-language media is full of venom directed at Qatar. Now it is either pitied or feared.

What happened? Qatar was found to be funding the enemies of America and its Arab allies. Washington policymakers are concerned that Qatar has funded, according to the U.S. State department, Al Qaeda affiliates in Syria as well as elements of ISIS—the very groups America is bombing in its campaign to liberate northern Iraq. It also supports Hamas, which both the United States and EU have designated as a terrorist organization. Bahrain believes that Qatar is supporting armed opposition groups against its royal family. The Saudis fault Qatar’s financial support to the Yemen-based Houthi rebels (opposed to the Saudi regime) as well as Qatar’s backing for violent opposition groups in the Saudi province of Al Qatif, which is mostly Shia.

Meanwhile, Qatar has offered a sanctuary to the Muslim Brotherhood and known terrorists. The oil sheikhdom also shelters the Muslim Brotherhood’s spiritual guide, Yusuf al-Qaradawi; Khaled Meshal, who was until recently the leader of Hamas; and Abbassi Madani, an Algerian Islamist leader—as well as many Taliban leaders. Nor was Qatar simply giving these extremists a roof and a cot. It gave them a platform, through Al Jazeera, to raise funds, woo followers and boost their prestige.

All of this duplicity and support might have been tolerable, as it too often was before the September 11 attacks, were it not for the Arab world’s confrontation with Iran. The Islamic Republic is already engaged in both a direct and a proxy war against the Sunni states. Iran’s state-run broadcasts refer to Bahrain as Iran’s “eighteenth province,” even though Persians have not ruled there for some three centuries, and call on believers to end Saudi control over the Muslim holy places in Mecca and Medina. The UAE has a bitter territorial dispute with Iran. And let’s not forget that Iran is developing atomic weapons and the missiles to carry them; it may be planning to settle its religious and regional arguments with a Hiroshima-style blast.

In contrast with its neighbors’ conflicts with Iran, Qatar is in business with the Islamic Republic. It shares with Iran the Pars Sud gas field, one of the world’s largest.

While Iran was under embargo, Qatar continued to sell Iranian natural gas to Europe. The shared gas field gave Qatar the perfect cover to help its partner in crime, Iran. Yet shipping by sea is slow, costly and risky. Qatar proposed a pipeline across Syria to move Iran’s energy products (as well as its own) to the power-starved European market. A pipeline would have cut costs while strengthening Qatar’s hand. The Syrian dictator soon put an end to this pipe dream.

In short, Qatar’s support for Iran was the last straw for its neighbors. The U.S. State Department is trying to be neutral, and is asking for evidence of Qatar’s transgressions. Meanwhile, President Donald Trump has been far clearer: he has demanded that Qatar stop funding America’s enemies.

Clearly, Qatar must stop opening the money spigot for groups designated as terrorists by its allies, and it should turn over the terror leaders it is hosting to face justice in their native lands.

The U.S. State Department should also invite Morocco to help. Iran, and indirectly Qatar, is backing armed uprisings by minority Shia groups across the Sunni-majority Arab world. Morocco’s king, Mohammed VI, is also his kingdom’s supreme religious ruler. His words and moderate religious teachings have calmed restive Shia populations and inspired them to oppose violence. Under the king’s leadership, Morocco is now enjoying a new influence in Africa. Mohammed VI, as a spokesman for political and religious moderation, is an important voice to combat Shia uprisings and Sunni reprisals.

Qatar must stop fanning the flames of Islamic division, and Morocco and the Gulf Arabs should be given a real chance to head off a religious civil war between Sunnis and Shia, which could cost millions of lives in a war that could drag on for decades.

We have come to a time when confrontation with Qatar will produce peace, and compromising will lead to war. Trump’s instincts are right. If Qatar doesn’t change, the world around it will.