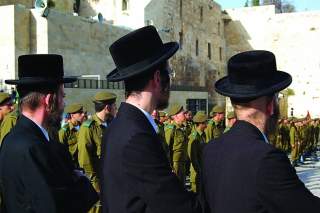 This insight extends beyond the theological realm, for such bitterness is the mental condition or constriction that afflicts too many Israeli Jews today. Their ressentiment extends in every direction: toward the Palestinians for “inciting hatred”; toward the Arab world, whose 2002 peace initiative they dismiss out of hand; toward the Christian churches, whose anti-Semitic recidivism they regard as ineradicable; toward Islam, which they see as inherently hostile to Judaism (never mind a millennium of generally peaceful coexistence in Muslim lands); toward the European Union, supposedly in thrall to “multiculturalism” and terror; toward President Obama, notwithstanding his pro-Israeli protestations; and toward a world that they feel will never fully recognize or accept them. I find it strange that such people, who think of themselves as Zionists, thus implicitly deny one of the fundamental tenets of Zionist ideology—namely, the claim that Zionism can secure the Jews’ place among the nations and has cemented their legitimacy as a nation. If it were really true that, after sixty-seven years of sovereign existence, Israel had failed to achieve this central objective, what conclusions would we be obliged to draw about the realism or practicality of Zionism as a political doctrine?

HAPPILY, SUCH ideas are not universal in Israel. There remain plenty of people in the country who are not nursing such pseudohistorical aches and pains. Many of them are located in the universities, for the most part beacons of liberal values—and consequently under attack for that very reason. (Wistrich lamented that politically he felt rather a fish out of water among most of his colleagues.) The judicial system, for all its limitations, remains relatively uncontaminated, though inflammatory attacks on the judiciary, especially directed against the Supreme Court, are common in nationalist rhetoric. The newspaper Haaretz continues to be outspoken in its criticism of the evils of hypernationalism, religious coercion, and repression of Israel’s second-class citizens (Israeli Arabs), quasi-colonial subjects (Palestinians in the occupied territories), and virtually rightless noncitizens (asylum seekers and others who endure peculiarly degrading treatment—more than two thousand of them, mainly from Darfur and Eritrea, in a wretched “detention facility” at Holot in the Negev desert).

Many opponents of the current government despair of the possibility of change. Opinion among Israeli Jews has undoubtedly shifted to the right in recent years, particularly since the Gaza war of last summer. The election prospects of the center-left “Zionist Camp” (Netanyahu, in a typical McCarthy-style slur, calls them the “anti-Zionist Camp”) are generally minimized. Even if they (the Labor Party, led by Isaac Herzog, and his centrist ally, Tzipi Livni, with her supporters) emerge as the largest group in the next Knesset, they would face a considerable uphill struggle to form a viable coalition government.

I leave Israel at the end of January amid a heightened cacophony of shameless grandstanding and renewed allegations of financial malversation. Six major generals in the national police force alone have resigned in disgrace after they were accused of sexual misconduct or photographed consorting with organized crime bosses. Tensions are rising on the northern border. Simmering resentment in the occupied territories threatens to boil over at any moment into a third intifada. In some ways the political atmosphere now reminds me of that around the time of the assassination of Yitzhak Rabin in 1995.

So what’s new? Some observers are curiously content to see Israel as a perpetually turbulent place in what they call (in a phrase with disturbingly racist undertones) “a troubled neighborhood.” There is no prospect, they maintain, of genuine peace with the Arabs; the best that can be hoped for is “conflict management.” But the status quo is not a viable option for Israel. The occupation that poisons every aspect of Israeli politics and society, pollutes its value system and gradually undermines its democracy is not sustainable—not politically, not diplomatically, not militarily, not in the longue durée, not in the medium term, not even in the short run. It confronts Israel with a dilemma that its leaders and its electorate have avoided for far too long but that will have to be faced by the incoming government of whatever hue. This is where there is a genuine and politically inescapable point of comparison with late-apartheid South Africa.

Israel does not await its Mandela; it awaits its de Klerk.

Most ordinary Israelis yearn, more than anything, for a normal society, one where they can go about their daily lives in freedom: from interference by primitive clerics who restrict their rights to eat, travel, enjoy themselves or marry as they wish; from the burden of extra taxes to support crazed settlers in Hebron and elsewhere in the West Bank; and above all, from the permanent cloud of anxiety that hangs over the country so long as the conflict with the Palestinians remains unresolved. I do not know who will win the election. But I do know that whoever can steer Israel toward that culture of normality—the prize that historical Zionism promised to the Jewish people—will have taken the first step on the road to restoring this country’s self-respect, sense of proportion and human decency.

Bernard Wasserstein is an emeritus professor of modern European Jewish history at the University of Chicago. His most recent book is The Ambiguity of Virtue: Gertrude van Tijn and the Fate of the Dutch Jews (Harvard University Press, 2014).