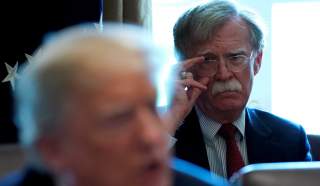 President Donald Trump, at the urging of National Security Advisor John Bolton, has withdrawn from the Iran nuclear agreement, putting the future of the deal in jeopardy. Trump did this despite the fact that Iran is in compliance with the deal, that the deal has served to shrink Iran’s nuclear program and keep it away from a bomb, and that it has prevented another costly war in the Middle East.

Just how bad will things get with Iran now that Trump has acted? Hard to say, but we can see the writing on the wall: Tehran could restart its nuclear program and edge closer to building a bomb. This would lead to increased calls from the right to—once again—stop Iran from acquiring nuclear capability, by military force if necessary. Trump is already indicating that things are heading in that direction. Just one day after breaking out of the Iran deal, Trump warned of “very severe consequences” if Iran resumes its nuclear program.

To fully understand the risks of the Trump administration abandoning the Iran deal, one need only recall what happened in North Korea after Bolton, then in the Bush administration as an under secretary of state, did his part to kill another landmark nuclear deal—the Agreed Framework.

In 1994, the North Korean regime threatened to go nuclear for the first time. To prove the point, Pyongyang expelled all international inspectors and made preparations to extract weapons-grade plutonium from its Yongbyon research reactor. The risks of a conventional conflict—even then— were high because the Clinton Administration was seriously considering military intervention in case diplomacy failed. An unprecedented meeting between former president Jimmy Carter and North Korean leader Kim Il-sung eventually led to the first U.S.-North Korea nuclear deal, the Agreed Framework.

Though only four pages long, the Agreed Framework served a similar purpose to the 159-page Iran agreement: to prevent a state from developing nuclear weapons. And, though neither agreement was perfect, the Agreed Framework—like the Iran deal thus far—proved successful, preventing the North from producing dozens more nuclear weapons worth of fissile material. For nearly a decade, the North readmitted international inspectors, stopped producing plutonium and shelved plans to build two large reactors.

Despite these significant benefits, there were those who vehemently opposed the Agreed Framework and were bent on killing it. Sound familiar? Bolton, following reports that the North was secretly pursuing a uranium enrichment program, wrote later, “This was the hammer I had been looking for to shatter the Agreed Framework.”

Opposition to the Agreed Framework was indeed substantive (North Korea began a uranium path; the United States did not fulfill key obligations), but much had to do with matters unrelated to North Korea. The George W. Bush administration came into power resistant to engaging with adversaries and determined to exercise status as the world’s sole superpower, which led to the war with Iraq. Then-Vice President Dick Cheney said it all when he declared, “We don’t negotiate with evil. We defeat it.”

Instead of working to improve the Agreed Framework by adding additional, stronger measures to what already existed, the Bush administration chose to back out of the agreement in 2002. Since that time, North Korea has consistently shocked the world with the speed, sophistication, and fulfillment of its nuclear ambitions. In the last year alone, Kim Jong-un demonstrated the country’s most powerful nuclear and missile tests yet—a hydrogen bomb and an intercontinental ballistic missile capable of hitting the United States. In spite of famine, international isolation, and mounting sanctions, North Korea has become one of the most challenging U.S. foreign policy issues.

Now, it is difficult to conceive of North Korea relinquishing a nuclear arsenal it has worked for two decades to achieve. But in 1994, long before North Korea tested its first bomb, the North did not have nuclear weapons to give up. Since then, the chance of convincing North Korea to give up its nuclear program has become less likely and more costly.

That history begs the question: What would North Korea look like today had we kept the Agreed Framework and built on it, rather than throwing it away?

Unlike North Korea today, Iran does not possess a single nuclear weapon, only the theoretical capability to one day produce them. By trashing the Iran deal, President Trump risks turning Iran into North Korea.

John Bolton was a central player in withdrawing U.S. support from the North Korea deal in 2002 and from the Iran deal now. History has shown that abandoning the North Korea deal made the problem worse, not better. Similarly, we can expect that the Iran crisis will now get worse, not better, as Tehran resumes its nuclear program and Trump responds with military threats.

Beware John Bolton, serial killer of nuclear agreements. He is shooting us all in the foot.

Philip Yun is Executive Director of Ploughshares Fund, a San Francisco-based peace and security foundation. He was a member of a government working group that managed U.S. policy and negotiations with North Korea under President Clinton and was part of the U.S. delegation that traveled to North Korea with Secretary of State Madeleine Albright in 2000.

Tom Collina is the Director of Policy at Ploughshares Fund. He has over 25 years of Washington, DC experience in nuclear weapons, missile defense and nonproliferation issues.

Catherine Killough is the Roger L. Hale Fellow at Ploughshares Fund, focusing on North Korea’s nuclear and missile development, inter-Korean relations, the US alliance system in East Asia, and the transnational politics of Asia.