The Path to U.S.-Russia Cooperation 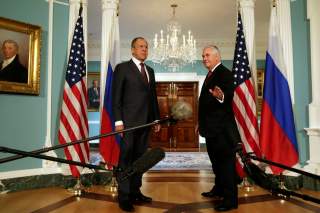 Despite the array of twists and turns since the start of the Trump administration, there is a chance that U.S.-Russia relations could improve over time. My cautious optimism depends on three assumptions.

My first assumption: President Trump continues to remain interested in engagement and cooperation with Russia. He aims to contain and defeat the threat of terrorism, make progress in resolving the conflicts in Syria and Ukraine, and address the challenges of proliferation. The agreement on a limited cease-fire in Syria, reached by Presidents Trump and Putin during the G-20 summit, may keep alive the former’s intentions to improve relations with Russia—an aim he has expressed consistently since the campaign trail—in the face of domestic political costs.

My second assumption: Putin becomes more serious about cooperation with the United States and begins to give clear indications of what he wants—in which areas and on what issues. The lack of specificity from Putin has so far been a key obstacle to progress. When approached by senior U.S. officials, he spent his time complaining about policies under Barack Obama, or about what he considers unjustified U.S. missile strikes in Syria: the Trump administration’s response to the regime’s use of chemical weapons. Putin did not seriously engage on any substantive issues. He even abruptly canceled a scheduled visit to Russia by Tom Shannon, the under secretary of state, which was meant to discuss a range of issues of mutual concern.

It’s possible that Putin was simply not willing to deal with anyone below the head of state. And, indeed, the Hamburg meetings were more productive. The cease-fire agreement in Syria is significant, but it remains to be seen whether Putin has the will or the capability to cooperate on two issues central to the Syria crisis: developing and implementing a plan for Bashar al-Assad and his family to leave the political scene as part of a settlement to end the civil war, and reducing Iranian influence in Syria. On the former, Washington has indicated great flexibility on the modality and timing of an Assad departure from the political scene in Damascus. On the second matter, Putin has been an enabler of increased Iranian influence in Syria, and Tehran now has a significant ground presence there. It would be a big deal for Putin to break with Iran or to significantly push back against its influence now. Doing so would mark a huge step forward; it would represent a meaningful gesture to Washington.

My third assumption: the Trump administration can formulate a balanced and workable Russia strategy in the face of incendiary melodramas, namely the accusations of Russian interference in the presidential elections. This strategy, however unlikely at present, ought to have three sets of twin themes.

Investigate and deter. It is widely believed in the United States that Russia interfered in the 2016 election, stoking anger and deep mistrust. There is also concern about possible collusion between the Russians and the Trump campaign. Thoroughly investigating this is a good thing. Hopefully, it will provide clarity and help U.S. policymakers understand Russian tactics and capabilities, which will enable them to strengthen safeguards and ensure this never happens again.

Establish a regional balance of power, and compete. Although a declining power in economic terms, Russia has followed aggressive policies in several regions. Putin has had a hard time coping with Russia’s decline. For the United States, managing Russian decline requires pursuing a balance-of-power approach to minimize the risk of escalation. Washington must encourage democratic reforms without besmirching Russia’s pride or great-power image. The Trump administration is right to build up U.S. defenses and to push the Europeans, who collectively have a much bigger economy than Russia, to do more for their own defense.

Negotiate and cooperate. Washington should be sensitive to Russian interests and explore the areas in which both sides can benefit from improved relations. These issues might include: dealing with terrorism; containing the proliferation of weapons of mass destruction, missiles and cyber technology; bolstering the effectiveness of the United Nations by developing a common stance on key challenges and avoiding the gridlock of a Security Council veto; and partnering to end civil wars and regional disputes. Putin’s recent record has not been encouraging, but this can change.

In 1983, as the Reagan administration was rebuilding America’s military capability and responding to Soviet aggression in, among other places, Afghanistan, the White House initiated a process for possible negotiations with Moscow. It took several years, but those efforts ultimately bore fruit. The Trump administration should embrace a similar approach.

Zalmay Khalilzad is a counselor at the Center for Strategic and International Studies. He was the director of policy planning in the Department of Defense and the U.S. ambassador to Afghanistan, Iraq and the UN. He is the author of The Envoy: From Kabul to the White House: My Journey through a Turbulent World.

Image: U.S. Secretary of State Rex Tillerson (R) waves to the media next to Russian Foreign Minister Sergey Lavrov before their meeting at the State Department in Washington, U.S., May 10, 2017. REUTERS/Yuri Gripas