Is the Pentagon Headed for a Military Readiness Crisis? 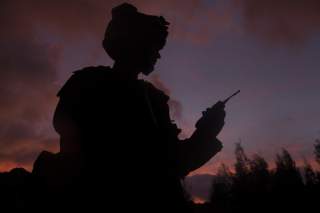 Washington is abuzz with talk that the U.S. military is increasingly hollow, and that its readiness is in crisis. American military readiness, defined as the ability of individual units in the armed forces to execute their assigned missions promptly and competently, is indeed uneven today, with some serious problems. A Department of Defense that downsized by more than a third after the Cold War ended, then spent fifteen years at war, and most recently also endured the budgetary shenanigans of sequestration and recurrent continuing resolutions, has indeed been through a lot. All would agree that the United States has asked a great deal of its soldiers, sailors, Marines, airmen, airwomen and their families, as well as the U.S. Coast Guard over in the Department of Homeland Security.

But some of the current talk goes dangerously too far. If believed literally, then it could embolden U.S. enemies, suck resources that are also needed for military innovation and modernization to fix short-term readiness problems, and make taxpayers wonder why the Pentagon can’t manage its forces better on $600 billion a year (well above the Cold War average). Just as bad—or worse—it could convince lawmakers to fund a big defense buildup by cutting the State Department, Agency for International Development, and other equally crucial parts of the country’s foreign-policy toolkit, as President Trump has proposed. That would hurt diplomacy and development far more than it would help the armed forces, given the proportionate amounts of money involved for each in any such reallocation.

In his masterful 2012 Brookings book on Military Readiness, Columbia University Professor Richard Betts entitled one chapter, “Lies, Damned Lies, and Readiness Statistics.” We need to be careful about cherry-picking data to serve a predetermined narrative. This often happens in readiness debates. For example, in the late 1990s, the Army declared two of its ten divisions “unready” because each had one of its three brigades deployed on operations in the Balkans that the president and Congress had approved. To my mind, the divisions were proving their readiness for a real national-security mission, not somehow squandering or sacrificing it. But the Army classified the data, and it was only leaked when it served someone’s particular agenda. In the early 1980s, an Air Force bomber squadron took delivery of several brand-new B-1 bombers one calendar year. But instead of scoring that as an improvement, official Air Force statistics said that the unit in effect went from a “B” to an “F” in readiness over the course of that year. The reason was that it was supposed to have received a dozen B-1s that year, to replace the B-52s that had been in its inventory, but instead only got half the expected number. Its actual capabilities improved dramatically, but it fell short of what plans had augured, so it was severely downgraded in the official readiness statistics.

I do not mean to suggest that the readiness horror stories we are hearing today are made up. They are real—as real as the tragic accidents of the USS McCain and USS Fitzgerald this year, as real as the deployments of our men and women in uniform that often last weeks longer than they should, as real as several types of military helicopter fleets, which reportedly have only about half their aircraft flying right now. We do, in fact, need to fix these problems; modestly, more money is indeed needed for fuel, ammunition, equipment repair, training and a somewhat larger military force structure. We also need to get away from stopgap funding measures known as a “continuing resolutions” like the one we have right now. Continuing resolutions prevent the Department of Defense from entering multiyear contracts that can save the taxpayer money; they also impede innovation. Also, they disrupt training and hiring, by leaving planners unsure of what will happen financially once temporary budget measures expire.

As best I can tell from my research, the current state of U.S. military readiness is roughly as follows. This is admittedly an imperfect and imprecise summary of the situation, because for the last fifteen years the armed services has been classifying information that should, in my judgment, be public, complicating any effort to measure and assess readiness. But the situation appears roughly as follows:

Taken together, I would evaluate today’s overall readiness, averaged across multiple categories, as something between a B and a B+, with some pockets of lower grades but also numerous units that are simply in outstanding shape, largely because their people are so good, if often tired.

Still, we need to improve readiness, and make the lives of our people in uniform somewhat easier, without expecting that new streams of money will easily fix the problem. Pentagon leaders need to find new ways to manage the force more efficiently in preparation for the news that additional defense dollars will not be forthcoming. Fortunately, numerous ideas and options are available to them.

Start with the Navy, which has suffered the most tragic episodes reflecting questionable readiness of late. Instead of maintaining continuous presence with multiple ships in the Western Pacific and the Persian Gulf regions at all times, it can scale back the size of some of those deployments. It can also substitute amphibious ships for large-deck carriers in some more benign operations. Also, it can even allow periodic gaps in presence in some cases, unless a theater is feared to be actively on the cusp of conflict.

The Navy can also use “crew swaps” more often. Rather than keep a single crew with a single ship, it can have sailors train as a team on one vessel in home waters, then fly to meet up with another ship already deployed abroad, relieving another crew there. Ships can stay overseas for a couple years at a time, while sailors rotate every six months or so. The Navy already uses multiple crews for some types of submarines and minesweepers; it would be harder, but probably only modestly harder, to employ this practice for cruisers and destroyers.

The Navy can also look to the Air Force for some help. The military could station more of its land-based combat aircraft in the Persian Gulf region in countries like Kuwait, Oman, the United Arab Emirates, Qatar and perhaps Bahrain. It rotates fighters through some of these places today but does not maintain a consistent, steady presence like it could. (As best I can tell, the Air Force units that are most overused today are not fighters so much as transport and tanker planes, so I believe the Air Force has some capacity to consider this idea.)

Then there is the U.S. Army. Today it has the equivalent of less than five brigades at a time on overseas deployment, only a third of typical levels during the 2000s. Yet many consider its current deployments to be unsustainably demanding. If that really is the case, then it could perhaps permanently base one brigade of combat forces in Korea and another in Poland, rather than maintain its current presence in these countries with unit rotations, as is done today. Today’s rotational approach is inefficient. It preoccupies at least three units for every one that is deployed, since at any moment one brigade will be forward, another will be preparing to deploy, and a third will be recovering from a recent rotation abroad. Basing forces abroad is much less demanding on the overall force structure, for any given level of overseas presence, and Poland and South Korea are perfectly reasonable places to live these days, including for military families.

A final idea is to reduce the permanent presence of Marine Corps forces on Okinawa (where they number some fifteen thousand today, most on temporary deployment). This could be done without weakening U.S. capabilities in the crucial Asia-Pacific region, if Japan would help by providing more space in some of its ports for U.S. Navy prepositioning ships. Stationing more such ships in Japan, to complement those already in Guam, would allow Marines to quickly fly from California and marry with prestationed equipment in a crisis.