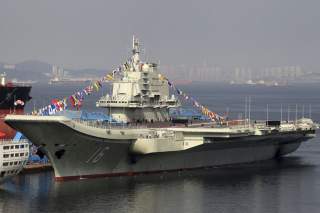 Friday’s Department of Defense (DoD) report to Congress on Chinese military and security developments is the last issued under the Obama Administration. Amid geopolitical uncertainty, it was a respectable final contribution. Nevertheless, it suffers from an unfortunate shortcoming. The Pentagon report rightly highlighted growing concern about Beijing’s mounting maritime coercion, but passed up a rare chance to connect it with a potent player flouting the rules of the game. China’s Maritime Militia, the irregular frontline sea force of “Little Blue Men” trolling for territorial claims, receives nary a mention. Like a trident with only one full-fledged prong, a report covering only one of China’s three major sea forces in depth—and ignoring one entirely—remains regrettably incomplete.

“China is using coercive tactics...to advance their interests in ways that are calculated to fall below the threshold of provoking conflict,” DoD’s report rightly emphasizes. Asked to elaborate on such “Gray Zone” operations in yesterday afternoon’s roll-out event at the Pentagon, Deputy Assistant Secretary of defense for East Asia Abraham M. Denmark stated that China’s coast guard and fishing vessels sometimes act in an “unprofessional” manner “in the vicinity of the military forces or fishing vessels of other countries in a way that’s designed to attempt to establish a degree of control around disputed features.” “These activities are designed to stay below the threshold of conflict,” Denmark explained, “but gradually demonstrate and assert claims that other countries dispute.”

A key official thus encapsulated one of the most important, complex security challenges facing his government and a vital region whose peacefulness and openness it underwrites. The problem: his administration’s final iteration of the report offering unparalleled authoritative public insights on Chinese security developments missed a chance to cut to the heart of the problem by addressing China’s Maritime Militia and the concept of People’s War at Sea that inspires its development.

None of this should overshadow the report’s many welcome contributions. At a hefty 145 pages, it is highly informative and will repay whatever time you can devote to it. Through detailed text, maps, and figures, it documents a rapidly developing Chinese military, commanded by leaders inspired by ambitious national goals, in the throes of the most sweeping reforms in three decades or more. In doing so, it outlines broad dimensions of strategy, organization, leadership, and events that are largely available in open source scholarship—sometimes richer, more nuanced, and more comprehensive—but rarely in one place and almost never with a leading government’s analytical seal of approval.

Those seeking a reasonable overview of Chinese military efforts need look no further than paragraph one. “Chinese leaders have characterized modernization of the People’s Liberation Army (PLA) as essential to achieving great power status and what Chinese President Xi Jinping calls the ‘China Dream’ of national rejuvenation. They portray a strong military as critical to advancing Chinese interests, preventing other countries from taking steps that would damage those interests, and ensuring that China can defend itself and its sovereignty claims.” Thus motivated, “The long-term, comprehensive modernization of the armed forces of the People’s Republic of China (PRC) entered a new phase in 2015 as China unveiled sweeping organizational reforms to overhaul the entire military structure. These reforms aim to strengthen the Chinese Communist Party’s (CCP) control over the military, enhance the PLA’s ability to conduct joint operations, and improve its ability to fight short-duration, high-intensity regional conflicts at greater distances from the Chinese mainland.” Beijing continues to put its money where its mouth is, with China’s defense budget indisputably the world’s second largest. While acknowledging the challenges inherent in such a calculation, the Pentagon estimates Beijing’s total military-related spending in 2015 at over $180 billion. Exercises of increasing scale, jointness, complexity, and realism are part of an effort to make China’s military far more than the sum of its unevenly growing parts.

There is, as well, the obligatory government messaging. Thus readers are assured that: “While the United States builds a stronger military-to-military relationship with China, DoD will also continue to monitor and adapt to China’s evolving military strategy, doctrine, and force development, and encourage China to be more transparent about its military modernization program.” Like other public U.S. government reports, this one reveals few details of Chinese computer network operations. Nevertheless, some cyber activities directed against its sponsoring institution in 2015 “appear to be attributable directly to China’s government and military.” Clearly, the Pentagon is not amused.

As has been the case since its first iteration in 2002, however, the report’s greatest contribution lies in its provision of technical weapons specifications and other data often otherwise unavailable in publicly authoritative form.

Concerning recent developments in the South China Sea, the report makes a robust contribution, offering unprecedented information in user-friendly text and graphics. Beijing’s eight outposts on the seven Spratly features it occupies are detailed in pages splashed with size comparison schematics, photos and statistics before and after augmentation and fortification, and facilities diagrams.

In two years through late 2015, China added more than 3,200 acres to the aforementioned Spratly features, against the 50 acres reclaimed by the other occupants combined. Among other activities, “China excavated deep channels to improve access to its outposts, created artificial harbors, dredged natural harbors, and constructed new berthing areas to allow access for larger ships,” the report notes. “Development of the initial four features—all of which were reclaimed in 2014—has progressed to the final stages of primary infrastructure construction, and includes communication and surveillance systems, as well as logistical support facilities.” Perhaps most importantly, “China’s four South China Sea airfields ultimately “could have runways long enough to support any aircraft in China’s inventory.”

While the report ignores China’s Maritime Militia (and its even-larger land-based counterpart), it offers several important points concerning Beijing’s other major “Gray Zone” force: the China Coast Guard (CCG). This agency has acquired “more than 100” new, improved, longer-range “ocean-going patrol ships.” Already the world’s largest blue water civil maritime force, “the CCG’s total force level is expected to increase by 25 percent.” A growing proportion of its ships will be able to embark helicopters, currently a rarity in the force. In the coming decade, the CCG will have greater ability to patrol and enforce China’s claims in the Near Seas (the Yellow Sea; and especially the East and South China Seas). The Pentagon offers no details behind these important bullet points, however; for that, you’ll have to consult the extensive scholarship of my China Maritime Studies Institute colleague Ryan Martinson.

Buoyed by a building binge, “The PLAN now possesses the largest number of vessels in Asia, with more than 300 surface ships, submarines, amphibious ships, and patrol craft.” Quality is improving even faster than quantity, with older vessels swapped for “larger, multi-mission ships equipped with advanced anti-ship, anti-air, and anti-submarine weapons and sensors.” As part of this trend toward bigger, better ships, DoD states that China has likely “begun construction of a larger Type 055 ‘destroyer’,” properly considered a heavy “guided-missile cruiser.”

Submarine force modernization remains a leading priority. By 2020, China is forecast to have “between 69 and 78 submarines.” The Pentagon deems that four Jin-class nuclear-powered ballistic missile submarines (SSBNs) are already “operational,” without explaining what that means in practice. It projects that during the next decade “up to five may enter service before China begins developing and fielding its next-generation SSBN, the Type 096,” bearing the follow-on JL-3 submarine-launched ballistic missile (SLBM). Also within this timeframe, “China may construct a new Type 095 nuclear-powered, guided-missile attack submarine (SSGN), which not only would improve the PLAN’s anti-surface warfare capability but might also provide it with a more clandestine land-attack option.” As for nuclear-powered attack submarines (SSNs), “four additional SHANG-class SSN (Type 093) will eventually join the two already in service.”

In keeping with an enduring focus on anti-surface warfare (ASUW),” China is modernizing its anti-ship cruise missiles (ASCMs) and their over-the-horizon targeting. In a widespread example of China improving on Russian systems that it accesses, digests, and emulates, its “newest indigenous submarine-launched ASCM, the YJ-18 and its variants” will be deployed on Song- and Yuan-class conventional submarines as well as Shang-class SSNs.

Not to be eclipsed by the PLAN, the PLA Air Force (PLAAF) “is the largest air force in Asia and the third largest in the world, with more than 2,800 total aircraft (not including UAVs) and 2,100 combat aircraft (including fighters, bombers, fighter-attack and attack aircraft).” As with the PLAN, improvements in quality are prioritized over quantity. China’s air force is replacing old platforms with new ones, thereby “rapidly closing the gap” vis-à-vis Western counterparts “across a broad spectrum of capabilities from aircraft and command-and-control (C2) to jammers, electronic warfare (EW), and datalinks.”

As “the only country other than the United States to have two concurrent stealth fighter programs,” China is developing “fifth-generation aircraft, which could enter service as early as 2018.” DoD believes this will “significantly improve China’s existing fleet of fourth-generation aircraft.”