The Pentagon's Greatest Challenge (And It's Not ISIS or China) 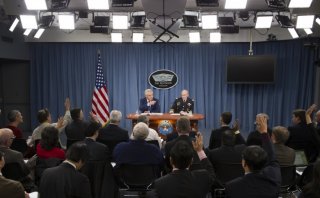 Before the arms race with the Soviet Union came the hiring race among U.S. military bureaucracies.

It started not long after the National Security Act of 1947 established what became the Department of Defense (DoD). The Secretariat added staff and functions to ride roughshod over the services. In turn, the services added staff to meet all the department’s demands, as well as defend its own prerogatives. The cycle of adding staffs has never stopped. Even as defense downsizes, the massive oversight at the top stubbornly holds on. Despite numerous recommendations and attempts to tame the Pentagon bureaucracy—it remains largely unscathed. It is past time for serious strategy that rightsizes and realigns all the people telling the armed forces what to do and how to do it.

Washington, like nature, abhors a vacuum. Build an office building three times bigger than the Empire State Building, and you’re bound to run out of room. Today, staffers working for the defense department, the Joint Staff, the staffs of the military services and the supporting agencies spill over from the Pentagon to fill offices throughout the DC metropolitan area and beyond. There are about 800,000 defense civilian employees—about half as many men and women as there are wearing on active duty (i.e. not counting National Guard and Reserve military personnel).

Every time the Pentagon promises to rightsize the staff, it looks mostly like an effort to reshape a balloon. For example, in 2010, Secretary of Defense Bob Gates announced with great fanfare plans to shutter the Joint Forces Command in Norfolk, Virginia as a “budget saving” measure. But after that decision, the size of the Joint Staff in Washington, DC more than doubled. According to an investigation by Defense News, “[b]etween 2010 and 2012, OSD [Office of the Secretary of Defense], the Joint Staff and COCOMs [Combatant Commands] added about 4,500 positions…[m]ore than 65 percent of the staff size growth was within the Joint Staff….”

After taking office, Gates’ successor, Chuck Hagel, announced his intention to cut the bureaucracy by at least 20 percent. That hasn’t happened yet.

The Pentagon’s failure to rightsize is especially frustrating. Paying for all these paper-pushers while shedding military capabilities like troops, planes and ships aside—excessive bureaucracy slows the capacity of the services to respond.

Clarion calls to take on this challenge are common. For instance, former Navy secretary John Lehman in the Wall Street Journal called for stopping “our unilateral disarmament by making deep cuts in bureaucratic overhead throughout the Pentagon, uniformed and civilian.”

But the Pentagon needs more than rallying rhetoric. It needs a plan that just might work. Here is one such plan that is based on some pretty solid lessons learned from an effort tried by the British Ministry of Defence in 2010.

Lay out the Defense Department’s top priorities—the strategic capabilities and efficiencies that are most important. Far more efficient management of the department’s vast infrastructure, for example, ought to be on the list. Tap an independent review board to make recommendations on rightsizing staffs and functions. Give them a short deadline to deliver their recommendations. Tell them to work with existing budgets and statutory guidelines. Plus, don’t firewall them from the secretary, the services and the Congress. On the contrary, tell them to make engagement and transparency a priority.

At the same time, set up a transition strike force within the DoD and service staffs. The task: be prepared to help mobilize the department to make personnel adjustments as efficiently as possible. This would send a powerful message to Congress and the military workforce that taking care of people is and will remain a priority throughout the process. Assign someone in the department responsibility for making the strike force a real force for human capital management—not just more bureaucracy.

Hire the right people to run the Pentagon. Pair service chiefs and secretaries that can work as a team. Make sure the service secretaries are a “band of brothers and sisters” who will pull together as a team—leaders who share trust and confidence in one another. Make sure key principle political appointees in the DoD secretariat are competent in defense-management matters. In part, that will mean having practical, responsible ethics rules in place that will encourage good people to serve, rather than making public service an intolerable burden. Having the right ethics guidelines is one thing. Getting Congress to go along with them is another. The administration must have the support of key Congressional leadership. At the same time, get the Joint Staff under control. The Joint Staff has an important role to play in defense matters, but second-guessing everything the Pentagon does is not one of them. The Vice Chairman of the Joint Chiefs of Staff, for example, doesn’t have to have a say in everything the defense department does. The Joint Requirements Council does too much—not too little.

Turn the task of reshaping the staff over to the services and key leaders in the secretariat. Take the results of the report from the independent review board. Give them goals and deadlines. Don’t make it a zero-sum game; fight to turn back to them the resources that are saved to build up capability and capacity. In implementing the plan, make sure leadership works hand-in-hand with the transition strike force to assure that people who are downsized are taken care of.

Push for a budget amendment to reprogram funds to take advantage of restructuring and rightsizing.

This process just might work. It is not salami slicing—trimming a little bit of something to have less of everything. It is not arbitrary cuts or just a budget drill. It is a strategic, focused effort to match defense manpower to the defense mission. It is also not uncaring. It bakes in taking care of people and respecting the interests and equities of all the parts of the department, using an open and fair process to provide for the common defense.

Another advantageous feature: while this plan requires respecting and engaging with the Congress, it doesn’t demand a huge legislative lift from Capitol Hill—just a committed administration.

Finally, these steps are a great way to get the defense-reform agenda rolling. If well executed, they could keep the defense department leadership busy for two years. Meanwhile, the secretary can get started setting the stage for other key reforms in areas like defense acquisition.