The Pentagon’s Loopholes: Big Enough to Fly A Bomber Through 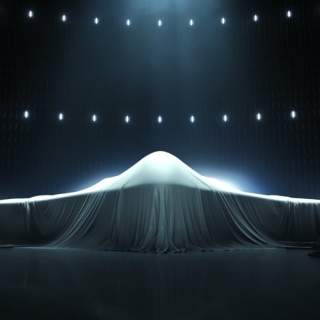 Earlier this month, Northrop Grumman won the massive contract for the next-generation bomber aircraft, the Long Range Strike Bomber (LRS-B). The program will cost an estimated $100 billion to acquire, and an additional $100 billion for operations and support; but if previous air force programs are any indicator, that number will only go up.

The bomber, which will have both nuclear and conventional missions, is a part of the current plans to modernize all three legs of the U.S. nuclear triad over the next thirty years, an undertaking that could cost upwards of $1 trillion. With large spending projects on the horizon, the contract award for the bomber sets up a sobering reality check for the Pentagon: that money is going to have to come from somewhere.

The Navy Sets a Precedent

One option is to divvy up the bill, paying for all or part of the program from a pot of money apart from the normal budget. Congress is currently working to create a loophole to pay for the navy’s leg of the nuclear triad, its submarines, outside of its standard budget: the so-called National Sea-Based Deterrence Fund, a scheme set up by Congress to fund the Ohio-class replacement subs.

Lawmakers argued that because the new submarines are a “national asset,” they shouldn’t have to be funded using the navy’s regular shipbuilding money. It will take nearly $100 billion just to procure the Ohio-class ballistic missile submarine program, and the Sea-Based Deterrence Fund would, in theory, allow the navy to pay for the subs through this off-budget account while funding its other projects through its regular budget.

Although lawmakers have never actually appropriated money for the account, the FY 2016 defense authorization bill expands transfer authority for the account, and even authorizes the transfer of $1.39 billion for it. By deferring fiscal responsibility for the new nuclear subs from the navy to the entire defense budget, the navy gets to avoid making tough choices on what programs to prioritize.

With such a precedent set, what is keeping the air force from getting its own special, off-budget account for the bomber it also can’t afford?

In fact, some policy makers are indeed eyeing the special submarine fund as a model for a potential way to bankroll the new bomber. In January 2015, Lt. Gen. Stephen Wilson, Commander of Global Strike Command, said, “We’re looking to see how we can do something like that” in response to a potential Air Force version of the Sea-Based Deterrence fund.

The Origins of Loophole Budgeting

The inspiration for these accounts was likely the Overseas Contingency Operations account (OCO), the most egregious loophole in the federal budgetary process. Unlike the Pentagon base budget and all discretionary non-defense spending, OCO is not subject to the budget caps imposed by the 2011 Budget Control Act. Consequently, OCO is used by all branches of the military as a slush fund to pay for projects that it can’t afford out of the base budget.

President George W. Bush established an emergency war funding mechanism after 9/11 to pay for the wars in Iraq and Afghanistan because it was easier than planning for war spending within the base budget.

But Bush stretched the definition of “emergency” and used the supplemental account longer than he should have. The account has since expanded from a war fund to a true Pentagon slush fund, adding, for instance, funding for the F-15 aircraft program when none of these planes have been shot down in Afghanistan or Iraq.

President Obama tried to change this by creating the Overseas Contingency Operations account, and restrict what does and does not count as eligible for OCO. But the rules about “hat counts and what doesn’t quickly slackened.

To take an example from budget expert Gordon Adams, “OCO is spending $200 to $300 million on fixing propellers on nuclear submarines. That couldn’t possibly be related to Afghanistan. The last I saw, it was a landlocked country.” Although the Pentagon certainly treats OCO like play money, as soon as it’s appropriated, the bill is paid for using real American taxpayer dollars.

In practice, these accounts would do nothing to improve the affordability of a given program. Unlike OCO, the Sea-Based Deterrence fund is subject to the 2011 budget caps, and any money transferred into it must be taken out of other programs within the defense budget. The same would be true for an “Air-Based Deterrence” account for the new bomber.

The Pentagon base budget is zero-sum. If the Navy doesn’t foot the bill for its submarines, or the Air Force for its new bomber, that money is still going to have to come from elsewhere within the defense budget. Skirting responsibility for the cost of a weapons system is admitting that it is not affordable. If it were, these budget gimmicks wouldn’t be on the table at all.

Budget gimmickry like this is an attempt to continue our all-of-the-above strategy to national defense. This off-budget disease needs to stop, and be reversed, before it spreads.

Sarah Tully is a Policy Analyst at the Center for Arms Control and Non-Proliferation and Council for a Livable World. Her work focuses on the Pentagon budget and nuclear security.