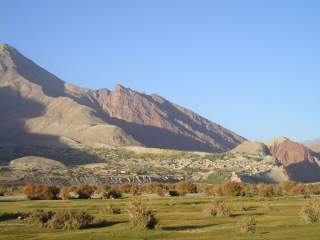 The settlement in the shadows of the mighty peaks and cliffs of the Hindu Kush in Afghanistan’s northeastern province of Badakhshan is mostly deserted. The small stone huts are crumbling, and the plastic fabrics of makeshift awnings are torn to rags. But, belying the desolate appearance of the settlement, the rocky slopes just above the encampment hold one of Afghanistan’s treasures—the world-famous mines of lapis lazuli, a semiprecious stone, that has been extracted for millennia for its mesmerizing deep blue color.

These mines, among others of Afghanistan’s natural resources, are often deemed to be the country’s way out of dependence on international aid. However, the reality at the mines shows that Afghanistan’s lapis lazuli wealth is trapped in a deadlock of political intrigues, rather than the harbinger of a brighter future—and this is only one example of the general problem of complicated political power struggles paralyzing Afghanistan’s development.

The latest and current troubles surrounding the lapis lazuli started in January 2014, when an irregular armed group—neither being with the Taliban nor the government—took over the mines in the district of Kuran Wa Munjan from some kind of semi-official government control. In reaction, the Afghan government has incrementally clamped down on what it sees as illegal mining and trade in the blue treasure, interdicting its transport on the routes outside Kuran Wa Munjan (though there is a nominal police station there, the government has no effective presence in the district, which is controlled by the aforementioned armed group). While small amounts of lapis lazuli are still mined and smuggled through the blockade, mining and trading came to a virtual standstill sometime in the first half of 2016, according to the few miners and merchants that were left there in October 2016. Since then, seemingly no one has profited from the stones. And, more worrisome, there appears to be no solution in sight.

Officially, Afghanistan’s Ministry of Mines and Petroleum states that, as long as security is not provided around the lapis lazuli mines, it is unable to coordinate the necessary steps for state-regulated legal extraction. Accordingly, it refers to the Ministry of Interior Affairs, which is responsible for the Afghan National Police and, hence, security. Despite several efforts, no comment could be obtained from the Ministry of Interior Affairs.

Notwithstanding this lack of official information, the government apparently planned and still plans to bring the mines back under its control by re-creating a special mine protection force. The intended unit, that had in some form already existed before the takeover in 2014, would be under the aegis of the Afghan Public Protection Force, a state-owned security service that protects infrastructure, facilities and construction projects, and is subordinated to the Ministry of Interior Affairs. But this plan is murky, and apparently subject to meddling from political and personal disputes.

At the end of September 2016, different sources, among them a member of national parliament and an official from the province of Badakhshan, confirmed that Haji Abdul Malik, the purported leader of the irregular armed group in Kuran Wa Munjan, had been appointed as commander of the mine protection force. But only days later, the Ministry of Interior Affairs backtracked on what would have been a very controversial choice, stating that Malik has only been nominated as commander for the unit, but that no final decision has been taken yet. What exactly caused this seesaw remains unclear, and there is also no information available on what the current status of the intended mine protection force and the appointment of its commander is. However, it appears that political and personal intrigues simmering under the surface interfere with and hamper any decision regarding the lapis lazuli mines, including the plan for a mine protection force.

For the miners and merchants at the mines, the situation is quite simple—they all blame the government, or rather persons within the government, for wanting to regain control of the lapis lazuli mines to enrich themselves and shut them out. Their wrath is often directed at President Ashraf Ghani, and at Zalmai Khan Mujadidi, a member of national parliament who is said to have controlled the mines before.

While such a view is oversimplified, the problem does seem to be antagonism between Malik and Zalmai Khan and their respective supporters. Sitting in his large but rustic guesthouse in Iskazer, the effective center of Kuran Wa Munjan, not far from the mines, Malik insists that Zalmai Khan instigated a conspiracy and is manipulating powerful figures in government, such as National Security Advisor Hanif Atmar and even President Ashraf Ghani himself, to again take control over the mines. If successful, Zalmai Khan would bereave not only the local people, but also the central government, of the valuable lapis lazuli, claimed Malik, asserting that Zalmai Khan takes everything for himself without paying taxes or royalties.

Zalmai Khan rejected all those allegations in an interview conducted in the Afghan capital Kabul. In particular, he denied having any – past or present – hand or share in the lapis lazuli mines and assured that the extraction before the coup in 2014 had been legal and state-regulated without interference from himself. Contradicting this, various sources nonetheless persist that Zalmai Khan had been the grey eminence behind the exploitation of the lapis lazuli mines before the local armed group seized them in January 2014. Those sources also indicate that, although the government had at that time received some taxes and royalties, it was far less than it should had been. However, none of this could be verified.

Be that as it may, Zalmai Khan also staunchly rejected that he is plotting against Malik to take over the mines and repeatedly underscored that there is no hostility towards Malik from his side (something that cannot be said vice-versa). Despite this, Zalmai Khan claimed that Malik had conspired with the Taliban and high-ranking (former) government officials to seize the mines and sees all accusations against him as political intrigues launched by Malik and his supporters within the government to deflect from the real problem, which is the current status under Malik.

In this regard, not only Zulmai Khan, but also various other sources, accuse Malik and his group of illegally extracting lapis lazuli for their own personal profit at the cost of the public good and the state. Some accounts even suggest that Malik pays off the Taliban in order to safeguard his control of the mines. Unsurprisingly, Malik rejects all such accusations, insisting that he is “merely standing on the side of the people” who were forced to take their right into their own hands and act against Zalmai Khan’s previous, allegedly kleptocratic regime. Accordingly, Malik freely acknowledges that the lapis lazuli mines are “the property of the state, the property of the people . . . and that the government has a right [to get its share].” However, he then fails to satisfyingly explain why there is no state-approved and taxed extraction in the mines, and falls back to tirades, accusing Zalmai Khan of having hijacked government policy and blocking any fair solution with respect to the mines.

Given the hardening fronts on each side, different political circles either push for Malik, seeing him as a power broker with local support and the actual influence to control the mines, or try to oust him, deeming him a crook who only enriches himself and his associates, not flinching to pay off the Taliban to this end. While some of Malik’s opponents may have their own (possibly illegitimate) personal interests in mind, it should be noted that some may simply consider Malik unsuitable for any position connected with the mines; given his past, after all, it could be argued that this amounts to letting the fox guard the hen house.

Be that as it may, in a seeming attempt to leave the past behind, Zalmai Khan stated that he rallies for the deployment of a new mine protection force with a neutral commander that is neither connected to him nor to Malik. Such a fresh start with new blood hardly seems feasible, though, as Malik — suspicious of any outside interference — insists that the mine protection force commander “has to be someone from among the people of Kuran Wa Munjan, someone who defends his own home and turf,” which in practice means himself or someone connected to him. And as long as the government is virtually nonexistent in Kuran Wa Munjan, it is in no position to force a solution on Malik.

Further complicating things is the alleged involvement of nationally influential figures, taking the disputes between Malik and Zalmai Khan from a local to a national level. While Malik claims that circles around the president are backing Zalmai Khan, other accounts indicate that Malik is aligned with former high-ranking government officials from the province of Panjshir, such as Bismillah Khan Mohammadi, a former defense minister, rumored to have stakes in the unregulated lapis lazuli trade. Malik, as well as Zalmai Khan, reject such accusations. Neither could be verified. What can be said though is that some officials from the camp of Chief Executive Abdullah Abdullah, that includes many Panjshiris, are apparently lobbying for Malik, as one source at the beginning of November confirmed confidential backdoor talks between such people and the interior minister regarding the mines.