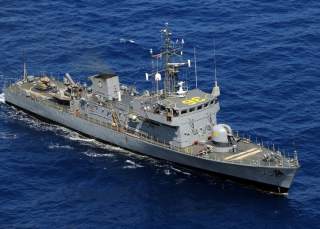 The Filipinos are justifiably proud of their spanking new Indonesian-built landing platform dock, BRP Tarlac, which was commissioned last week with much fanfare. Indeed, the ship is the first brand-new warship for the Philippine Navy, long judged to be the weakest of all Southeast Asian navies, in roughly two decades.

The navy has, in recent years, been experiencing a sort of renaissance under the outgoing president, Benigno Aquino III. The question is whether president-elect Rodrigo Duterte can sustain momentum in the navy’s modernization efforts. This depends on Manila’s ability to bankroll new acquisitions and political commitment. The previous administrations could offer useful lessons.

Not long after American forces withdrew from Philippine bases, the first major Sino-Philippine South China Sea incident erupted over Mischief Reef, after Chinese forces were first spotted occupying it in 1995. Fidel Ramos rallied for naval modernization. “The Navy must be given priority over all the other services because we have nothing but. . . maritime borders around the Philippines," he boldly remarked in January 1996.

Compounding the situation, the Philippine Senate slashed the proposed fifteen-year military modernization budget from 330 billion pesos to a mere 170 billion pesos, of which about 69 billion was allocated to the navy. Even when tensions reemerged over Mischief Reef in 1998, Manila conceded that the ballooning budget deficit amid the Asian financial crisis meant “no big toys” for the military. Ramos presided over the navy’s sole major purchase: three ex-British Peacock-class patrol vessels.

Little wonder that there was a foreboding sense of gloom in the Philippines. Back in August 1998, responding to questions about whether there was sufficient military capability to expel foreign intruders, Foreign Affairs Secretary Domingo Siazon, Jr. remarked: “Turn them away with what?” Others expressed similar concerns and yearned for concrete actions. “This state of technical blindness has begun to affect the morale of our air and naval forces, not to mention the confidence of our civilian government agencies in charge of looking after our marine and other resources within our territorial waters,” proclaimed Senate Resolution No. 639, undersigned unequivocally by all twenty-two senators in December 1999.

Estrada: Quagmire Down South Trips Up the Navy

While supporting internal security operations, the navy continued to endure shortages. Estrada shrugged off internal concerns about its operational state, insisting that high-tech armaments “do not themselves guarantee security.” Indeed, there were no major navy purchases under Estrada’s watch. Plans for nineteen new warships, later downsized to a priority purchase of just three offshore patrol vessels, failed to materialize.

Initially, Gloria Macapagal Arroyo tried to rectify the navy’s malaise; she restarted the Moro peace process in 2001. But soon after, clashes erupted between government forces and the rebels. The peace process was stymied after the Supreme Court ruled as unconstitutional the Memorandum of Agreement on the Muslim Ancestral Domain, which envisaged a referendum in Mindanao to determine the creation of the “Bangsamoro Juridical Entity,” an associated state contingent on constitutional amendments.

The navy was enlisted to focus on supporting ground operations against the rebels. It was in a deplorable state to safeguard the Philippines’ rights in the South China Sea. Describing the Navy as “practically non-existent,” Prospero Pichay, head of the House of Representatives defense committee, lamented in March 2003 that only 56 percent of its 114 vessels were operational. To stabilize the internal security front, Arroyo preferred conciliation with Beijing, the Joint Marine Seismic Undertaking with China, in 2004, being her controversial legacy.

As such, the navy found itself hard-pressed for funding. A total of 15 billion pesos was allocated under the Defense Reform Program 2005–2010, but mostly intended to support internal security operations. The navy had to content itself with the dregs of funding: only one ex-American and two ex-South Korean patrol craft constituted its major purchases during Arroyo’s term.

Even daily upkeep was a persistent challenge. In 2009, Philippine Navy sources once complained to me about the pathetic state of affairs: meticulously polished Peacocks—the most modern and capable warships of the entire fleet—that impressed guests at public displays but sadly lacked even ammunition for the 76-millimeter main gun, which is the largest weapon for a navy that has no missile armament, an oddity in this hi-tech age of naval warfare.

Aquino: New Hope for the Navy

The navy finally got its break under Aquino, who demonstrated that economic and internal security concerns do not stand in the way. Average annual gross domestic product growth under Ramos, Estrada, Arroyo and Aquino was 3.14, 3.75, 4.78 and 5.87 percent, respectively. The navy did not have the opportunity to ride this steady economic growth prior to Aquino.

Political will in pursuing the peace process thereby allowed Aquino to implement serious moves towards realizing the navy’s Strategic Sail Plan 2020. Most critically, the fleet’s ability to operate in the distant South China Sea reaches was enabled by a pair of ex–U.S. Coast Guard high-endurance cutters.

Also notably, besides getting “hand-me-down” equipment via Washington’s excess defense articles program, the navy began to acquire brand-new equipment elsewhere: AgustaWestland-109E light helicopters. The first of two Strategic Support Vessels, BRP Tarlac, kept up the unprecedented momentum, even if modest in scale. Nonetheless, for the first time the navy would become a real three-dimensional service once the pair of Indian-built missile frigates arrive, meant to operate with new AgustaWestland-159 Wildcat antisubmarine helicopters.

The Navy’s Future Under Duterte?

Can the Duterte administration sustain the navy’s reinvigorating momentum? The Philippines is expected to post a GDP growth of 6 percent in 2016, thereby providing potentially positive conditions for the navy’s modernization efforts.

But on the other hand the Moro peace process, if not managed properly, could well derail those efforts. It appears that this may be hanging in the balance. It does not help that the earlier Mamasapano clash in January 2015 had soured public opinion towards BBL, which has yet to be passed in the Philippine Congress. Moreover, Duterte is reportedly keen to establish a federal government system. And Senator Alan Peter Cayetano, running mate of Duterte for this election, was also one of the leading skeptics of BBL. After newly elected Davao del Norte Rep. Pantaleon Alvarez, who is tipped to be the next speaker, remarked that the Moro peace talks are “back to square one” and that there is no more need for BBL, the MILF expressed serious concerns.

There is greater urgency to pass the BBL, not just as a way of stabilizing the country’s internal security, given the threat of recruitment of Moro youths by extremists, but also to sustain the navy’s pivot towards an external defense focus. This has become particularly urgent following the Scarborough Shoal incident and more recent Chinese actions in the South China Sea.

The navy would certainly benefit from policy continuity under a new administration that is not oblivious to the complexities of sustaining naval capacity-building—typically a drawn-out process that requires not just funding but also persistent political will.

Whether such efforts suffice in deterring Beijing against further South China Sea provocations, or that the navy will attain the force goals outlined under Strategic Sail Plan 2020 remain to be seen. But maintaining the present road towards a stronger, albeit small, externally oriented Philippine Navy sure beats throwing in the towel without a fight when push comes to shove in the South China Sea.

Koh Swee Lean Collin is a research fellow at the S. Rajaratnam School of International Studies, based in Singapore, focusing on naval affairs in Southeast Asia. His research activities can be viewed here.