The Philippines-China-U.S. Triangle: A Precarious Relationship 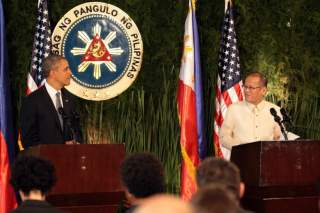 Earlier this year, the Philippines risked permanent estrangement with China by pressing ahead (March 30) with its arbitration case before a United Nations Arbitral Tribunal in The Hague. The move came after a year of futile diplomatic efforts by the Aquino administration to peacefully resolve the territorial disputes. With its latest legal maneuver, the Philippines is trying to place maximum diplomatic pressure on China amid an intensifying territorial dispute in the South China Sea.

China vehemently opposed the arbitration case, and argued against the “internationalization” of what it deems as essentially bilateral territorial disputes to be resolved outside the court of law. Since last year, China has repeatedly sought to discourage the Philippines from legally challenging what it considers to be its “indisputable” and “inherent” sovereignty over most features in the South China Sea. It even threatened the Philippines with sanctions and other punitive measures.

Against the backdrop of rising tensions between the Philippines and China, President Obama’s recent trip (April 28-29) to Manila couldn’t be timelier. Bereft of any credible minimum deterrence capability, the Philippines has sought deeper military cooperation with and commitment from its long-time ally, the United States. Shortly before Obama’s arrival, the two countries signed a new security pact, the Enhanced Defense Cooperation Agreement (EDCA), which grants American troops rotational access to Philippine bases in Clark and Subic. In exchange, the Philippines will benefit from expanded joint-military exercises and enhanced interoperability with the U.S. military. The new agreement aims to strengthen bilateral defense cooperation in both traditional and nontraditional security realms.

While the latest agreement deepens the United States’ strategic footprint in Asia, adding much-needed momentum to the Obama administration’s “Pivot to Asia” (P2A) policy, the Philippines, in turn, has been slightly alarmed by the lack of explicit American commitment to come to its rescue in the event of a military conflict with China over disputed features of the South China Sea.

The Gloves Are Off

In recent months, the growing assertiveness of Chinese paramilitary forces in the South China Sea—which have reportedly harassed Filipino fishermen as well as threatened Filipino troops stationed across the disputed areas—has set off alarm bells in the Philippines. Since 2013, China has expanded and streamlined its patrols across the South China Sea—part of the Xi administration’s efforts to consolidate Chinese claims in the Western Pacific.

In the disputed Second Thomas Shoal, recent weeks saw Chinese paramilitary forces imposing a blockade on Filipino troops, who struggled to receive food supply and other basic necessities from their command headquarters in the mainland Philippines. The Shoal falls well within the country’s 200-nautical-mile Exclusive Economic Zone (EEZ), and, since 1999, the Philippines has exercised control over the disputed feature. It seems, China is determined to wrest control of the Shoal, which is eerily close to the disputed Reed Bank, a hydrocarbon-rich area off the coast of the southwestern Philippine island of Palawan. In short, the Philippines has been facing threats to its territorial integrity as well as its vital energy interests in the South China Sea.

Frustrated with the lack of development on the diplomatic front, Philippine President Benigno Aquino III effectively abandoned his earlier attempts at reviving bilateral channels of communication with top Chinese leaders. Earlier this year he compared China’s territory-claiming efforts to those of “Nazi Germany” and stressed the importance of refusing to appease Xi. During an exclusive interview with the New York Times, Aquino reportedly stated, with respect to China, "You may have the might, but that does not necessarily make you right.”

Outraged by Aquino’s comments, China dismissed Aquino as an “ignorant, amateurish” leader, who fails to appreciate the delicate art of conflict management and diplomacy. At this juncture, there was little good will left for reviving bilateral diplomatic channels.

The greatest source of tensions in Philippine-China relations, however, was Manila’s threat to legally challenge Beijing’s sweeping territorial claims in the South China Sea. In early 2013, the Philippines initiated an ambitious arbitration case in The Hague, designed primarily to undermine China’s notorious “nine-dash-line” claims, based on which Beijing accords itself “inherent” and “indisputable” sovereignty over the bulk of the South China Sea.

Since China is a party to the United Nations Convention on the Law of the Sea (UNCLOS), Manila contends that it is obliged to respect the Philippines’ rights to exercise qualified jurisdiction over features that fall within its 200-nautical-mile EEZ. The Philippines contends that based on international law, China has no legitimate claim to features within the Spratly chain of islands, especially those controlled by the Philippines. The Philippines aims to protect its occupation of the Second Thomas Shoal as well as regain control of the Scarborough Shoal, which it lost to China after a brief military standoff in mid-2012.

Eager to avoid an embarrassing legal showdown, China reportedly offered certain “carrots” such as investment and trade deals and mutual disengagement from contested features such as the Scarborough Shoal. In exchange, the Philippines was asked to postpone its arbitration efforts in The Hague. The Aquino administration reportedly convened (late-January) a special cabinet meeting to discuss the offer, although Beijing denies having ever made such an offer.

Although there are no established “enforcement mechanisms” to ensure that the arbitration’s outcome will be binding, putting into the question the efficacy of the Philippines’ legal strategy, the Aquino administration hopes that its efforts will rally like-minded states such as Japan, Vietnam, the United States and India behind its cause. In fact, the Philippines has been encouraged by the fact that Indonesia, long seen as a neutral party vis-à-vis the South China Sea disputes, recently chose to openly reject China’s “nine-dash-line” doctrine.

Nonetheless, the legal strategy runs the clear and present risk of irreversibly antagonizing Beijing. And this could undermine prospects for a diplomatic resolution of the disputes in the near future, paving the way for a military conflict.

Both the Philippines and the United States share similar concerns over China’s accelerated military spending—and its implications for regional stability and freedom of navigation in international waters. Instead of dialing down tensions in the region by exclusively focusing on a peaceful, diplomatic approach, namely the development of a legally-binding Code of Conduct (CoC) in the South China Sea, Beijing has been relentlessly enhancing its naval capabilities. Critics claim that this is part of China’s short-to-medium-term goal of consolidating its territorial claims in the Western Pacific and its long-term ambition of becoming the preeminent naval power in Asia.

With many ordinary Chinese citizens developing strong feelings with respect to their country’s territorial claims in the Western Pacific, the Chinese leadership has also been grappling with a heightened climate of popular nationalism and media sensationalism, which has limited its room for diplomatic maneuver. At the opening session of the National People’s Congress in March, Chinese Premier Li Keqiang stated that China would resolutely safeguard its sovereignty, security and development interests. He underlined the Chinese leadership’s commitment to “further modernize [the Chinese military] and upgrade their performance, and continue to raise their deterrence and combat capabilities in the information age".

Facing a diplomatic deadlock, the Philippines is confronting the prospects of direct military confrontation with China. After all, Beijing can further expand its maritime patrols across the disputed waters, impose a tightening siege on Philippine maritime detachments, and implement an Air Defense Identification Zone (ADIZ) in the South China Sea. From the perspective of the Philippines, the Obama administration’s unequivocal commitment to aid its Southeast Asian ally in the event of confrontation with China is the ultimate form of deterrence. Many strategists believe that China’s assertiveness is a function of American strategic ambivalence under the Obama administration, allowing China to exploit the lopsided balance of power in the region, especially with respect to Southeast Asian countries, such as the Philippines and Vietnam.

Moreover, the Philippines’ anxieties stem from the fact that its 1951 Mutual Defense Treaty (MDT) with the United States is slightly vague on the question of mutual military obligations in an event of territorial conflict in the South China Sea. This is in contrast to the U.S.-Japan MDT, which implicitly states in Article I that American forces are obliged to contribute to the security of Japan against armed attack from without.

No wonder, during his earlier trip to Tokyo, President Obama unequivocally stated: “Our commitment to Japan’s security is absolute and article five [of the MDT] covers all territories under Japan’s administration, including the Senkaku islands”. Securing American military support, Japan is now in a strong position to reciprocate China’s recent calibrated de-escalation in the East China Sea.

To the dismay of many Filipinos, Obama made no comparable statements during his trip to Manila, where he consistently sought to reassure China that (a) Washington takes no position on the South China Sea territorial disputes and (b) the new security pact (EDCA) with the Philippines was not directed at Beijing. At some point, Obama went so far as stating, “It’s inevitable that China is going to be a dominant power in this region,” encouraging the Philippines to pursue a diplomatic resolution to its territorial disputes based on international law.