The Philippines' Massive Lawfare Blunder in the South China Sea 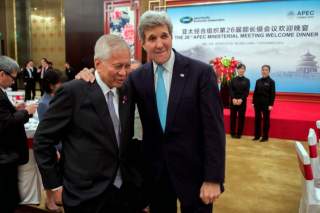 This week China forcefully reiterated its refusal to participate in an international arbitration brought by the Philippines challenging Beijing’s South China Sea activities. Given that China’s aggressive actions have been the main cause of rising tensions in Southeast Asia, it is not surprising that many governments, including the U.S., have supported the Philippines arbitration effort.

This support, however, is misguided. The Philippines’ “lawfare” strategy is almost certainly going to fail, and it will probably even make it harder to reach a durable settlement of disputes in the South China Seas region.

In February 2013, the Philippines filed a request for arbitration against China pursuant to the U.N. Convention on the Law of Sea (UNCLOS), the leading international treaty governing the world’s oceans. The Philippines’ claim arose out of a series of tense confrontations with Chinese government ships around waters and shoals claimed by both nations.   In a far-ranging request, the Philippines asked an arbitral tribunal to rule that China’s actions in the South China Sea are in violation of UNCLOS.

It is not surprising that the U.S. has blessed the Philippines’ litigation strategy. While the U.S. has tried to avoid taking sides in regional territorial disputes, Washington has increasingly sought to persuade China to become a “responsible stakeholder.” For example, President Obama recently urged China to “reinforce and abide by basic international law and norms” Pushing China to accept international arbitration and use international law to resolve a dispute under international law seems like a no-brainer. Indeed, the U.S. released an analysis last week sharply criticizing the legality of China’s territorial claims in the South China Sea and providing support for some of the Philippines’ legal arguments.

But supporting the Philippines’ arbitration is a dead-end.  Although many of China’s actions in the South China Sea are provocative and quite possibly illegal, the Philippines’ claim faces significant legal obstacles.  China has (like many other nations) excluded disputes related to maritime boundaries from the dispute settlement processes created by UNCLOS. So China is probably correct that at least some of the Philippines’ claims, which essentially demand that the tribunal recognize Philippines’ sovereignty rights, are beyond the arbitral tribunal’s competence.

Additionally, even if the arbitral tribunal issues an award in the Philippines’ favor, China has enough of a plausible legal argument that it will be able to denounce any award as illegal due to a lack of jurisdiction.  It will then refuse to comply with the award.  Because the UNCLOS system has no mechanism for imposing sanctions on states that defy its judgments, China will not face any immediate or tangible punishment for its non-compliance.

The Philippines government and its lawyers have stressed that if China defies the arbitral tribunal’s award, China will suffer damage to its reputation.  Moreover, they argue, the award will enable the Philippines to rally regional and international support against Chinese activities in the South China Sea. But this is largely wishful thinking.

While it is true that states like China suffer reputational damage if they openly ignore or violate an international tribunal’s judgment, history shows that most states can weather such reputational damage without serious consequences. In 2013, for instance, Russia refused to participate in a hearing before the International Tribunal for the Law of the Sea (ITLOS) over its detention of a Dutch ship full of Greenpeace activists protesting its oil drilling activities.  Although the ITLOS ordered Russia to release the activists and return the ship within 30 days of its judgment, Russia ignored the order and waited nearly a year before finally releasing the seized Dutch vessel.  Russia suffered little long-standing reputational damage and hosted the Olympics with great fanfare barely two months later with little international fuss.

In 1986, the United States openly defied a clear order from the International Court of Justice to withdraw support for the Contras and the mining of harbors in Nicaragua.  Although the U.S. was condemned in the UN General Assembly, the reputational fallout was minimal and quickly forgotten. In 2008, the U.S. again ignored a clear order of the ICJ by failing to stop an execution of a Mexican national in violation of a treaty obligation. This time, the U.S. did not even face a negative General Assembly resolution.

In all of these cases, the non-complying state was able to invoke plausible and even persuasive challenges to the international courts’ jurisdiction. These arguments, though rejected by the international tribunals, provide states with a continuing justification for their non-compliance.  China will likely do the same, and will even be able to cite the U.S. and Russian precedents for its own actions.

Therefore, it seems likely that the Philippines lawsuit will only succeed in antagonizing China without changing its behavior.  Even worse, it is likely to discourage China from considering voluntary international arbitration of future maritime disputes.

This would be particularly disappointing because voluntary international arbitration has been a useful and effective tool to settle similar maritime disputes. Just this past summer, India and Bangladesh settled a long-standing maritime delimitation dispute in the Bay of Bengal under the same arbitral procedure that the Philippines is trying to use against China.  But unlike China, India has consented to giving the arbitral tribunal jurisdiction to make maritime delimitations and did not contest the tribunal’s jurisdiction.

The U.S. also used voluntary international arbitration to settle a longstanding maritime dispute with Canada over the Gulf of Maine.  Both of these cases have resulted in compliance by the parties involved and, at least in the U.S.-Canada case, it has also resulted in a stable settlement of a long-running dispute.

Due in part to domestic pressures for a robust nationalism in defense of all territorial claims, China has not yet reached the point where arbitration seems like a reasonable way to settle its maritime disputes.  And since it has now spent months denouncing the Philippines arbitration as illegal and illegitimate in its domestic press and internationally, it will be even harder to accept any form of international dispute resolution in the future.

This is why the Philippines’ effort to force China to accept arbitration now is doomed to fail and will probably backfire. The Philippines will be in no stronger position vis-à-vis China than it was before the arbitration, even if it wins an award.  Meanwhile, the overall credibility and effectiveness of the UNCLOS dispute resolution system will be called into question.  And the U.S. goal of a China that “abides by and reinforces” international law and norms will be even farther off.

Julian Ku is the Maurice A. Deane Distinguished Professor of Constitutional Law at Hofstra University.