The Phony War Against Donald Trump 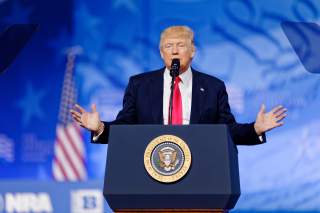 James Comey’s public testimony to the Senate Intelligence Committee revealed both more and less than expected. It revealed less than expected by President Trump’s critics: Comey related no other incidents as eyebrow-raising as his account of when Trump asked him, in discussing the investigation of Mike Flynn, to “let this go.” Comey wrote memoranda to document each of his direct discussions with the president, but based on his testimony to Congress, none of those other memos contains anything comparable to the exchange about Flynn.

In his prepared remarks for the hearing, Comey described President Trump asking for his loyalty. This is one place where Comey’s testimony was more revealing than expected—not in showing that the president might apply vague pressure to his employees but in showing how ill-defined the relationship between a president and America’s intelligence agencies can be. There is a difficulty here that does not begin or end with Trump, a basic, but unexamined, problem of how the executive branch operates. How can it be both political and, at the same time, above politics? How can the president have full legal authority not only to dismiss the FBI director, as Comey testified, even to direct what the FBI does and does not investigate, while the FBI also holds itself to be “independent”? And what does it mean for any intelligence service to be independent of elected leaders—and thus, independent of the public?

These questions might seem too big to be asked, but they explain a great deal about what’s happening in Washington. Among media and political professionals, it’s taken for granted that there are informal rules—“norms”—that prevent too much politicization of police and intelligence agencies, even though the norms are not perfect. Even when politicization obviously does occur, as in the way intelligence was abused to concoct the case for the Iraq War, the pretense of sobriety and objectivity has to be maintained. Trump does not maintain that pretense, which is one reason why Washington’s political and media class united against him. He tears away the veil, and by doing crudely what other leaders do subtly, he shows how the machinery of executive government really works.

Trump is a political outsider, and he came into office with the same doubts about the independence of executive agencies, including the “intelligence community,” that millions of ordinary Americans harbor. They wonder whether spies and bureaucrats are selfless servants of the public good or every bit as self-interested and ideological as elected officials are. The suspicions that Trump and grassroots Republicans entertain—not to mention many grassroots progressives—may be excessive, but they are sincerely held, and they explain a great deal. They explain why Trump, for example, views the federal bureaucracy as the enemy, and they explain why Trump might be very concerned about “loyalty” on the part of those who serve under him, including the FBI director.

High officials such as Comey are no strangers to political pressure, but they are unaccustomed to a president being as blunt as Trump is. In his testimony Thursday, Comey alluded to the Obama administration’s attempt to enfold the FBI’s investigation into Hillary Clinton’s private email server into a narrative that would serve the Democratic nominee’s interests in 2016: Comey testified that Obama’s attorney general, Loretta Lynch, “had directed me not to call it an investigation, but instead to call it a matter, which confused me and concerned me.” Lynch’s brief meeting with Bill Clinton on a runway tarmac in Phoenix, Arizona was, according to Comey, what prompted him to speak publicly about the reopening of the investigation into Hillary Clinton’s activities. “In an ultimately conclusive way, that was the thing that capped it for me, that I had to do something separately to protect the credibility of the investigation, which meant both the FBI and the Justice Department,” he told Sen. Richard Burr.

Comey’s actions may have had an effect on the election, however, and supporters of Mrs. Clinton have long viewed Comey’s move as political—or at least, they did so before Comey became a focal point for Trump criticism. In his testimony Thursday, Comey acknowledged the political and personal stakes: he told Sen. Joe Manchin, “if Hillary Clinton was elected, I might have been terminated.” The FBI director’s job was fraught with political peril, whether Trump or Clinton won the election.

Yet Comey was no defenseless innocent caught in the riptide. He revealed in his testimony Thursday just how well he understood the weapons at his disposal, including the ability to leak politically embarrassing material. He admitted to leaking his own memo of his talk with Trump about Flynn. He told Sen. Susan Collins, “my judgment was, I needed to get that out into the public square. And so I asked a friend of mine to share the content of the memo with a reporter. Didn’t do it myself, for a variety of reasons. But I asked him to, because I thought that might prompt the appointment of a special counsel. And so I asked a close friend of mine to do it.”

He may have believed he had good, defensive reasons for doing what he did. But Comey certainly knew how to leak a politically useful document, and even if one has faith in Comey’s personal integrity—he admitted what he did when questioned under oath, at least—how much faith should one have in other bureaucrats, investigators, and spies? Clearly if any disgruntled FBI man or other government insider wanted to damage a president or sabotage an elected leader’s agenda, he has the means to do it. Mark Felt did so—as “Deep Throat,” his guidance was indispensable to Woodward and Bernstein in breaking open the Watergate scandal. Felt seems not to have acted simply out of public interest; he was angry at President Nixon for failing to make him the next FBI director.

Trump’s critics do not need to be convinced that the president has committed impeachable acts—they simply want to get rid of him, and they have never allowed that he could be a legitimate leader (albeit one whose agenda they oppose), regardless of his victory last November. Throughout 2016, many hostile pundits pronounced Trump “disqualified” from becoming president (or before that, the Republican nominee), as though that decision was theirs to make, not the voters’, and as though it were a decision to be made based not on the Constitution’s qualifications for office but on a candidate’s adherence to the “norms” sacred to Washington insiders—but which appear to mean little to a distrustful public.

Trump has violated Washington’s norms egregiously; but he has not actually broken any laws, and even in loose, political terms, he has not obstructed any investigations, based on what Comey testified. Comey did not take Trump’s wishes regarding Flynn as an order. He did not consider resigning—as he had once earlier in his career during the George W. Bush administration. Trump raised the Flynn matter only once. Trump did not try to shut down the investigation into Russia’s interference into the 2016 election—what he did lean on Comey to do was to state publicly that Trump himself was not under investigation. As Sen. Marco Rubio pointed out, by now testifying to that effect, Comey was finally giving Trump what he had asked for all along.

The differences with Watergate are sharp. There was an indisputable crime at the heart of the Watergate affair, the burglary of the DNC offices in the Watergate complex. Further crimes were committed as part of the cover-up—this is a key point that is often misunderstood. Nixon knew that his staff were paying hush money to the burglars. Had it not been for that, if Nixon had only applied political pressure on the FBI to call off the investigation into the burglary and its perpetrators, the case against the president would have been much harder to make. The hush money was important for convincing members of Congress that impeachment could be in order, though Nixon resigned before he could be impeached.

There is no known crime at the heart of the Trump-Russia affair, and no crime has yet been even credibly alleged in President Trump’s involvement in the investigation. No hush money changed hands, as far as anyone has speculated. Comey affirmed in his testimony that he told Trump that he (Trump) was not a target of investigation in the Russia inquiry. Comey did say that Flynn was in possible legal jeopardy, as a result of his interactions with foreign officials and what he told the FBI. Plausibly, Flynn violated rules for foreign lobbyists, and if he lied to the FBI, he would be subject to prosecution. Trump violated norms in suggesting to Comey that the FBI should “let go” of the investigation into Flynn. But he did not commit a crime by doing so, and he may been unusual less for putting pressure on the FBI than for the personal and direct way in which he did it. Certainly Trump’s desire for Comey to publicly exonerate him in the Russia business seems directly parallel to Loretta Lynch’s attempt to get Comey to play along with a narrative favorable to the Democrats when talking about the investigation into Hillary Clinton.