The PKK Rumbles in Northern Iraq 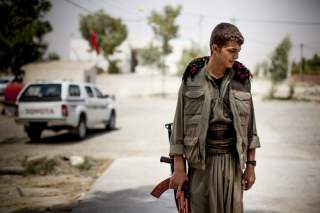 Makhmour, a small farming town with a population of 28.000, is part of the more than 600 miles long frontline that curls from the northwestern to the eastern border of war-torn Iraq. The town lies just 50 miles southwest of Erbil, the capital of Iraqi Kurdistan. Two weeks ago, around 40.000 civilians had to flee Makhmour due to the rapid Blitzkrieg-like advance of the Islamic State (IS) and its henchmen.

IS forces took Makhmour in a coup de main, yet their military luck only lasted three days for they encountered a formidable foe, just as skilled in guerilla warfare and just as determined as the jihadists—the fighters of Kurdistan’s Workers’ Party (PKK). The PKK  fiercely engaged IS in order to protect 12.000 Kurdish refugees from southeastern Anatolia, who have been living in a camp at the outskirts of Makhmour since 1994. On August 6, the PKK covered their retreat through the mountains; a few days later the PKK fighters were back and provided the assault troops who—along with special counterterrorism peshmerga units from the Kurdistan Democratic Party (KDP) and the Patriotic Union of Kurdistan (PUK)—took back the town in a few hours. U.S. fighter planes provided air cover.

Ironically, while the West is ramping up delivery of arms to the Kurds, the most effective military units defending Kurdistan are designated a terrorist organization by the U.S. State Department, the European Union, and NATO. For the past three decades, the PKK —a far-left secular movement that once embraced Marxism—fought the Turkish state over the creation of an independent Kurdistan by any means, including suicide attacks, kidnappings, as well as assassinations. Only in April 2013 did both sides agree to a ceasefire. Consequently, experts doubt that the PKK will benefit from any weapons deliveries.

However, in the vicious conflict against IS, the PKK has proven indispensable so far. During the initial thrust of IS into Kurdistan and the hasty retreat of the peshmerga, the PKK, along with its Syrian counterpart, the Syrian-Kurdish Protection Units, stood their ground and fought rear-guard actions that may have saved the lives of thousands of people.

In Makhmour, the PKK fighters don’t bother to conceal their perceived military superiority: “The peshmerga are not very disciplined. They come and go as they please,” states Nujeen, a 45-year-old female fighter who grew up in Frankfurt am Main in Germany and who has been a PKK member for 19 years. Nujeen is known to be an experienced fighter. During the assault on Makhmour she commanded a squad in combat. “The peshmerga withdrew from the town without notifying us, and without firing a single shot. They just left.” In contrast IS combatants are considered expertly agressive fighters. “They fight like guerillas, they fight like us.”

Naturally, General Najat Ali has a different opinion. He is the commanding general of all peshmerga forces on the Makhmour frontline. “We did not just run away,” he petulantly emphasizes, “We had to withdraw out of strategic reasons.” Colonel Sabir Bakiv, who according to himself commanded 200 peshmerga during the assault on Makhmour, stresses that the PKK was not solely responsible for the retaking of the town. The KDP special forces of the president of the Kurdistan Regional Government, Massoud Barzani, as well as the PUK counterterrorism forces of the former Iraqi president, Jalal Talabani, also played a key role: “The armor units on the main road bore the major burden in the assault and forced Daash [the local designation for IS] to retreat.”

One of the principal problems with the peshmerga forces is unity of command. They are not a homogenous force. Despite an effort spearheaded by the Ministry of peshmerga to merge units, the lightly armed fighters are split up between the two most influential Kurdish parties in Northern Iraq, the KDP and PUK.  Between 1994 and 1997 both parties, with the participation of the PKK and other groups, engaged in a bloody civil war that cost, according to some estimates, up to 5.000 lives.

Back in the PKK camp, Majeed, a 25-year veteran of fighting in Eastern Turkey, proudly boasts how he killed one Daash: “It was easy!” Majeed points to a stocky, elderly man with a black moustache and exclaims: “He shot four Daash! But he is the machine gunner and with that weapon killing is easy!” All the fighters present burst out in laughter, while passing around food.

The PKK commander’s name in Makhmour is Tekoshar Zagros. The 40-year-old leader dons the traditional olive green PKK combat fatigues, wide pants and a sash swung around his waist. Zagros is nonchalant about the recent fighting: “For us it was not a heavy fight. We know how to defeat Daash. After all we have been fighting them in Syria for the past two years.” He recently lost one man in combat—a “martyr” according to Zagros. Three of his men have been wounded so far. He does not want to comment on IS casualties during the re-conquest of Makhmour. Depending on whom you ask casualty figures vary from 8 to 80 KIA. However, Zagros stresses the strengths of the enemy: “Now they are fighting in a mixture of regular army and guerilla forces. Against their heavy weapons we only can use AK-47s, machine guns and RPGs. What we need above all are modern weapons!”

Despite this imbalance, Zagros is convinced that the Kurds will prevail in the long run: “Daash may own the day, yet we dominate the night! They are already on the defensive.”  After some confusion and poor coordination during the initial stage of the fight with IS the PKK commander vehemently states that things have improved: “We are now coordinating all of our operations across the board. This has not ever happened before!” He also acknowledges the effectiveness of the US air campaign in boosting Kurdish morale.

Whoever is really responsible for the re-conquest of the town, the news of the stamina and military finesse of the PKK fighters in Makhmour has apparently also traveled to Erbil. In an unprecedented public appearance, Massoud Barzani, openly praised the PKK fighters for the defense and re-capture of Makhmour on television. Barzani is head of the KDP, which for years was engaged in a low-intensity conflict with the PKK and even supported Turkish military operations against the group in the 1990s. Now a fragile cold peace is in place. President Barzani—a seasoned fighter and veteran of many conflicts—knows that unity is indispensable for the defense of the Kurdish areas in Northern Iraq, even if it means shaking hands with your former adversary.