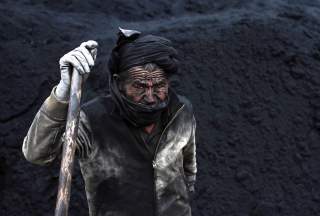 The New York Times reported on July 25, 2017 that U.S. advisors and Afghan officials are trying to use Afghanistan’s mineral wealth potential—once estimated at $1 trillion—to sell President Donald Trump on a war he understandably has little enthusiasm for.

This new sales strategy is dangerous as it aims to exploit Trump’s cartoonish views on global intervention, which meld the minds of a medieval emperor and a modern-day businessman.

Trump has on several occasions said that the United States should “take the oil” in conflict zones like Iraq. His explications have varied in focus, but “take the oil” appears to rest on two basic principles: what is theirs becomes ours once we invade; and foreign wars should at least pay for themselves, if not become profitable ventures.

Those who seek a long-term U.S. presence in Afghanistan are now desperate because the president has rejected the war strategy put forward by his bureaucracy and political appointees. According to POLITICO, the National Security Council Principals Committee meeting last week chaired by Trump was a “sh*tshow” that ended with the president sending back the Afghanistan strategy presented to him, further delaying a review that has already been extended twice.

Within the White House, the McMaster camp has tried to make the hardest sell: doing away with timelines, pressuring Pakistan, and abandoning reconciliation with the Taliban—a recipe for endless war in a landlocked, impoverished, and factionally divided country.

Earlier this year, McMaster reportedly showed the visually dependent Trump a slideshow of Afghanistan in 1970s—presumably the same pictures of local women in miniskirts and hippy tourists that make their rounds on social media every month or so. Trump apparently did not bite McMaster’s superficial attempt to make the case that the country has a relatively more liberal and peaceful past that can be realized once again.

Since Trump came into office, Afghan officials, including President Ashraf Ghani, have tried to quell the U.S. president’s Afghan-skepticism by talking up the country’s mineral potential.

In 2010, The New York Times reported that the Pentagon identified vast deposits of copper, gold, iron, lithium and other minerals in Afghanistan. Media-savvy Gen. David Petraeus spoke of great prospects of Afghanistan’s mineral industry and a Pentagon memo provided to the Times described the country as a potential “Saudi Arabia of lithium.” Afghan officials claimed that the mineral wealth provided the country with a path away from donor dependency.

But the case of the Mes Aynak copper mine demonstrates the false promise of Afghanistan’s mineral wealth being a short-to-medium term positive game-changer.

In 2007, Kabul granted a consortium led by the Metallurgical Corporation of China (MCC) a $3 billion, thirty-year lease to mine Mes Aynak, home to Afghanistan’s largest copper deposits. Ten years later, extraction of copper has yet to begin on the site. The project is at a standstill as security concerns grow and the MCC looks to revise the terms of the contract, not only lowering Kabul’s royalty rate, but also eliminating some components of the project, including a coal power plant and railway line. Similarly, an Indian consortium that was awarded a concession five years ago at the massive Hajigak iron ore mine continues to hedge and reportedly never signed a final contract with Afghanistan’s Ministry of Mines and Petroleum.

The leading American proponent of a resource-driven war in Afghanistan is Blackwater founder Erik Prince. Inspired by the British East India Company, Prince has called for replacing U.S. and coalition forces in Afghanistan with private mercenaries who focus on securing Afghanistan’s resources, including its vast mineral deposits, instead of its people, rejecting the population-centric counterinsurgency doctrine that has become part of the Beltway orthodoxy since the Iraq surge.

Prince has multiple connections to the Trump camp. For example, his sister is the U.S. education secretary. But, more importantly, Trump advisor Steve Bannon appears to be a kindred spirit. Not only has Prince appeared multiple times on Breitbart’s radio channel and website, but Bannon also brought Prince to meet with Defense Secretary James Mattis this month. The Bannonites are cultural and economic nationalists averse to nation-building and protracted military deployments abroad, but they are not anti-war or anti-imperialism. Prince’s private-sector-led, resource-driven neoimperial approach notionally—and only notionally—resolves the Afghanistan dilemma for the Bannonites of how to combat jihadists in Afghanistan without expending large amounts of American blood and treasure.

Also advising Trump on the resource-driven war in Afghanistan is Stephen Feinberg, the owner of the massive U.S. military contractor DynCorp International. Even if Afghanistan’s minerals industry continues to languish, Feinberg and Prince would profit off of providing logistics and other services, including securing supply lines. And for Prince, who has gone from being a veritable arm of the CIA to a business partner of the People’s Republic of China, it would fuse his old and new lines of business.

Prince’s Frontier Services Group (FSG), based in Hong Kong, is positioning itself as a major contractor for China’s Belt and Road Initiative. According to China’s Global Times, FSG will open up training bases in China’s Xinjiang region bordering Afghanistan and Pakistan.

Afghanistan’s maladies are many, but a hasty push on exploiting its mineral wealth would add another: “the resource curse.” It is already a narco-state in which its power elite and Taliban insurgency are sustained by the drug trade and illiterate warlords become overnight millionaires by securing U.S. supply lines. America has done enough to create a warped, conflict-dependent economy in Afghanistan.

As the Trump administration dithers, the situation in Afghanistan is dire. The insurgency is gaining control over more and more territory and Afghan security forces are dying at record numbers.

At the same time, Afghanistan’s inter-ethnic tensions are perhaps the highest they have been since the fall of the Taliban, driven in part by Ghani’s failure to fulfill his responsibilities as part of the National Unity Government agreement. The ethnic divide will strengthen as parliamentary and presidential elections, scheduled respectively for 2018 and 2019, near and the various factions wrangle over electoral procedures and overall fairness.

Without political stability and reconciliation with the insurgents, large-scale mineral extraction in Afghanistan is more likely to fuel conflict in the country than empower the incumbent government to establish its writ. Afghanistan lacks the governance framework and overall rule of law to manage its mineral resources. Mining legislation is inadequate.

But, more fundamentally, the country’s elite has one foot out the door and simply would like to suck as much money from the foreigners while they have a chance. Afghanistan is a country in which frontline army officers steal funds meant for purchasing food for their soldiers, letting them fend for themselves or starve. Foreigners only enable Afghanistan’s looter baron social pathology.

Furthermore, a U.S.-military contractor-led role in Afghanistan’s minerals sector literally confirms the presently latent narrative among Afghans that the United States has ulterior motives; that it seeks an excuse—perpetual warfare—to remain in the country and rob the country of its riches.

Even if Afghans are initially receptive to U.S. investment in the country’s minerals sector, they are likely to develop unrealistic expectations of what the supposed $1 trillion in mineral wealth can do for them. And when their hopes are dashed, America’s reputation will take a massive hit. It is more prudent to let other countries assume the financial, political and security risk from investment in Afghanistan’s minerals sector. Doing so also indirectly serves U.S. aims, broadening the set of stakeholders invested in Afghan stability.

There is also the problem of logistics. Minerals extracted from Afghanistan, even if processed in the country, would have to be transported out of the country. They would require new rail or road networks to be built inside Afghanistan. And, given that Afghanistan is landlocked, the raw minerals or mineral products would have to be shipped out to other markets through neighboring states. U.S. companies would have to choose between China, Iran, Pakistan or Central Asian states in Russia’s sphere of influence. Not an easy choice.

Premature exploitation of Afghanistan’s mineral resources potential could fuel another generation of conflict in the war-torn country. Agriculture is the backbone of the Afghan economy, serving as its largest direct and indirect employer. When it comes to the Afghan economy, America’s focus ought to be on increasing the efficiency and diversity of Afghanistan’s agricultural output, helping it manage its water resources, and developing cold storage logistics and value-added industries.

Mineral resources presently serve as a distraction, creating the false impression that Afghan self-sufficiency can be attained overnight and without hard work or institutional development. Tendering for large concessions should be postponed until Afghanistan has the requisite stability and governance framework to enable a transparent bidding process and equitable distribution of royalties. That end state is contingent upon bringing an end to the nearly sixteen-year Afghan war—a war that can only be resolved through political settlement with the Taliban anchored by a regional diplomatic solution, including not just Pakistan, but also China, Iran and Russia. The Obama administration never fully embraced a diplomatic solution. And no stakeholder in the Trump administration appears to be prioritizing it.