The Politics of Hurricane Harvey 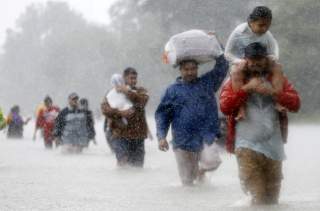 Hurricane Harvey is a once-in-five-hundred-years storm, Houston’s third one in the last three years. Ocean scientists and meteorologists are all over the media explaining that hotter, higher seas make storms wetter and longer, and storm surges higher. Whether you call that climate change or not, the future looks worryingly like the watery terror Texans are living through.

Our politics, too, look like a five-hundred-year storm whose clouds may never lift. From the amount of acrimony over disaster relief to flood-swamped Texas, it would be easy to conclude that partisan polarization over climate change is as deep and hopeless as ever. But that would be wrong. Underneath the tumult, the outlines of what could form cross-partisan coalitions are clear. Whether the impetus is the aftermath of Hurricane Harvey this year, or a rise in energy prices next year, or an effort to reshuffle political coalitions before the 2020 presidential elections, we will see cross-partisan initiatives that reshape our energy and climate policies. That is clear. Whom they benefit, who pays the cost, and whether they have enough effect to slow warming is very much up in the air—and up to how organizers choose to use cross-partisan energies now.

First, partisan splits on climate are narrowing, and the regional differences we see playing out in congressional rhetoric aren’t actually matched on the ground. Majorities of citizens in every state favor actions to blunt the effects of climate change, such as regulating CO2 as a pollutant, limiting CO2 emissions for existing coal fired power plants, and requiring 20 percent of utilities’ electricity to come from renewable resources. So public opinion isn’t actually the stumbling block.

Second, responding to climate change is not one single thing with one set of partisan ramifications. David Roberts at Vox helpfully breaks down the difference between adaptation—changing policies and practices to deal with a hotter, wetter world—and mitigation, which is the effort to slow or reverse changes to the climate. Adaptive measures are the bread and butter of local politics—zoning, insurance, building codes, hardened infrastructure, emergency response. They will expose divisions even more basic than ideology—who benefits, and who bears the costs. There is reason to worry about whether our fractured politics can take on these challenges comprehensively, but much reason for optimism that they can be done. What political forces will choose to focus on adaptation challenges; whether extreme weather and temperature and sea change concerns are factored into federal conversations about infrastructure; how resources are divided between weather-proofing poorer neighborhoods and shoring up expensive beach real estate—those are all challenges that aren’t stopped by gridlock and are influenced by many forces beyond partisanship.

Until very recently, mitigation was seen as a challenge that could only be met globally, and the idea that the same set of parochial politics—and coalition opportunities—applied would have been ridiculed. No one is arguing that cutting emissions one city, state or business at a time is ideal—but in a federal society, an atomized world, and a polarized moment, it seems to be the option that we’ve got. Even before the Trump administration announced the U.S. pullout from the Paris climate accords, an array of political, corporate and civic actors across Democratic-Republican lines made commitments and took action to counter climate change. On paper, state commitments could still achieve 60 percent of the Obama-era federal renewable energy goal. The ten states that joined California’s Zero Emission Vehicle Program make up 29 percent of the new vehicle registrations in the United States, which makes that entity a top global consumer of automobiles. When the Paris accords were signed in 2016, 114 companies representing 476 million tonnes of annual CO2 emissions—roughly as much as Canada or Mexico in 2013—committed to the Science Based Targets initiative, which specifically focuses on reducing emissions.

All this means that climate and environmental activists—who already form a sometimes uneasy coalition—will find the issue space crowded and its very definition contested. We know from the study of how transpartisan coalitions form, and when they succeed, that positive policy development demands not just opportunities on paper but also entrepreneurs who are willing to build across cultural divides, identify explicit common interests, and give up on topics of disagreement.

Multinational corporations looking to meet climate pledges, such as utilities looking to diversify power sources, and state and local governments looking to protect infrastructure and revenue sources, will share some interests. They will also differ on other interests and set a very different tone for policy that responds to climate change and its effects. In the expensive aftermath of Harvey, their voices and interests are likely to rise.

What kinds of coalitions form around them—and whether they are understood as Democrat or Republican, globalist or local, do-gooder or for-profit, Wall Street or Main Street—is all up for grabs as the waters recede.