The Politics of Washington Have Wrecked Afghanistan's Future 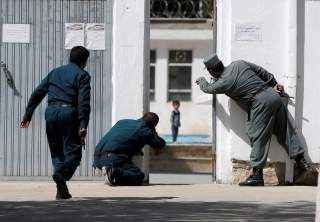 President Donald Trump rang in the new year with a Twitter salvo directed at Pakistan, claiming that Washington has given Islamabad more than $33 billion in aid after 9/11, but has only received “lies and deceit” in return. The administration has since announced the suspension of military assistance to Pakistan. An unnamed State Department official has described the suspension as reversible should the Pakistani military take desired action against the Haqqani Network.

The Trump administration appears to be moving toward a strategy of compellence toward Pakistan. It may be nonviolent right now, but could include lethal covert action, both visible (e.g. drone attacks) and less visible, and yield a series of unintended consequences that push the bilateral relationship beyond the point of no return.

The asymmetries of the U.S.-Pakistan relationship may drive some in Washington to believe in the promise of compellence. But these asymmetries are counterveiled by mutual dependencies and other factors, including geography and salience.

The United States does the cause of stabilizing Afghanistan no good by externalizing blame for the failing war or attributing it to a single insurgent network. The future of Afghanistan is bleak. Regardless of what American officials say, the United States can easily walk away from Afghanistan without injuring itself. But it is regional states that will bear the fallout from the disaster unfolding in Afghanistan—a disaster that has American and Afghan fingerprints all over it.

The cycle of violence in Afghanistan is moving in an untenable direction. The Taliban now control or contest over 43 percent of Afghanistan’s districts, encompassing most of the outer perimeter of the country. Civilian deaths due to coalition bombing rise. Afghan security forces are dying in record-breaking numbers. Washington is arming more unwieldy militias with weapons. The documented Afghan economy has come to a standstill. Economic growth is surpassed by population growth. But drug production soars. Worst of all, Afghanistan’s leaders are heading toward confrontation with one another as the Trump administration looks on vainglorious and indolent.

The bitter truth about Afghanistan is this: the relative stability Afghanistan experienced in the initial years post–9/11 will likely prove to be an exception, not the rule, in the country’s post–1973 history. Afghanistan’s old wounds—no longer bandaged by U.S. dollar bills—are opening once again. They, along with a resilient insurgency, will consume the country. American introspection combined with cooperation with regional states may stave off an ugly civil war in Afghanistan.

Recent actions by regional states amount to a vote of no confidence in the U.S.-led strategy for Afghanistan. Virtually all of Afghanistan’s neighbors are taking active measures to prevent instability and violence from the country spilling into their own.

Last month, Tajikistan closed its border with northern Afghanistan after two of its border police officers were killed by Afghan drug traffickers. During this period, Russia delivered military hardware to the Tajik border with Afghanistan, to help Dushanbe control the border region.

In December, China—Afghanistan’s neighbor to the northeast—said that it would provide $85 million to support a mountainous Afghan army brigade to secure the border province of Badakhshan, the former anti-Taliban bastion where the militant group has made significant inroads since 2013. Chinese security forces have reportedly been conducting patrols inside Badakhshan since at least 2016.

There is also trouble in western Afghanistan. In late December, a commander with Iran’s Islamic Revolution Guards Corps claimed that Tehran conducted a unilateral operation in Afghan territory to free an Iranian captive. The Taliban have a strong presence along Afghanistan’s western frontier with Iran—due in part to support from Iranian intelligence.

And then there is Pakistan—the locus of Trump’s ire—which will spend over $100 million to fence its border with Afghanistan and line it with additional security posts. Pakistan presently has roughly one thousand posts along its border with Afghanistan and will add hundreds more. It will sustain a troop presence of around two hundred thousand along the Afghan border, complemented by the paramilitary Frontier Corps.

Afghanistan, in comparison, has around two hundred posts along the border with Pakistan. There is a four hundred mile stretch in southern Afghanistan where the Afghan government has no border posts—astonishing for a country that complains of cross-border insurgent inflows and has received $70 billion in assistance to build its security forces.

As Afghanistan’s neighbors work to insulate themselves from the country’s possible implosion, the U.S.-backed Afghan government continues to do itself no favors in the fight against the Taliban. Afghanistan’s western-educated President Ashraf Ghani was thought to have transcended the authoritarianism, irredentist revisionism, and myopic tribalism of his country’s elite. But he has instead quickly internalized those characteristics.

Ghani began his tenure with a courageous attempt at striking a new chapter in relations with Pakistan, which eventually brought the Taliban to the negotiation table—but the process was sabotaged by members of his government.

Since then, Ghani has reverted to a posture that only reinforces Pakistan’s distrust of Afghanistan’s leadership. Like his predecessor, Hamid Karzai, Ghani has opposed Pakistani attempts to fence the border, though it would benefit Afghanistan as well. Ghani proclaimed before an audience in Afghanistan that “every attempt at dividing the nation would fail.” By “nation,” Ghani meant Pashtuns in both Afghanistan and Pakistan. This hypernationalist rhetoric is the norm for Afghan leaders. Amrullah Saleh, the former Afghan intelligence chief, recently beseeched Trump to recognize the Pakistani city of Peshawar as an Afghan city in the same way he recognized Jerusalem as Israel’s capital.

Nearly half of Afghanistan could fall into Taliban hands, but Afghanistan’s power elite fantasize about a Greater Afghanistan based on maps from the nineteenth century. They boast of five thousand years of history, but they have little modern-day achievements to show for. Afghanistan’s empty pride has yielded empty hands. American largesse, which has made illiterate warlords into millionaires, and Washington’s messaging strategy in Afghanistan, which reinforces Afghan animosity toward its neighbors (who are there to stay), have only fed the country’s pathologies.

To thwart and eventually defeat the Taliban insurgency, Afghanistan needs a legitimate government not at war with itself. Afghanistan’s present “national unity government”—led by Ghani with his election opponent Abdullah Abdullah as “chief executive officer”—was forged through a settlement brokered in 2014 by then-U.S. Secretary of State John Kerry. In the words of Kerry, with the deal, Afghanistan avoided a civil war.

Since coming into power, Ghani has: reneged on his agreement with Abdullah to enact political reforms (though relations have recently improved); played non-Pashtun politicians off of one another as he attempts to centralize power; and twice-delayed parliamentary elections. Ghani is pushing the country toward civil conflict and creating greater space not just for the Taliban, but also for the so-called Islamic State.

Last year, Ghani forced his first vice president, Abdul Rashid Dostum, a warlord from the Jowzjan Province, into exile after he ordered his guards to rape a political rival after he was “physically incapable of doing so.” While Dostum is a detestable figure, his absence has left a power vacuum. Militiamen once under his control have now joined the Islamic State and the Taliban in the Jowzjan province. French fighters affiliated with the Islamic State somehow have made their way into the region.

To the east of Jowzjan lies the province of Balkh, one of the few provinces that has withstood the Taliban’s ground offensive and where Ghani has unwisely picked another political battle. In December, Ghani effectively fired Atta Noor, the warlord who served as the province’s governor. Early last year, Ghani engaged Noor in talks as part of a bid to sideline the country’s “chief executive officer” Abdullah. By the year’s end, Ghani sacked Noor (by accepting the resignation letter Noor provided earlier in the year as collateral). Noor has since rejected his own resignation and ordered the arrest of the man appointed to replace him as governor.

Now, there are rumors that Ghani could fire Abdul Raziq Achakzai, the warlord who has kept Kandahar from going the way of the Taliban and has recently supported Noor. Achakzai, whose forces drill holes in the heads of detainees, recently declared: “I was not appointed by this government, and it cannot fire me.” In June, he was photographed with the commander of U.S. forces, Gen. John Nicholson.

The Trump administration has looked away as Ghani has engaged in a domestic “game of thrones” while his country is on fire. This is partly because generals run the show in Kabul and Washington and a neutered State Department has been unable to restrain Ghani. The Trump cabinet includes three generals and an uninfluential secretary of state keen on depleting his organization. It took the Trump administration six months to nominate an ambassador to Afghanistan. During that time, it dismantled the State Department’s Special Representative for Afghanistan and Pakistan office.

The general consensus among U.S. observers of Afghanistan is that the Taliban is too strong to be defeated militarily, but it is not strong enough to take over the whole country. But infighting among Afghanistan’s power elite, much like in Vietnam, or for that matter, in Afghanistan when the Taliban first took over, could be the straw the breaks the camel’s back. The Army of the Republic of Vietnam, lest we forget, was a formidable fighting force—far more capable than Afghan army today.