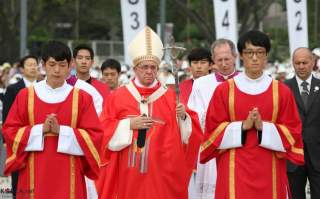 Before his final mass in South Korea on August 18, Pope Francis met with seven elderly ladies who had been Comfort Women. As teenagers during World War II they were trafficked by Imperial Japan to be sex slaves. Military records on the operation of a comfort station show that the girls had to service not only soldiers and sailors, but also Japanese government and corporate officials.

The Pope bent down and clasped the frail hands of each woman. One offered him a butterfly pin, a symbol of their lost innocence, which the Pontiff immediately fastened to his vestments and wore throughout the service. Prior to the mass, he was handed a letter from the Dutch former Comfort Woman, Jan Ruff O’Herne, who at 92 could not travel from her home in Australia to meet him. She wanted him to know that before she was chosen by Japanese Army officers in her concentration camp on Java and raped in a Semarang military brothel, her dream was to become a nun.

The women received more than the Pope’s blessing. They received affirmation that their history was believed and their suffering real. Francis has championed the elimination of human trafficking and preached on the evils of sexual slavery. By a simple gesture, he included their experience with all victims caught up in sexual violence. He understands that rape is a weapon of subjugation and humiliation. Unlike Japanese prime minister Shinzo Abe, the Pontiff does not rationalize the Comfort Women experience with “the 20th century was a century where many human rights were violated.”

Equally important, Pope Francis has helped internationalize and humanize the issue. The Abe administration has framed the Comfort Women issue entirely as a history problem with South Korea. The truth is that women throughout the Indo-Pacific region were the victims of the Imperial Army and Navy. The stories the women tell from the Andaman Islands to New Guinea, by Dutch gentry to Taiwanese aboriginals are shockingly similar.

As contemporary research has shown, sexual violence in conflict affects whole communities and generations. Recently, a Dutch woman came forward describing how as a four-year-old she waited daily on the steps of St. Xavier Church in the concentration camp at Moentilan, Java for her mother. Only as an adult did she learn that her mother’s lifetime nightmares were from being repeatedly raped by Japanese officers who had made the Church their headquarters. The mother was one of many “uncounted” Comfort Women.

Francis tacitly confirmed that the issue is not one of politics or diplomacy, as Chief Cabinet Secretary Yoshihide Suga repeats. But it is also not one of history as Suga and Abe want us to believe. Instead, it is a timeless humanitarian concern that can only be resolved through humanitarian action. The Pope returned the Comfort Women discussion to where it belongs—which is to comfort the victims.

But the Abe government has politicized the Comfort Women issue. The most unsettling omission in the Abe administration’s discourse on the Comfort Women is the failure to acknowledge the Batavia War Crimes trials. A 1947 Tribunal found a number of Japanese officers guilty of entering a civilian internment camp to forcibly select thirty-five girls and bring them in military vehicles to a military brothel in Semarang (Indonesia). The Batavia trial thus recognized the "forced prostitution" (to use the Dutch government's terminology) of women as a war crime.

Oddly, in 2013, there was a Cabinet Decision admitting that the trial documents were part of the official Japanese government records supporting the Kono Statement. These did not seem to have been considered in the recent government “review” of how the Statement was drafted. Instead, the Abe Government continues to parse the traumatic memories of Korean former Comfort Women and Japanese soldiers looking for discrepancies to question this sordid history.

The omission can lead to the disturbing conclusion that discrediting the Comfort Women, no matter the evidence, has a greater goal. This is to set aside any legal record or proceeding prosecuting Japan’s war criminals. The ease at which the Batavia trial verdict has been disregarded has implications for the verdicts of all the hundreds of war crimes trials throughout the Pacific after the war, especially the Tokyo War Crimes Tribunal.

Undoing the postwar regime and its “masochistic” history is a stated objective of the Abe administration. The path to regaining Japanese pride and independence, according to Mr. Abe and many in his administration, means not accepting the results of the Tokyo Tribunal and not being a victim to its “victor’s justice.” By ignoring the Batavia verdicts, the Abe government takes the first step to challenge the decisions of The Tribunal.

Paying homage at Yasukuni, the spiritual symbol of Imperial Japan is a ritualistic swipe at the Tokyo Tribunal. Yasukuni, where hundreds of war criminals are deified, which hosts a museum that celebrates Japan’s “liberation” of Asia and small shrines to the likes of the Kempeitai, does not accept Japan’s defeat or the condemnation of its war criminals. Thus, a visit or an offering sent is less about mourning than about a gesture as powerful as the Pope’s in affirming a certain point of view as fact.

In the end, it is not about the dead. As the Pope showed, it is the living that need peace. Maybe Abe should spend less time with the dead. At every international visit, the prime minister has made a point of visiting war memorials. On his recent trip to Papua New Guinea, Abe visited two memorials to Japan’s fallen at Wewak. He made no mention of how this horrific final campaign descended into barbarism and cannibalism. Nor was there mention of the thousands of POWs, mainly Indian and Australian, killed through starvation, overwork, disease or target-practice on the island.

At this year’s August 15th anniversary for Japan’s war dead, Abe, unlike past prime ministers, made no mention of apology for Japan’s aggression. Again, this is viewed as a rejection of the Tokyo War Crimes Tribunal’s judgments.

Central to Japan’s peace treaty with the Allied governments in 1951, was acceptance of the verdicts of the Tokyo Tribunal. Abe’s rallying the dead to abandon the Tribunal’s verdicts does not engender trust among Japan’s allies or foes. Thus, it is time for Prime Minister Abe to make an important gesture to reassure his critics. He can affirm that he has no plans to ignore or repudiate the Tokyo War Crimes Tribunal. Saying that he, for now, inherits the Murayama apology—he walked out of a parliamentary vote on this apology in 1995—is not enough. He needs to embrace these ideas.

Pope Francis’ quiet inclusion of the Comfort Women in his mass was a humanitarian gesture. It was an acceptance that no woman at any place or time should be subjected to the mercy of her captors. The political debate over Comfort Women to exonerate Imperial Japan’s war conduct has been damaging to modern Japan’s international image. Prime Minister Abe is best advised to affirm the verdicts of history and offer an unequivocal humanitarian response to the surviving Comfort Women in Korea and in other places.

Mindy Kotler is the director of Asia Policy Point.