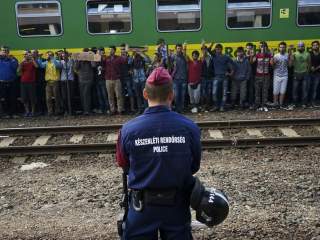 IN 1935, the anti-Nazi writer and Austrian-Jewish intellectual Joseph Roth published a story, “The Bust of the Emperor,” about an elderly count at the chaotic fringe of the former Habsburg Empire who refused to think of himself as a Pole or an Italian, even though his ancestry encompassed both. In his mind, the only mark of “true nobility” was to be “a man above nationality,” in the Habsburg tradition. “My old home, the Monarchy, alone,” the count says, “was a great mansion with many doors and many chambers, for every condition of men.” Indeed, the horrors of twentieth-century Europe, Roth wrote presciently, had as their backdrop the collapse of empires and the rise of uniethnic states, with Fascist and Communist leaders replacing the power of traditional monarchs.

Empire had its evils, as Roth himself details in another great work, The Radetzky March, but one cannot deny empire’s historical function—to provide stability and order to vast tracts of land occupied by different peoples, particularly in Europe. If not empire, what then? In fact, as Michael Lind has intuited, the underpinnings of the global order today attempt to replace the functions of empire—from the rules-based international system to the raft of supranational and multinational groupings, such as the North Atlantic Treaty Organization, the European Union, the International Monetary Fund, the International Court of Justice and the World Economic Forum. Silently undergirding this process since World War II has been the undeniable fact of American power—military, diplomatic and economic—protecting sea lanes, maritime choke points, access to hydrocarbons and, in general, providing some measure of security to the world. These tasks are amoral to the extent that they do not involve lofty principles, but without them there is no possibility for moral action anywhere. This is not traditional imperialism, which is no longer an option, but it is a far more humane replacement for it.

While the United States still remains the single strongest power on earth, it is less and less an overwhelming one. The diffusion of central authority in new democracies everywhere, the spread of chaos in the Middle East and North Africa, and the rise of Russia, China and Iran as regional hegemons—all work to constrain the projection of American power. This is part of a process that has been going on for a century. At the end of World War I, multiethnic empires in Europe—those of the Habsburgs and Ottomans—crumbled. At the end of World War II, the overseas empires of the British and French began to do the same. The end of the Cold War heralded the collapse of the Soviet Empire in Eastern Europe and parts of Eurasia. The early twenty-first century saw the toppling or erosion of strongmen in postimperial, artificial states like Iraq, Syria and Libya. The American empire-of-sorts—that is, the last power standing whose troops and diplomats have found themselves in a vaguely empire-like situation—is now giving way, too.

This partial retreat of American power has international and domestic causes. On the international front, vast urbanization, population growth and natural-resource scarcities have eroded the power of central authority everywhere. The rise of individual consciousness thanks to the communications revolution has only accelerated the trend. The United States just cannot influence other states’ decisions the way it used to. Meanwhile, the maturation of both violent millenarian movements and regional hegemons are direct threats to U.S. power projection. On the domestic front, the Obama administration, wishing to transform American society, has avoided major entanglements overseas and has sought to ameliorate relations with adversaries, principally Iran. This is a sign of imperial fatigue—a good thing, arguably, but something that nevertheless works to constrain, rather than project, U.S. power. The United States, in other words, is signaling that it will less and less be providing world order. This is not the work of one president. It is the beginning of a new phase in American foreign policy, following the hyperactivity of World War II and the Cold War—and their long aftershocks in the Balkans and the Middle East. Social and economic turmoil at home and intractable complexity and upheaval abroad are driving Washington toward retrenchment.

WORLD DISORDER will only grow. The weakening and dissolution of small- and medium-size states in Africa and the Middle East will advance to quasi-anarchy in larger states on which the geographic organization of Eurasia hinges: Russia and China. For the external aggression of these new regional hegemons is, in part, motivated by internal weakness. They’re using nationalism to assuage the unraveling domestic economies upon which their societies’ stability rests. Then there is the European Union, which is enfeebled, if not crumbling. Rather than a unified and coherent superstate, Europe will increasingly be a less-than-coherent confection of states and regions, dissolving into the fluid geography of Eurasia, the Levant and North Africa. This is demonstrated by Russian revanchism and the demographic assault of Muslim refugees. Of course, on a longer time horizon there is technology itself. As the strategist T.X. Hammes points out, the convergence of cheap drones, cyber warfare, 3D printing and so on will encourage the diffusion of power among many states and nonstate actors, rather than the concentration of it into a few imperial-like hands.

We are entering an age of what I call comparative anarchy, that is, a much higher level of anarchy compared to that of the Cold War and post–Cold War periods.

After all, globalization and the communications revolution have reinforced, rather than negated, geopolitics. The world map is now smaller and more claustrophobic, so that territory is more ferociously contested, and every regional conflict interacts with every other as never before. A war in Syria is inextricable from a terrorist outrage in Europe, even as Russia’s intervention in Syria affects Europe’s and America’s policy toward Ukraine. This happens at a moment when, as I’ve said, multinational empires are gone, as are most totalitarian regimes in contrived states where official borders do not conform with ethnic and sectarian ones. The upshot is a maelstrom of national and subnational groups in violent competition. And so, geopolitics—the battle for space and power—now occurs within states as well as between them. Cultural and religious differences are particularly exacerbated: as group differences melt down in the crucible of globalization, they have to be reforged in a blunter and more ideological form. It isn’t the clash of civilizations so much as the clash of artificially reconstructed civilizations that is taking place. Witness the Islamic State, which does not represent Islam per se, but Islam combusting with the tyrannical conformity and mass hysteria of the Internet and social media. The postmodern reinvention of identities only hardens geopolitical divides.

In the course of all this, technology is not erasing geography—it is sharpening it. Just look at China and India. For most of history, with exceptions like the spread of Buddhism in antiquity and the nineteenth-century Opium Wars, China and India had relatively little to do with each other, emerging as two civilizations separated by the Himalayas. But technological advances have collapsed distance. Indian intercontinental ballistic missiles can hit Chinese cities and Chinese fighter jets can pierce the Indian Subcontinent’s airspace. Indian warships have deployed to the South China Sea and Chinese warships have maneuvered throughout the Indian Ocean. A new strategic geography of rivalry now exists between China and India. Geopolitics, rather than a vestige of previous centuries, is a more tightly woven feature of the globe than ever. India seeks new allies in Vietnam and Japan; China seeks closer links with Russia and Iran.

In fact, there are no purely regional problems anymore, since local hegemons like Russia, China and Iran have engaged in cyber attacks and terrorism worldwide. Thus, crises are both regional and global at the same time. And as wars and state collapses persist, the fear we should harbor should be less that of appeasement and more that of hard landings for the troubled regimes in question. We know that soft landings for totalitarian regimes in Iraq and Syria have been impossible to achieve. The United States invaded Iraq, yet stood aside in Syria; the result was virtually the same, with hundreds of thousands of people killed in each country and extremist groups filling the void.

Another thing: Remember that globalization is not necessarily associated with growth or stability, but only with vast economic and cultural linkages. These can amplify geopolitical disorder in the event of an economic slowdown. That’s what we are seeing now. Take Africa, which has had years of steady economic growth thanks less to the development of a manufacturing sector and more to a rise in commodity prices. Commodity prices are now falling, along with Chinese infrastructure investment in Africa, as China itself experiences a dramatic decrease in GDP growth. Thus, economic changes in Asia imperil African stability, to the degree that it exists. Then there are the various radical Islamic movements rampaging across Sahelian Africa. This is actually the latest phase of African anarchy—in which the communications revolution brings millenarian Islam to weak and failed states. Obviously, the United States holds little sway over any of this.