The Post-Iran Deal Mystery: What Will Khamenei Do? 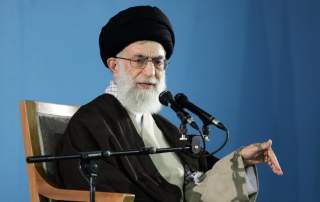 The American public remains justifiably anxious about Iran’s nuclear program. No one in Washington expects that the nuclear agreement announced on July 14 will be a quick fix to thirty-six years of bad blood between Washington and Tehran. But polls show a plurality of Americans still support diplomacy with Iran over military confrontation. If I were sitting in Tehran, I would zoom on this twist as a timely opportunity. On the other hand, the American side should not expect any big policy U-turns, but encourage Iranian moderation whenever possible. This is what both sides need to do to make the nuclear deal survive the Obama presidency.

No one man’s words and actions matter more in Tehran than those of Iran’s supreme leader, Ayatollah Ali Khamenei. The good news is he is a realist. The bad news is that he has to undo decades of an anti-American worldview that has his signature all over it and has become the ideological backbone of the Islamic Republic. Still, if anyone in Tehran can steer the ship in a new strategic direction, it is the supreme leader himself.

And the evolution in Khamenei’s thinking in the last three years shows a political survival instinct that America can tap into. No guarantees here, of course, but it might just be worth a shot. Back in March 2012, only a handful of weeks before the most severe set of sanctions were imposed on Iran, Khamenei was undeterred. In his Persian New Year speech to the nation, he asked Iranians to buckle up. As he put it then, Iran will go it alone and isolate itself from the world economy rather than give in to demands to curb its nuclear program.

But the intensity of the sanctions that soon followed caught him by surprise. Within a year, the establishment apparatus that Khamenei oversees had approved the presidential candidacy of Hassan Rouhani, a centrist who vowed Iran’s return to the global mainstream. Not only that, but Khamenei soon after publicly swapped his emphasis on “national self-sufficiency” for “heroic flexibility.” This was about face saving and the intimation was clear: It was time for Iran to look for ways to get itself out from under the crippling sanctions or it would risk collapse from within.

Tellingly, Khamenei remarked about “heroic flexibility” to commanders of the Islamic Revolution Guards Corps (IRGC), the most die-hard hawks in the Islamic Republic. And he did so a day after President Rouhani had expressed the same sentiment in a speech to the same IRGC commanders. The significance of the timing was resounding: Khamenei was backing Rouhani’s outreach to the world and he kept at it until a nuclear deal was signed twenty months later.

But given his domestic political status and track record, Khamenei’s ability to back more high-profile policy reversals is not infinite. On some key issues of concern to Washington, it is outright impossible to imagine a U-turn by Iran’s supreme leader. And Americans should be forgiven for feeling baffled by the Iranian state’s mixed signals. On July 10, as Iranian negotiators were fine-tuning the details of the historic nuclear deal with American colleagues at Coburg Palace Hotel in Vienna, Iran held its annual Quds Day.

This is a day of solidarity with the Palestinians and the chants of “Down with America” and “Down with Israel” were as loud as previous years. This state-orchestrated frenzy rightly begs the question about Iran’s built-in inability to move toward the path of moderation on key regional policy questions. It also raises questions about the strength of the consensus in Tehran to turn a new page in relations with the United States.

Build on the deal

In the next few weeks and months, critics of the nuclear deal will make the point in Washington that Iran’s intention was always only about having the sanctions removed, but not to change its intrinsic hostility toward the United States and her allies. It is to a great extent up to Khamenei to prove them wrong. He has already laid the ground. “If the nuclear negotiations process is successful, we can see where else we can potentially cooperate [with the Americans],” he said recently.

However, to expect Khamenei’s “heroic flexibility” to extend to the question of Iran’s nonrecognition of the State of Israel is to engage in wishful thinking. It would not happen, not while Khamenei is at the helm. But a middle ground might be possible.

During the presidency of the reformist Mohammad Khatami (1997-2005), Tehran moved closest to the consensus in the Islamic World on the question of Israel. It would recognize any peace deal that the Palestinians reach with Israel and would cease to undermine the peace process. Today, Tehran has absolutely nothing to lose by adopting such a policy on this critical question for the future of the Middle East.

Tehran’s largest Palestinian client, Hamas, has proven to be entirely unreliable as demonstrated by the bitter split over whether to support the Assad regime in Syria. Hamas’ political leader, Khaled Mashal, remains a persona non grata in Tehran.

Meanwhile, polls among Palestinians show that Iran, despite over two-decades of financial and military support for the armed resistance, is unpopular. According to Pew Research Center, Palestinian approval rate of Iran dropped by 21 percent between 2007-2015. No doubt the Israeli prime minister Benjamin Netanyahu’s often-over-the-top depiction of Iran’s regional intentions makes it harder for Khamenei to tone down his anti-Israeli stance, but he can surely lead the process to at least deemphasize the issue of Israel in Iranian foreign policy. He would not do it for Netanyahu, but for the sake of Iran’s own national interest.

It makes plenty of sense to do so. Khamenei does not need to deliver on Netanyahu’s explicit demand for an “unambiguous Iranian recognition of Israel’s right to exist.” All he needs to do is to stop the public fixation on the question of Israel. That is, after all, exactly what the vast majority of the fifty-seven Muslim-majority states do today. Doing so will help Iran return to the regional and international mainstream.

To paraphrase Henry Kissinger, Iran needs to decide if it is a cause or a nation-state. If it is the latter, any honest reassessment of the last thirty-six years of Iranian ideological obsession with Israel will show it has been long on costs and very short on tangible gains that lift the lives of ordinary Iranians. As the taboo of dealing with America has been broken, more and more voices in Tehran might just decide to push back on the Islamic Republic dogma on Israel as well. As prominent Iranian academic Sadeq Ziba-Kalam has repeatedly stressed in public debates in Tehran, “It is time for Iran to stop the obsession with Israel.”

After twelve years of back and forth, a nuclear deal has now been reached. The international consensus around it is pretty impressive. The key is to keep it sustainable and to do that it requires for Iran and the United States to look for ways to build on this agreement. President Rouhani speaks of Iran’s return to the international mainstream and his foreign minister Javad Zarif has already suggested that further cooperation on regional issues is in the cards. The U.S. Secretary of State has also hinted at it.

As we move forward, Ayatollah Khamenei occupies an uncomfortable place. During his twenty-six-year tenure as supreme leader, he has helped cultivate a pathological anti-Americanism in the political culture of the Islamic Republic that will now be increasingly untenable in this post-deal environment.

And yet as last week’s Quds Day demonstrations illustrated, not all the pieces are in place in Tehran for a bigger breakthrough in U.S.-Iranian relations. Eyes need to be kept on Khamenei. He can’t have it both ways: be simultaneously in favor of backing Rouhani’s call for moderation and stick to some of the most self-defeating and bad old ways of the Islamic Republic. Something’s gotta give.

Alex Vatanka is a Senior Fellow at the Middle East Institute in Washington Institute.