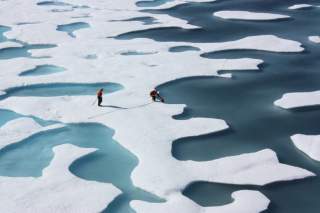 President Obama’s weekend proposal for new wilderness protections in the Arctic National Wildlife Refuge in Alaska, his proposed limits on offshore leasing and new production in the National Petroleum Reserve, along with his recent Executive Order, “Enhancing Coordination of National Efforts in the Arctic,” suggests that the White House has begun to move quickly on developing and trying to coordinate its Arctic policy.

The Arctic is not empty, and its environment, ecosystems, and peoples are facing abrupt changes. Warming waters and retreating sea ice are forcing adaptation to a “new normal,” a “normal” that is likely to see considerable growth of commercial activity in the long term. Technological advances will enable us to operate safely, sustainably, and accountably in what has been, and will remain, a rugged, remote, and fragile region. Such commerce will require informed, competent, and coordinated policy to deal with current and increasing human activity in a harsh yet delicate environment.

Recent events do suggest that we may not be quite Arctic ready.

In early December, a South Korean fishing trawler sank in the frigid waters of the Bering Sea, 15 miles inside Russian waters. U.S., South Korean, and Russian coast guard aircraft and rescue ships managed to come from extreme distances on a futile search for 52 missing crew members.

Harsh conditions coupled with geopolitical and economic uncertainties have put oil and gas exploration in the region on hold. Last year Royal Dutch Shell suspended a multi-year effort to explore for oil in the Chukchi Sea off the northwest coast of Alaska after spending some $6 billion in drilling costs, litigation fees, and community stakeholder meetings.

It was hardly alone in that regard. In December, ExxonMobil pulled back from its estimated $900 billion potential joint venture with Russia’s Rosneft, a target of western sanctions. Chevron similarly notified Canada’s National Energy Board last month that it is “indefinitely” withdrawing from its regulatory approval process, given the “economic uncertainty” brought about by plummeting oil prices.

The Kremlin has made reinforcement of the Northern Sea Route a priority, as much for nationalist reasons as for opening a new “international transport artery.”

With the world’s largest icebreaker fleet consisting of more than 30 ships, six of which run on nuclear power, Russia requires a lead by one of its icebreakers for northern shipping depending upon vessel classification. The nuclear-powered ships, unlike their diesel counterparts, require no refueling, do not discharge diesel contaminants into the sea, and are capable of navigating the thickest of Arctic sea ice. Russia plans to build 10 new navigational and emergency centers along its northern shores to strengthen its infrastructure and port facilities.

New icebreakers are critical not only for Russia’s ability to escort vessels across the Northern Sea Route but also to serve as a key element of Moscow’s strategy to collect data to aid in the expansion of the boundaries of its outer continental shelf.

China’s icebreaking research vessel, the Snow Dragon, has conducted six expeditions through the Arctic Ocean, while Beijing has conducted at least 30 scientific expeditions to Antarctica since 1984. China is one of 12 countries that have been admitted as observers to the Arctic Council, the intergovernmental forum of the eight nations with territory inside of the Arctic Circle, as have Italy, Singapore, and India, each with its own interests in the Far North.

The United States is preparing to assume the chair of the Arctic Council and will take over the reins from Canada in April for its two-year term. President Obama has announced three main goals of the U.S. chairmanship, to focus on climate change mitigation and adaptation (such as ocean acidification and black carbon awareness), Arctic Ocean safety and stewardship, and sustainable circumpolar communities.

The 14 million Arctic residents, including indigenous peoples, have the most to gain—or lose—from Arctic development. They must be able to participate meaningfully in the process that finds a balance between development projects for much needed jobs and physical and social infrastructure, and the protection of onshore and marine environments. Commercial development, increased government security, and burgeoning shipping and energy activity cannot come at the expense of local residents.

In its effort to put its own stamp on Arctic Council policy, the United States should find a way to carry on what Canada has started, and continue to give attention to how local economies integrate with national economies. This can open the door for the White House to galvanize science, technology, engineering—including commercial activity to advance the capacity of industry to develop in a manner that can be environmentally sustainable—and carbon neutral.

Senator Lisa Murkowski (R-AK) has strongly criticized the administration, which she said had “declared war on Alaska” for its recent move in ANWR. She previously had chastised the federal government for being the only Arctic country without a policy for the region. While last week’s executive order suggests that coordination among the 22 federal agencies responsible for Arctic policy is imperative, it also acknowledges the importance of working with the State of Alaska and its native peoples. Federal Arctic policy, now seemingly firmly grounded in taking any kind of action on climate change, is viewed at odds with Alaska’s priority of human and economic development and cooperation among all Arctic nations.

At a press conference on Monday, Murkowski said neither the Alaska congressional delegation nor the governor was contacted to discuss the president’s plans. Alaska State Representative Benjamin Nageak, the only U.S. legislator in America born in the Arctic National Wildlife Reserve, spoke with emotion as he noted in an online broadcast that the president’s policy would prevent his people from developing their resources. Nageak argued that their subsistence hunting and fishing can coexist with resource development, and added that regarding the lower 48, “Treaties have been made and broken because they wanted more of our land. It has not changed.”

U.S. Arctic policy cannot ignore how the United States will manage long-standing and yet-to-be-developed resources. It should also include serious attention to managing the increasing maritime traffic through the Bering Strait, starting with the Coast Guard’s proposed 8-mile wide shipping route. It must also jump-start construction of icebreakers to be able to protect its maritime interests in the Arctic. The United States must also work carefully to maintain positive relations with Russia, which covers half the Arctic, so that coordination on disasters, such as the December sinking of the South Korean fishing trawler, is more quickly and efficiently managed.

Through the Arctic Council, or on its margins, the United States and the Russian Federation must find common ground to cooperate on scientific, maritime, and search and rescue issues.

The leadership role for the Arctic Council, while important in its own right, offers the United States an opportunity to define its Arctic national interests and develop appropriate policies with local stakeholders. It cannot wish away commercial activity under the guise of protecting the environment.

If we do not actively define our interests in the Arctic, they will be defined for us by others.

David N. Biette is the Director of the Canada Institute at the the Woodrow Wilson International Center for Scholars. Anita L. Parlow is the recent advisor to the Harvard-MIT Arctic Fisheries Project.