The Problem Neither Obama Nor Bush Could Solve 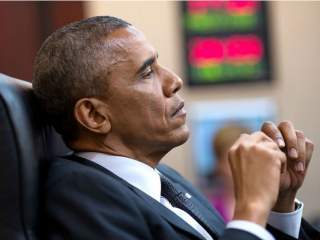 THE 2016 PRESIDENTIAL campaign is turning into a mirror of the 2008 race. Democratic frontrunner Hillary Clinton seeks to distinguish herself from the policies of the sitting chief executive, while sundry Republican candidates maintain that Obama’s incompetence has made America less safe and diminished its position in the world. No one seeking to become Barack Obama’s successor is promising to continue his approach in foreign policy, just as, in 2008, no one ran on a platform of adopting the policies of the George W. Bush administration.

As much as Democratic partisans may resent the comparison, President Obama, entering the final stage of his second term, seems to be presiding over a foreign-affairs trajectory similar to the final years of the Bush administration. Obama’s tenure has been defined by a deterioration of the U.S. position in the international order; growing anti-American sentiment as reflected in public-opinion surveys around the globe; an increased willingness of rising and resurgent powers to challenge American presence abroad; and difficulty in assuring friends that Congress will honor the key agreements the President conducts with foreign leaders. These difficulties are fomenting profound unease among the American electorate about its future safety and prosperity. According to Republican foreign-policy practitioners, the Obama administration will leave office in a year’s time stymied by the same obstacles that bedeviled his predecessor’s administration: the inability to understand Russia’s position in a post–Cold War world without alienating American allies and the struggle to set Afghanistan and Iraq on sustainable paths to peace and stability. The challenges in those areas endanger in turn a third U.S. goal—pivoting towards East Asia. Democrats today no longer enjoy any advantage over Republicans in terms of competence in foreign policy or national security. The final quarter of the Obama presidency has eroded any of the gains made by Democrats over the past ten years in that area. This is quite an unexpected reversal of fortune.

BARACK OBAMA was inaugurated in January 2009 amid general optimism that his administration would repair the damage done to U.S. foreign policy during the tenure of George W. Bush in the White House. The expectation was that Obama would remove the United States from entanglements in the Middle East and heal tensions with Russia. Under Obama’s leadership, Democrats were eager to demonstrate their superior skill in handling the nation’s security. Unlike their Republican predecessors, they knew how to use military force more effectively, build more lasting and comprehensive international coalitions (especially with the trans-Atlantic allies), and produce tangible results. By Obama’s second term, the European Union would become a major contributor to global security, relations with Russia would stabilize, the first seedlings of democracy would take root in Middle East and the grand rebalance to the Asia-Pacific would be within reach.

This ambitious plan was codified in the 2011 Defense Strategic Guidance, which was supposed to steer U.S. defense spending for the remainder of Obama’s tenure in office. Five years later, however, these expectations are not aligning with reality. Hopes that Washington could usher the Arab Spring into a glorious summer of democracy have been replaced by the pessimism of an Arab Winter, with states collapsing and extremism on the rise. The Obama administration is preparing to leave office with the Iran nuclear issue essentially frozen for a decade—they were potentially successful in preventing a short-term Iranian dash to weapons capability, but they have left larger concerns about Iran’s intentions unresolved. Russia’s resurgence and its unwillingness to accept the post–Cold War settlement in Europe, together with the European Union’s own ongoing internal travails, have dashed hopes that Europe could become a security provider to augment U.S. efforts elsewhere. A rising China seems prepared to test American commitments in Asia as it seeks to redefine a regional order that the United States has underwritten for many decades. The fate of landmark trade deals that would put the United States at the center of both trans-Atlantic and trans-Pacific economic areas remains in doubt. Polling data collected at the end of 2015 suggests that Americans feel more unsafe and believe that the Obama administration’s policies are not sufficient to ensure the safety and security of the United States in what they see as an increasingly dangerous and chaotic world.

WHY HAS THIS happened? Why has the Obama administration, like its predecessor, been unable to set America on the road to a durable, enduring, bipartisan foreign-policy consensus that can guide the United States towards success in the world of the twenty-first century? Why is every candidate hoping to succeed Obama in the White House finding fault with how he has conducted foreign affairs?

The president’s supporters maintain that an intransigent international and congressional leadership is to blame. Abroad, Vladimir Putin, Bashar al-Assad, Xi Jinping and others are responsible for the failure of U.S. policies; at home, Republican leaders like Mitch McConnell and John Boehner are the ones who should be held responsible for deficiencies in U.S. policy, having stood in the way of the president’s agenda. Detractors—not only Republicans in opposition but also some Democrats looking to create some distance between Obama’s legacy and the Democratic Party’s “brand” in national security—focus the blame squarely on the president. According to an unnamed former White House official in a Michael Crowley essay in Politico last October, U.S. national-security policy “is driven by one man, and one man only, and it is Barack Obama.”

It is true that any president does much to define his administration’s foreign-policy priorities and processes, and former secretary of defense Robert Gates’ December 2015 op-ed in the Washington Post lays out the personal characteristics that a chief executive must possess to be successful in governing effectively. While personal characteristics are important, it feeds into an American tendency to see mistakes in U.S. national-security policy not as a sum of errors endemic to a complex system, but as the fault of a particular presidential administration or even a particular president. This popular but mistaken view holds that the setbacks experienced in American foreign policy are the results of errors in programming and execution made by a national-security team. This avoids the more rigorous question: are those errors instead attributable to fundamental flaws in America’s perception of the world and its own place in it?

Indeed, the roots of Obama-era dysfunction precede his election by at least a decade, before Obama was even a national figure; they arise from the still-unhealed 2002 Democratic schism over the impending war in Iraq. Beyond that, the problems experienced during the Obama years reflect an increasing sclerosis in the U.S. policy process itself that has made it far more difficult for Washington to implement effective policy. If nothing is done, this dysfunction is likely to continue into the next administration, regardless of party.

LIKE SENATOR Obama, Governor George W. Bush played down any Wilsonian beliefs he may have held during his 2000 presidential campaign in favor of running as a pragmatist with a more realistic and restrained approach to American foreign policy. Bush contrasted his rhetoric with the triumphalist Clinton administration’s assertion that the United States was the world’s “indispensable nation,” but the events of 9/11 changed all of that. In responding to the September 11 attacks, Bush was faced with a choice: to frame the forthcoming campaign as a limited, antiterrorist operation, or to fall for the siren song that an opportunity had arisen to reshape the Middle Eastern and global orders by harnessing American power in the service of American ideals. By choosing this more expansive option, the Bush administration—along with many Democrats—fell into the trap that this vast endeavor could be executed on the cheap, without much sacrifice or expenditure. The source of the hubris that defined the initial plans for the war in Iraq was an oversimplified belief that an operation could both oust Saddam Hussein and put the country on the path to a sustainable democracy by Christmas 2003 with minimal U.S. forces, with Iraq footing the bill from its oil revenue.

While only a few House Republicans (and some prominent members of the Republican corps of grey eminences) spoke out against the proposed invasion as a costly and reckless gamble, Democrats were much more divided. The traditional anti-interventionist left opposed attacking Iraq, but the centrist core had no particular ideological objections to intervention per se. When the tally of the vote in Congress was taken in 2002 on whether to give President Bush the authority to use force in Iraq, the schism among Democrats was in full display: 39 percent of House Democrats and 58 percent of Democrats in the Senate—among them the party’s presumptive future presidential nominees John Kerry and Hillary Clinton—voted in favor of invading Iraq.

This initial bipartisanship, solidified by Baghdad’s rapid fall, crumbled as the war dragged on and public support waned. Yet the Democratic Party could not reconcile whether the idea of intervention itself was a bad thing—or whether Hussein’s removal could have been better orchestrated by Democrats (who might have been able to get a United Nations resolution, secure meaningful support from allies or otherwise run the occupation more effectively). The seesawing between these two positions led to the memorable moment in the 2004 campaign when Senator John Kerry tried to explain how he could simultaneously be for and against the Iraqi operation.